A STRANGE (AND POWERFUL) LOVE: OR HOW I LEARNED TO STOP WORRYING AND LOVE THE NEW EVANGELIZATION 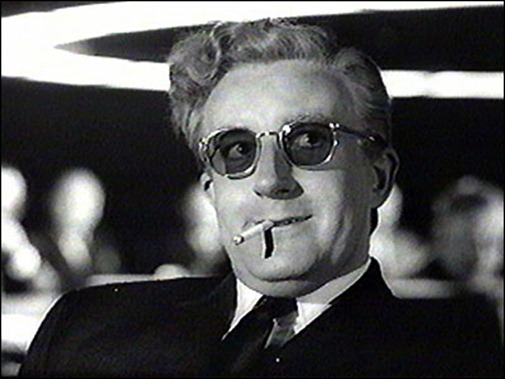 “Of course, the whole point of a Doomsday Machine is lost, if you KEEP it a SECRET! Why didn't you tell the world, EH?” – Dr. Strangelove

As noted in the my last post, The B-Movie Catechism will be participating in the Year of Faith by, among other things, having another go at reading through the entire Catechism in one year. In fact, I’m going to follow the advice of regular commenter Xena and not just read the CCC, but pray it with Lectio Divina. And since part of Lectio Divina is to “pause and recall if some word or phrase stood out or something touched one’s heart” I thought, hey, maybe a few times a week I could use that as fodder for rambling blog posts share anything interesting that might come to mind while reflecting on the readings. Oh, and obsessively find a way to connect it to some movie, of course. This is The B-Movie Catechism, after all. If you want heavyweight commentary, it’s probably a good idea to find a blog that doesn’t use a Zuni Fetish Doll as its avatar.

So what stuck out during the very first day? Well, since a part of the Year of Faith is to promote The New Evangelization, I couldn’t help but be struck by how much the first ten paragraphs of the CCC concentrate on… wait for it… evangelization. Paragraph 1 appropriately starts with explaining how “God sent his Son as Redeemer and Savior” but then paragraph 2 immediately jumps into “Go therefore and make disciples of all nations, baptizing them in the name of the Father and of the Son and of the Holy Spirit, teaching them to observe all that I have commanded you.” and then keeps on going with stuff like “Those who with God's help have welcomed Christ's call and freely responded to it are urged on by love of Christ to proclaim the Good News everywhere in the world.”

Look, I know a lot of Catholics are uncomfortable with the idea of verbally communicating their faith to others. At least I know I am, preferring the idea of ‘show, don’t tell’ when it comes to living breathing face to face conversations. But the Catechism seems pretty clear in reminding us that Christianity is a ‘show AND tell’ kind of religion. And why shouldn’t it be? After all, if what we believe is true, then we’re talking about developing a deeply personal relationship with the creative force of the universe, a love affair with the mind of eternity played out through the mundane actions of our day to day lives (clever people will catch onto the fact that I just described a sacramental marriage, probably one of the reasons why God calls the Church his bride), so why wouldn’t we want to use every means at our disposal to share access to that with others? It’s kind of like that famous quote from Dr. Strangelove wherein Peter Seller’s titular character laments the fact that the Russians didn’t announce their doomsday weapon until after it had been triggered. What good is having a thing of such ultimate consequence if you never bother telling anyone about it until it’s too late? And what could possibly be of more consequence than our personal relationship with God? Why aren’t we telling the world, EH?

Email ThisBlogThis!Share to TwitterShare to FacebookShare to Pinterest
Labels: Year Of Faith

My daughter mentioned today that she had to buy a copy of the YouCat - apparently Ignatius Press has produced a version of the Catechism for teens. She too is reading it over the course of a year. I've read many of John Paul II's encyclicals but not the catechism. It's time. A great feeling to be led by example - from your kids!

I've actually been thinking about buying a copy of the YouCat just to see what it's like. I know there were some translation problems when it first came out in France, but I think everything's okay now.