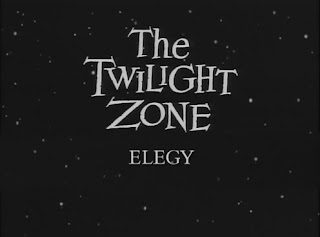 “Three astronauts land on what looks like Earth 200 years before they left - only all of the people seem frozen in time.”

Charles Beaumont met Ray Bradbury in Los Angeles during the summer of 1946 where the two quickly became friends due to a shared love of comic strips. That’s right, two of science fiction’s most celebrated authors bonded over a shared love of the daily funnies which, if nothing else, shows they were men of good taste. But I digress. Bradbury quickly became Beaumont’s mentor, reading and offering suggestions on the aspiring writer’s early efforts. And nothing could better illustrate Bradbury’s influence on Beaumont’s work than Elegy, the 20th episode of The Twilight Zone.

What with its Terran space travelers discovering an alien world that looks a lot like home, though with some noticeably weird differences, the entire tale plays like something right out of Bradbury’s Martian Chronicles. That being said, Beaumont’s story is definitely a bit darker than most of Bradbury’s output. Despite all of the whimsical elements on display, particularly Cecil Kellaway’s excellent turn as the planet’s ever-smiling tour guide/caretaker Wickwire, Elegy ends on a very bleak note.

And yet, it’s that oddball mixture of tones that makes the episode so memorable. The end, in which the distressingly cheerful Wickwire flat out murders our entire crew of protagonists, probably wouldn’t pack such a gut punch if we hadn’t been lulled into a false sense of security by the goofiness which preceded it. I mean, as the astronauts are walking through the various silly set pieces such as the beauty contest with the somewhat elderly pageant queen, who would suspect all the people on display are really preserved corpses on an asteroid sized graveyard. 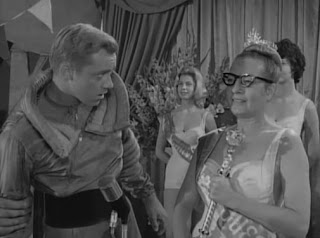 In an interview with Cemetery Dance magazine, Beaumont’s son Chris stated his belief that his father “saw the show as an opportunity to ask profound, philosophical questions in the guise of a good yarn.” Which begs the question, what underlying profundities is the author trying to get at with Elegy? Well, on that point, Jordan Prejean over at The Twilight Zone Vortex makes a pretty good guess. He notes…

“It seems that Beaumont is attempting to show us how we view ourselves and want others to view us as well. The entire premise of this episode, the idea that people would build a sprawling customized cemetery on a drifting asteroid in the middle of outer space, is absurd, as one of the astronauts points out. But the absurdity exists for a reason. Beaumont’s trying to draw the viewer’s attention to the fact that most people value their own self-image enough that even after they die they want to be put on display for others to see, like a piece of art in a museum.”

In short, Beaumont seems to be taking a jab at that same type of narcissism as Ambrose Bierce did in his Devil’s Dictionary when he defined a mausoleum as “the final and funniest folly of the rich."

You know, the Church has never said that attaining a certain status in life is a sin. In fact, St. Paul himself relied on quite a number of wealthy women to help support his ministry. But in his letters, you never find praise for their wealth or position of power or anything like that. It’s all about the service they provide to the Church and to those in need, the same praise he heaps on those who perform the same deeds but have attained less illustrious stations in life.

Status is fine if attained a by-product of one’s calling, but it must never be the goal in life (or death for that matter). No, that focus must be on something else. As the Catechism puts it, “Desire for true happiness frees man from his immoderate attachment to the goods of this world so that he can find his fulfillment in the vision and beatitude of God. 'The promise [of seeing God] surpasses all beatitude… In Scripture, to see is to possess… Whoever sees God has obtained all the goods of which he can conceive.”

Twilight Tidbits: Keen ears may recognize the sound effects heard inside the Earthmen’s spaceship. They would be recycled less than a decade later on the bridge of the USS Enterprise.