DEVIL DOG: THE HOUND OF HELL 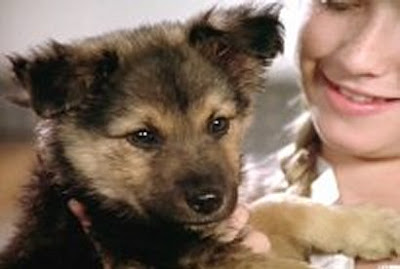 "It could be pretty creepy ... if it weren't so darn stupid." - Scott Weinberg, DVDTALK.COM

A coven of satanists devise a scheme to cross breed a German Shepherd with Lucifer resulting in the birth of a litter of devil dogs. (That's as logical as it's gonna get, folks.) One of the evil pups is adopted off to the Barry family, who can't seem to understand why everyone but themselves finds the little nipper so darn creepy. It's not long before the Devil Puppy unleashes the dread power of its glowing green eyes on the family's devout Catholic maid, whose subsequent death is considered an accident by the Barrys. These kinds of "accidents" continue 0ver the next year or so as the dog slowly seduces mom and the kids over to the dark side. Dad, however, ever so slowly grows suspicious of the family pet, especially after the Devil Dog tries to convince him to put his own hand into the lawn mower. Not knowing where else to turn in order to defeat Satan, the beleaguered father cries out to God to... no wait, that's not what he does. The father flies to Ecuador so a tribal shaman can tattoo his palm. (Take that Satan!) With the Evil One's doom in hand, literally, Dad lures the Devil Dog into a final confrontation.

I have to admit I had high expectations for Devil Dog as the movie has, for lack of a better way of putting it, something of a pedigree. The director, Curtis Harrington, was a genre veteran who helmed such dubious achievements as Voyage to the Prehistoric Planet, Ruby, and Whoever Slew Auntie Roo? Better yet, Devil Dog was written by The Karpfs, the same team who scripted Gargoyles (hands down one of the best made-for-TV horror films of the 70s) and A Cry In The Wilderness (hands down THE best man-bitten-by-a-rabid-skunk movie ever filmed.) The acting credits were also solid with Richard Crenna, Yvette Mimieux, and Martine Beswick, all beloved genre stars. Heck, you even had Ike Eisenmann and Kim Richards (Tony & Tia from Disney's Witch Mountain movies) once again playing brother and sister. And even if it didn't have all of that, it's still a movie about a DOG FROM HELL, which you think would guarantee a little cinematic fun.

But it doesn't, at least not enough. First off there's the not-so-special effects. It's not just that they're sub-par (that's often part of the fun of these movies, i.e. Robot Monster), it's that there shouldn't be any to begin with. If you think back on all of the effective devil-type movies, the horror is almost always in the suggestion of the evil rather than in the showing. Rosemary's Baby gives you only one blurry close-up of some devil-eyes and a claw. The Omen has the weirdest kid ever, but no monster. Night Of The Demon doesn't have one shot of the creature until the very last scene, and even then it might be a hallucination. Even The Exorcist, which does go full blown with the makeup and pea soup near the finale, spends most of its time in an excruciating build-up. It's frustrating, because the creepiest scenes in Devil Dog are exactly the ones that show the hound doing nothing but standing there watching, studying, plotting. (One of my cats does this a lot. Between that and the hairballs I'm beginning to question its origins.) Rather than stick with what works, however, the filmmakers decided what Devil Dog really needed was lime green glowing eyes, which appear whenever he's exerting his will. It's a real mood killer. And the less said about the dog's transformation at the end, the better. Let's just say that if a dog in a fright wig and plastic horns is the best Satan can do, he's been seriously overrated all these years. (And he probably really wears that red spandex body suit too.)

The effects would probably be more bearable if the story made a bit more sense. The script really feels like a rushed first draft, like an initial run through just to get the basic ideas on paper. Episodes are strung together piecemeal, with awkward transitions that jolt you right out of the story. The scene in which the family discovers the charred body of their maid is immediately followed by a scene of the family getting out of the car laughing and carrying on like nothing just happened. You spend a couple of minutes thinking what cold hearted cretins these people are before you learn that a year has passed for the characters. Occasions where the father discovers terrible things are happening in his household (the kids are caught scrawling images of demons on the walls, his loving wife informs him she's now the town tramp, his family reacts to the neighbor's death with scorn and laughter) are followed by moments of startling blandness. Where most movies try to escalate the tension as they speed to a conclusion, Devil Dog stumbles and lurches, never gaining any momentum.

And that's a shame, because Devil Dog actually has a good central idea, one not even touched on in it's big budget predecessors like The Exorcist or The Omen. In those films, Satan is pretty much in your face, trying to accomplish his goals by a show of power. But as Cardinal Jorge Arturo Medina Estevez, Prefect of the Congregation for Divine Worship and the Discipline of the Sacraments (His business card must be the size of a postcard.) pointed out on the release of the New Rite of Exorcism in 1999, "Diabolical obsession is not the most frequent way the spirit of darkness exerts his influence...the harmful influence of the Devil and his evil spirits is normally exercised through deception, falsehoods, lies, and confusion."

In Devil Dog, the corruption and disintegration of the family takes place over a couple of years as the dog helps them gain the world, but lose their souls. Through the introduction of something as seemingly innocent as a puppy, the typical suburban family is eventually brought to the point where the father has no authority, the mother is a whore, and the children accept any means necessary to get the material things they want. (You know, this devil dog thing is starting to sound frighteningly plausible.) Really, if you ditch the whole third act nonsense involving the South American witch doctor and the glowing body art, Devil Dog shows (in a similar vein to Lewis' Screwtape Letters) that "the gentle, sliding slope of habitual small sins is better" than any big display of evil in achieving the Devil's goals.

Unfortunately, with all that cool subtext, the makers of Devil Dog went for the big action finale. (Well, if standing in front of a blue-screen while the projected image of a giant dog in a Halloween costume barks at you counts as big.) And why shouldn't they? Let's face it, levitating beds and 360 degree spinning heads are crowd pleasers. Thanks to the movies, even most Catholics think of exorcism in terms of the big formal ritual. But the Church recognizes the need to combat spirtual attacks at all times, not just those requiring the "Rituale Romanum". That's why the sacrament of baptism actually contains a prayer of exorcism as part of the ceremony, as do a number of ceremonies involving catechumens. Pope Leo XIII published a simple prayer of exorcism for use by all Catholics in their daily mediatations. Even the mass itself used to include a small prayer of exorcism, though that has slowly disappeared since Vatican II. (Feel free to read that however you want to.) As St. Augustine noted, this doesn’t imply that we’re all "possessed". It’s just a recognition of the daily battle against temptation and the daily obsessions we all have that interfere with our spiritual advancement. Because, if we take the time to look, it's likely we all have a Devil Dog lurking around somewhere, panting sweet nothings into our ears.

The Church readily admits that a good number of the cases in history blamed on demonic possession were probably due to pathological mental conditions unrecognized by the medicine of the time. That’s why the Catholic Church doesn’t just jump straight into an exorcism. As the Catechism points out, "Exorcism is directed at the expulsion of demons or to the liberation from demonic possession through the spiritual authority which Jesus entrusted to his Church. Illness, especially psychological illness, is a very different matter; treating this is the concern of medical science. Therefore, before an exorcism is performed, it is important to ascertain that one is dealing with the presence of the Evil One, and not an illness." Only when all other explanations have been exhausted is demonic possession considered a likely cause and the ritual of exorcism given the go-ahead, and even then "the priest must proceed with prudence, strictly observing the rules established by the Church."

But inherent in all of this is the belief that these things actually exist, that imperceivable "somethings" actually influence our lives on a daily basis. That's a hard sell these days. But there's hope. Emerging scientific concepts like String Theory are beginning to put forth the notion that empirically unmeasurable forces actually coexist and interact with our perceived reality. And while that absolutely in no way proves the existence of anything "spiritual", it does seem to be a baby step in the right direction. Who knows, given a few more generations, science might advance to the point where it once again recognizes something everybody else seems to already have known.
Posted by EegahInc at Tuesday, May 22, 2007

Of course, there's nowhere to go but up when you begin the peice by writing about a movie where the central character is a dog with a fake afro.

Not since The Killer Shrews have so menacing a creature stalked the screens!