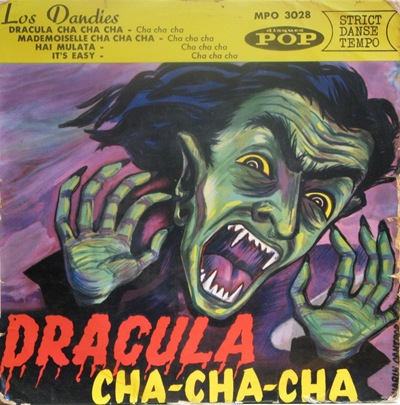 and if you like that album cover, there's plenty more where that came from at LP Cover Lover.

What movie theater worth its salted popcorn doesn't play music in the auditoriums in between shows? Well, we're no different around here although, as might be expected, the choice in tunes is not quite the same as you'll hear over at your local metroplex. Take this little diddy, for instance, courtesy of The Dracula Library. Dracula Cha Cha Cha was originally recorded by the man affectionately known as the Prince of the Night Clubs, Italian composer and songwriter Bruno Martino. Here's the original Italian lyrics followed by the English translation as suggested by Google.

Ah! Ah! non far più lo spiritoso [not to make the most witty]
qualcuno può arrabbiarsi e darti uno schiaffo. [someone may get angry and give you slap.]

Okay, so Google's word for word literal translation, while enjoyably descriptive ("Why not you juice a nice chicken?" Yuck.), leaves a bit to be desired in the readability department. Readers of sacred texts are more than familiar with this dilemma. Take our Christian Bible for example. The original manuscripts were written in two languages no longer spoken anywhere; Classical (Archaic) Hebrew and Koine (Hellenistic) Greek. From there it was translated into Classical Latin, Armenian, and a few others. We didn't start getting English translations until the Venerable Bede began working on one in the late 600s. Today there are literally (no pun intended) dozens of English translations to choose from.

Which raises the obvious question: which available translation is the best? The folks over at Catholic Answers have a short Bible Translations Guide which covers the different methods of translating the ancient texts into a new language and suggestions on how to pick the one best suited to your use. They really like the Revised Standard Version: Catholic Edition, which appears to be the translation of choice for Apologists. The USCCB uses the never published third revision of the New American Bible for readings in mass. This translation doesn't appear to get much respect in scholarly circles, but the USCCB owns the copyright, so I don't think it's going anywhere anytime soon. Here at the B-Movie Catechism we use whichever one is appropriate for the topic, but prefer the 1966 Jerusalem Bible for casual reading. Yeah, it has its gaffes like any other translation, but J. R. R. Tolkein was one of the editors and it reads like a dream. What's the worst translation? Well, that's an ongoing argument, but everyone except the Jehovah's Witnesses tends to look poorly on the New World Translation, the only version of the Bible translated by the Jehovah's Witnesses. And since we are on the Internet, it's hard not to mention... The LOLCat Bible.

And what does the Catechism have to say on the subject? "The Church "forcefully and specifically exhorts all the Christian faithful... to learn the surpassing knowledge of Jesus Christ, by frequent reading of the divine Scriptures. Ignorance of the Scriptures is ignorance of Christ." As for a specific translation, it makes no specific recommendation. Perhaps, in the end, the best translation of the Bible is the one you'll actually pick up and read.

Please credit my photo with a link to: www.lpcoverlover.com Thanks!

I did near the bottom of the post, but I'll happily put another more prominent link near the top. Thanks for all the time you put in on LP Cover Lover by the way, it's one of my favorite blogs.

Thanks. I didn't notice it at the bottom!

It may interest you to know that an independent, unbiased study/comparison was done of a number of contemporary translations of the Bible and Jehovah’s Witnesses’ “New World Translation” came out on top. To examine some discussion on this, please consider the contents of the following website:

“‘Truth In Translation: Accuracy and Bias in English Translations of the New Testament,’ by Jason David BeDuhn.”
http://mysite.wanadoo-members.co.uk/newworldtranslation/beduhn_truth.in.translation.book.htm

You may also wish to examine:

“Is The New World Translation Biased and Unscholarly?
http://mysite.wanadoo-members.co.uk/newworldtranslation/nwtbiased.htm

And, perhaps, this too:

"THE WORLDS MOST DANGEROUS BOOK"!!
http://mysite.wanadoo-members.co.uk/newworldtranslation/dangerous.htm

Hi JohnOneOne, thanks for dropping by and leaving a comment, as well as suggestions for more reading materials.

I also appreciate your charitable approach in responding to my post. While I suppose what I said could be taken as a cheap shot at your religion (I'm assuming you're a JW; the choice of JohnOneOne seems something of a giveaway), I do believe I was accurate in implying that most non-JW apologists are very skeptical of the New World Translation. I'm willing to listen to Dr. BeDuhn's argument, however, although admittedly, I'll probably wait until I run across the book at a fire sale or something. ($40 softcover? Yow!)

That being said, I couldn't help but notice from looking around the Net that Dr. BeDuhn also looks favorably upon the NAB, the other (Catholic) translation I mentioned in my post which is routinely criticized. I would be lying if I said this didn't raise a warning flag for me just a bit. While the only way for me to know for sure is to read his book, this does leave me with the initial impression that this might be a young professor trying to make a name for himself by being a contrarian. Still, no use rushing to judgment, his book will speak for itself.

Thanks again for dropping by.

Have you seen Forgetting Sarah Marshal? Not a B-Movie, of course, but it does have a Dracula musical that is pretty darn funny.

Haven't seen that one yet, I'll have to throw it on the queue.

I don't worship the ground Judd Apatow walks on. I loved Freaks and Geeks, liked Superbad, but didn't like 40 Year Old Virgin. But if you haven't seen it I'd watch Knocked Up first. It's way better than all of the rest.

Time is one of the most precious and expensive thing in this world so value your time wisely because you can't flashback every wasted time at the past. Time is gold. Visit my site for more information.

Reading your article is such a privilege. It does inspire me, I hope that you can share more positive thoughts. Visit my site too. The link is posted below.Thank you and have a good day.