Don’t watch this If you’ve never seen Chinese Super Ninjas, because it will spoil the end. Also, don’t watch this if you don’t like seeing blood. No, really. I’m talking about fire-hose-spraying, whale-blowhole-spouting geysers of blood. It’s fakey looking, but still, you’ve been warned. 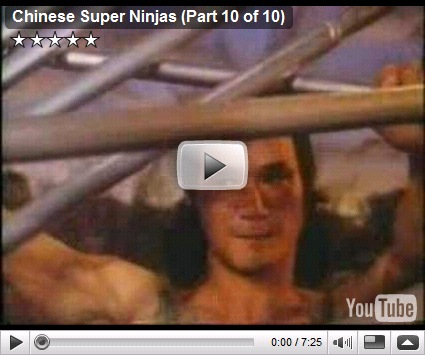 Now, some of you may be asking just what the heck I was thinking posting that clip? But it wasn’t what I was thinking (as I’m rarely accused of doing THAT), it’s what I was reading. Namely, the Bible. As you might recall, I’m still making my way through Holy Scripture using The Coming Home Network’s guide to reading the Bible and the Catechism in a year, and I was reminded of this scene when I happened to run across this tidbit from 2 Maccabees 14.

A certain Razis, one of the elders of Jerusalem, was denounced to Nicanor as a man who loved his fellow citizens and was very well thought of and for his good will was called father of the Jews. For in former times, when there was no mingling with the Gentiles, he had been accused of Judaism, and for Judaism he had with all zeal risked body and life. Nicanor, wishing to exhibit the enmity which he had for the Jews, sent more than five hundred soldiers to arrest him; for he thought that by arresting him he would do them an injury. When the troops were about to capture the tower and were forcing the door of the courtyard, they ordered that fire be brought and the doors burned. Being surrounded, Razis fell upon his own sword, preferring to die nobly rather than to fall into the hands of sinners and suffer outrages unworthy of his noble birth. But in the heat of the struggle he did not hit exactly, and the crowd was now rushing in through the doors. He bravely ran up on the wall, and manfully threw himself down into the crowd. But as they quickly drew back, a space opened and he fell in the middle of the empty space. Still alive and aflame with anger, he rose, and though his blood gushed forth and his wounds were severe he ran through the crowd; and standing upon a steep rock, with his blood now completely drained from him, he tore out his entrails, took them with both hands and hurled them at the crowd, calling upon the Lord of life and spirit to give them back to him again. This was the manner of his death.

So, let me get this straight. To avoid capture, our hero first stabs himself, then throws himself off a building into an angry mob, and finally rips out his own guts and flings them at his enemies…

That. Is. So. COOL!!! I’d totally pay to see a movie with that scene in it. Those guys from 300 look like such total weenies in comparison to this Razis fellow. Still, much like our super ninjas in the above clip, we’re stuck asking the question of Razis, “Why did you do it?” After all, even though the author of 2 Maccabees, in his rah-rah enthusiasm for the Jewish revolt, clearly sees Razis as a martyr, there’s no getting around the notion that his actions ultimately represent a suicide, which as we all know was a big no-no in Judaism. St. Thomas Aquinas certainly doesn’t buy wholly into the martyr idea when he writes in the Summa, “It belongs to fortitude that a man does not shrink from being slain by another, for the sake of the good of virtue, and that he may avoid sin. But that a man take his own life in order to avoid penal evils has indeed an appearance of fortitude (for which reason some, among whom was Razias, have killed themselves thinking to act from fortitude), yet it is not true fortitude, but rather a weakness of soul unable to bear penal evils, as the Philosopher (Ethic. iii, 7) and Augustine (De Civ. Dei 22,23) declare. (Summa Th II-II Qu.64 a.5)”

Now a number of protestant scholars have pointed to the story of Razis as one of the reasons 2 Maccabees shouldn’t be included in the canon of Scripture, insisting that because the human author doesn’t explicitly condemn the suicidal nature of Razis’ actions, it somehow implies God’s approval of suicide. But if that’s the case, then other books would have to go also. (The story of Samson comes to mind.) So, what we have to do is look for some other reason this particular story is noteworthy in the Biblical narrative to see if there’s a good reason for including it in the canon.

And sure enough, there is one, at least according to C. D. Elledge in his book Life After Death in Early Judaism. “One of the many odd, but important, contributions that 2 Maccabees has made to the history of ideas is the notion of a graphically physical resurrection from the dead. This is not simply an assumption of the work, but a deliberate emphasis of at least two different episodes of the narrative. The episode of Razis expresses this in the clearest and most economical terms. This Jewish older, when persecuted for devotion to the law, attempts to end his own life by jumping off a building. When this fails, he eventually takes his own entrails in his hands and casts them out of his body at his persecutors, "invoking the master of life and spirit to return these things to him again' (14:46). In this case, Razis dies with prayers that the very entrails that he loses in death will be returned to him by the One who has supreme power over life and death.”

So, maybe it’s just me, but it would seem having a book in the Old Testament which nails down a pre-Jesus expectation for a bodily resurrection is just a wee bit more important than haggling over whether or not the author let Razis off too easy for his decision. But then again, what do I know? I’m the guy who thought it was a good idea to put Chinese Super Ninjas on his religious blog.

Quite the compelling observation. 1 & 2 Maccabees are under-appreciated, thanks for the post. One thing, not to be nit-picky, but when you wrote "St. Augustine certainly doesn’t buy wholly into the martyr idea when he writes in the Summa," I think you meant St. Thomas Aquinas, who is quoting from Augustine's City of God.

Love your blog. Good to know I'm not the only Catholic B-movie fan out there!

"Those guys from 300 look like such total weenies in comparison to this Razis fellow."

The clip reminds me of Sampson taking out 1,000 Philistines with just the jaw bone of an ass. Except that that guy was only taking on 4.

Wasn't Mel Gibson going to make a movie on Maccabees?

It ain't nit-picky if you're right :) I'll correct the post right away.

"Wasn't Mel Gibson going to make a movie on Maccabees?"

That would be a good fit. He's probably got some spare body parts and a few gallons of stage blood left over after Apocalypto, so all he would have to do is teach his Aramaic speaking actors a bit of ancient Greek and its good to go.

2 Maccabees is one of my favorite books of the entire Old Testament. My priest said one day he is going to do a Bible study on the book and use "Braveheart".

I would totally pay to see a movie made on Maccabees, especially made by Mel Gibson...that would be so awesome.

So, umm, the guy in the black pants that the three Super Ninjas in white are trying to kill--he has, like, the Super-Duper Football Cleats of Death on the bottom of his feet, am I right? Just wanted to clear that up.

While I was watching this I kept thinking, "Gee, Super Ninja Barbie, these new majorette routines are hard!" :)

That's why I feel sad that Protestants miss out on the Book of Tobit, too: blindness caused by bird poo, an angel in disguise, a giant fish, a groom-killing demon, etc.

And speaking of the 300, remember in 1 Maccabees 12 that Arius had sent a letter of friendship to the Jews and they basically said, "We don't need Spartan and Roman alliances because we have the Lord on our side, but don't be strangers because you're like family." (Although, come to think of it, 1 Maccabees is a lot of letter-writing in between the battle scenes...)

"-he has, like, the Super-Duper Football Cleats of Death on the bottom of his feet, am I right?"

Not exactly Wolverine, but it seems to get the job done.

"2 Maccabees is one of my favorite books of the entire Old Testament." AND "That's why I feel sad that Protestants miss out on the Book of Tobit, too"

I joined the Church as a teenager but left soon after to attend another church with a girlfriend. Even so, I still held onto my Catholic Bible a priest had given me and used to love to whip it out at Bible studies. Many were the nights you'd hear yells of "But that book doesn't count!" Afterward, though, I'd often catch them flipping through them because the stories were so enjoyable.