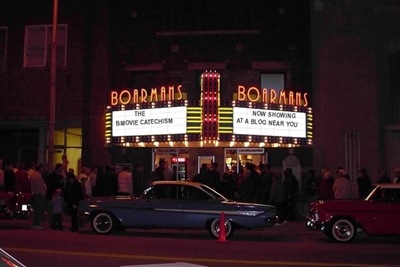 Once again, it’s time to see what the rest of the blogosphere is up to movie wise. For a change of pace, let’s start out highbrow and check in with Image Journal which has updated its The Arts & Faith Top 100 Films list. Given the pathetic lack of stories involving laser blasts and rubber monster suits, I must admit I’ve only seen roughly 15% of the movies on the list, but I’m sure I’ll work some of these into the Netflix queue as time goes by. Be forewarned, popularity seems to be poison for this list, so don’t expect stuff like Passion Of The Christ, but Jeffrey Overstreet attempts to tell you why you should care just the same.

More in tune with our own preferred viewing tastes around here is Author Al Doshna who recently took a look back at Plan 9 From Outer Space. Now, since Mr. Doshna himself expressed interest in my Catholic perspective on the article, I feel begrudgingly compelled to take a light hearted poke at one single tiny sentence in the piece which has Calvinistic overtones regarding the total depravity of human beings. But that’s really nitpicking since, after all, we all agree everything comes from God’s free gift of grace. The article is a good one and takes a unique perspective on “the worst movie of all time” that readers here might appreciate.

Oddly enough, Plan 9 doesn’t make the Cranky Conservative’s list of his Ten Worst Movie Experiences, but there’s plenty of other stinkers that did. You know it’s going to be painful when Pearl Harbor only comes in at number 10.

Speaking of mega-bucks blockbusters, Iron Man 2 is finally on the horizon. That makes it as good a time as any to check out Barbara Nicolosi’s discussion on the disappearing movie hero over at Salvo Magazine. Be sure to scan the comments where a Batfan or two takes exception to her treatment of The Dark Knight.

I guess some folks just don’t like you messing with their icons. That being the case, I wonder what fans of The Shat will make of LarryD’s indulgence in Fumetti (not a sin, look it up) over at Acts Of The Apostasy in which he ponders the notion that Spock would make a good Catholic? While noncommittal on that idea, the fellas at Creative Minority Report do seem pretty sure that Spock’s brother might feel more at home with the Anglicans.

And finally, just in case you thought it was only us laymen who dive into Wal-Mart $5 DVD bin in order to find our entertainment, I give you Msgr. Charles Pope of the Archdiocese of Washington who manages to find deep meaning in the Brendan Fraser opus Blast From The Past. No, really.

Thanks for the link! Just so you know, you are still The King of Theology & Movie Mash-ups.

Okay, I read the Vulcan links and now must undergo the ritual of Kolinahr before I explode.

Kidding. Thanks for the links. They made me laugh!