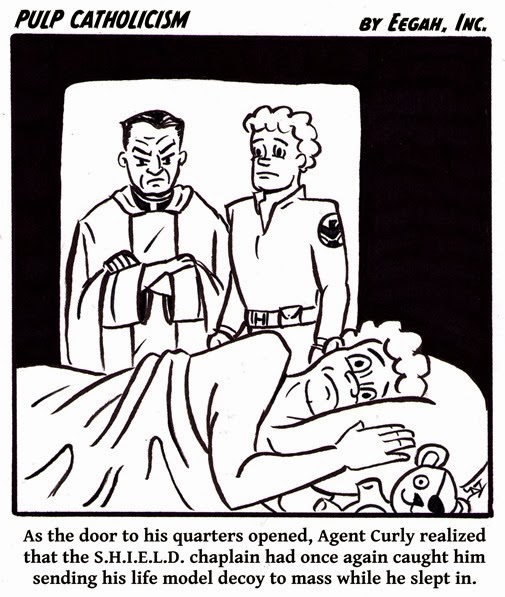 I guess we know your Colson theory. Hopefully the Whedon boys have something more clever up their sleeves? I love the Nick Fury teddy bear!

The LMD would be easy and consistent with SHIELD history, so yeah, it's probably not that. Unless... Coulson keeps tossing around the word magic, so maybe the plot line is a back door to introduce Dr Strange or The Scarlet Witch, perhaps some attempt to bond Coulson's soul with the machine? Who knows, it's a fun show so far, so I can wait to find out.

Glad somebody caught the teddy bear :)

I agree the show is fun and I can't wait for more.

"You have reached the life model decoy of Tony Stark..."

Yeah, Colson himself didn't fall for it, either.

Now I'm going to be wondering how the vestment colors turn out if the S.H.I.E.L.D. guys wear them. This is an improvement over the stuff that has, of late, regularly been running through my head. So, thanks.

And on that note, what color is the teddy bear? Never mind.

Joseph, having a grandfather that worked with/on LANSCE at Los Alamos, I concluded very early in IM 2 that Stark "science" in the MCU is magic. Which universe is it supposed to be, anyway? I keep asking myself.

I'm guessing for mass they would have to stick with the prescribed norms, although I'm sure they would at least break out the black for the Feast of All Souls or the occasional Mass of the Dead.