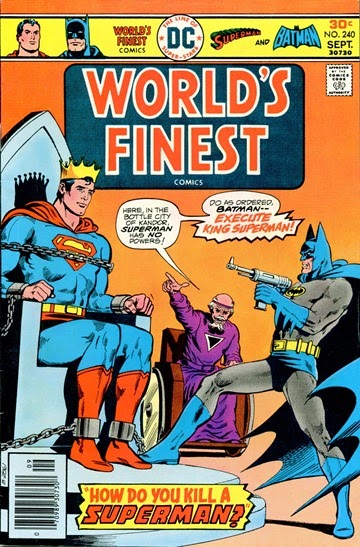 When director Zack Snyder appeared at last year’s Comic-Con and showed a thirty second clip from the upcoming “Batman v Superman: Dawn of Justice,” you could hear the fangasm from the other side of the country. At last, DC comic’s two greatest heroes were together on the big screen, and it looked like they were about to throw down. Of course, thirty seconds of film isn’t much, so moviegoers will just have to wait until 2016 to see who would win in a fight between the Dark Knight and the Man of Steel.

Comic readers, on the other hand, have already seen that scenario play out quite often. In fact, director Zack Snyder has been quoted as saying Frank Miller’s much lauded “The Dark Knight Returns,” in which a kryptonite armed Batman beats Superman to within an inch of his life, is a direct influence on “Batman v Superman: Dawn of Justice.” Given that, it seems likely the upcoming movie will be dark, gritty, and unrelentingly grim. That’s fine, I suppose, but the truth is sometimes I’d really like to see some of the kookier comics I read as a kid make their way to the big screen, comics like World’s Finest Comics #240. But… it ain’t ever gonna happen, not with stories like this one.

“How Do You Kill A Superman?” the title of the story asks, and as you might expect, Batman has an answer (because he’s BATMAN!). When an eight-footed space cat with a mutated brain takes control of Superman’s mind (yes, comics really did used to be THAT much fun) and forces him to menace the Earth, Batman receives an executive order from the President of the United States to find the Man of Tomorrow and execute him. I guess you don’t need a vote from Congress to declare war on Superman. 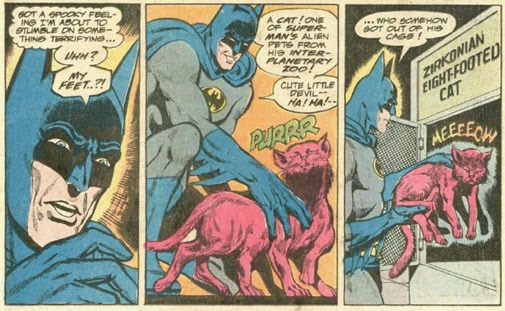 Tracking Superman to the shrunken bottle city of Kandor tucked away inside the Fortress of Solitude, Batman finds that the city’s artificial red sun not only robs his friend of his super powers, but unexpectedly also frees his mind from the control of the mutated eight-footed space cat (I could write sentences like that forever.) Though he has no memory of his heinous acts in the outside world, Superman agrees to remain in Kandor forever where they have declared him their sovereign (did I forget to mention on top of everything else that happens in this story, Superman is inexplicably crowned king of Kandor).

The mutated eight-footed space cat is having none of that, however, and teleports Superman out of Kandor so he can wreak more havoc on Earth. Realizing the situation is hopeless, Batman first tries to shoot Superman (no, really) the next time he returns to the bottle city, and when that fails, manages instead to jab him with a poisoned needle, killing King Kal-El instantly. That’s right, with a tear in his eye, Batman flat out ices his best friend. 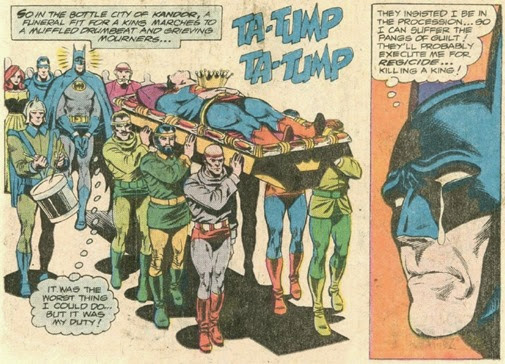 Fortunately, even as Batman prepares for his inevitable execution, the only mostly-dead Superman reverts to normal size and regains both his senses and his invulnerability (which is good news for him, but not so much for the small cramped bottle city he was inside). Just before the mutated eight-footed space cat (okay, I’ll stop) can make a meal of the miniature Batman, the fully recovered Superman swoops in and saves the day, basically by threatening to snap the creature’s neck. Even with the happy ending, though, it doesn’t change the fact that Batman (for real, in continuity, not an imaginary story) assassinated his best pal with nary a second thought because the government told him to.

World’s Finest Comics #240 was written by the late great Bob Haney, a man considered a mad genius by some and a complete menace by others. During his infamous run on World’s Finest, Haney was notorious for completely ignoring the current characterizations of his two leads as they were being written in other titles. That’s why you have Batman brandishing a gun and agreeing to kill someone at the behest of the powers that be, and you have Superman threatening to murder a sentient creature with his bare hands if it doesn’t behave itself. 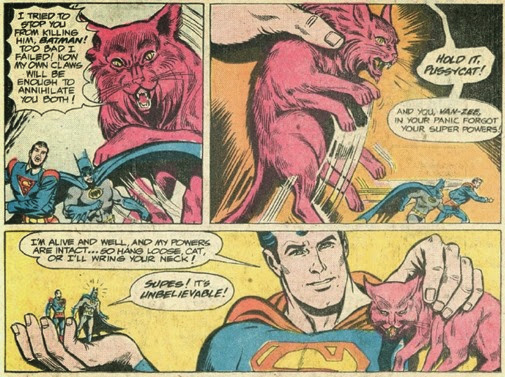 But that’s one of the interesting things about old stories like “How Do You Kill A Superman?” Besides the fact that they’re just plain fun, a lot of these old tales can sometimes challenge our ingrained notions about certain characters. When “Man of Steel” came out in 2013, a lot of digital ink was spilt over the fact that Superman killed General Zod in the film, mostly in the form of pronouncements that ol’ Supes would never do such a thing. And yet, if you read back through Kal’s comic history, you find that he’s offed a number of folks over the years, including Zod at one point. Batman’s record is even bloodier.

You know, sometimes it’s not a bad idea to have our nice little images of someone shaken up a bit. Take Jesus for example. Despite the never ending push to portray him as some sort of a laid back pacifistic hippy, the Bible actually shows Jesus getting extremely proactively pissed off quite a few times. In Mark 3 he is described as getting vocally angry over The Pharisees’ hard hearts, in Mark 11 he curses a fig tree after it disappoints him, and in Matthew 21 he looses his cool and violently puts a hurt on the moneychangers in the temple. So many people try to dismiss the idea of an angry God as an Old Testament construction, but the fact is, if you bother to actually read the Gospels, Jesus had no problem going off on people when it was proper to do so.

Of course, that “proper to do so” is the tricky part, isn’t it? The Catechism reminds us that by themselves, “strong feelings are not decisive for the morality or the holiness of persons; they are simply the inexhaustible reservoir of images and affections in which the moral life is expressed. Passions [of which anger is one] are morally good when they contribute to a good action, evil in the opposite case.” Jesus, it’s safe to say, knew when and how to properly express his anger. The rest of us, well, we have to be careful of things like anger without just cause (Matthew 5:22) or lingering animosity (Ephesians 4:6). Still, it’s not bad to be reminded every now and then that simply feeling anger, even acting on it, is not necessarily a sin.

Does that mean it’s okay to bodily threaten a captive mutated eight-footed space cat if it steps out of line? I’ll let you make that call.

Posted by EegahInc at Wednesday, February 11, 2015

Thanks. Since I abandoned the movie only conceit of the blog, I thought why not drag in my old comic collection as well. There's some fantastic lunacy in there to explore.

Yes, this is quite a nice addition. I wasn't allowed to touch comics as a kid, so I missed out on a lot of cool stuff.

Could you cite the CCC you quoted in support of anger in the cause of good, please? 'Cause I seriously need to tape it to my laptop.

Anger is named as one of the principal passions in CCC 1772. Passions and their use in the moral life is covered in CCC 1767 to 1770. I probably should start putting my references in these things.

Just a few weeks ago, I listened to an interview of Father Malachi Martin in which he pointed out that Jesus actually never turned the other cheek! When someone struck Him the face, He didn't offer the other side, but turned to the attacker and asked directly, "Why do you hit me?"

That shook me up nicely! =)

I don't think I've heard that before, that's an interesting interpretation. Jesus may not have been a movie-style macho guy, but he was no wimp.