DAWN OF THE DEAD VS. LEGION

As long time readers of this blog know, ever since I first saw the trailer for Legion all those years ago, I have taken to periodically pooping all over the movie whenever the opportunity arises. Safe to say, the passage of time has done nothing to diminish my dislike for the film. Unfortunately, I’ve been busy, and I haven’t really had the chance lately to give Legion a good bashing. Fortunately, Brett Graham Fawcett has.

Brett has a Masters in Theological Studies from Newman Theological College and is currently studying to become a teacher, which just goes to show once again that most (if not all) of my readers are way smarter than I am. So, when Brett forwarded me a piece he had written contrasting the failures of Legion with the successes of Zack Snyder’s Dawn of the Dead remake, I knew I had to share it with everyone. Enjoy.

Dawn of the Dead Vs. Legion

I ridiculed the movie Legion for generally sucking. One of the most important factors in its suckiness was its crappy metaphysic. It should, I think, have gone for a straight dystheistic world where God is omnipotent, omniscient, and scary. Instead, it was some sort of lay Process Theology or Hollywoodized Open Theism where God means well but has fits of immoderate anger and an occasional really bad idea that his smarter angels need to reel him back from. Besides being dimwitted theology, I don't think it makes for an interesting horror movie.

Furthermore, His means of eradicating the human race, even in the context of "popcorn logic", is not only really bizarre and perplexing but not especially menacing. Plugged In's review of Legion states, "The angels in Stewart's vision are only slightly more intimidating than your average film ninja." This, I think, does a disservice to the average film ninja, who has the good sense to pull his more outlandish feats in relative invisibility, thus respecting a cardinal rule of suspense thrillers and horror movies (one which Alfred Hitchcock used to great effect): It's scarier when you don't really understand it and have to leave it to your imagination.  Legion attempts to do your imagination's work for it, and, predictably, fails. 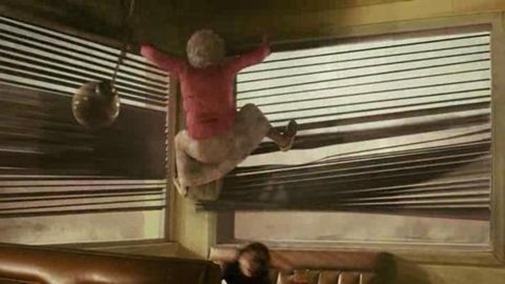 That said, if you want an interesting contemporary contrast to Legion which in many ways hits the notes it was going for, I recommend you check out Zack Snyder's remake of Dawn of the Dead. Now, obviously (this should really go without saying, but whatever, I may as well cover my bases), it's really violent and if you aren't into that stuff you probably won't enjoy this film (or be able to discuss movies with me for more than twenty-four seconds or so). Everyone else reading this has probably seen his movie adaptations of 300 and/or Watchmen, and I don't need to tell you that, whatever you thought of those movies, Snyder is a very stylish director who can really paint a fantastic cinematographic picture. This is important for an end-of-the-world picture like this one.

I'm gonna tell you why.

Both Legion and Dawn of the Dead take place largely in very familiar, pedestrian settings, the former being set in a diner in the middle of a desert and the latter for the most part unfolding in a boarded-up mall. In both cases the world is collapsing around them, and because communication has been severed they can only learn this information "in snippets", so to speak. This feeling of being isolated in an insulated little spot and yet still being aware of the Apocalypse is, I think, a really essential one for creating tension. Yet Legion, despite all the potential afforded by its setting, has few if any really majestic wide shots that express the scope of God's curse descending on the world.  Dawn of the Dead, on the other hand, has at least two really evocative shots to this effect in its first five minutes, one of which is a helicopter shot of a car driving down a suburban road while mayhem ensues around it. Despite, strictly speaking, only communicating information about a very small corner of the world, this is all our imagination needs to flesh the situation out and get a sense of the chaos enveloping the globe.

Two other movies that also, I think, succeed at conveying this sense that the sky is falling without showing it (in its entirety, at any rate, in the way that a movie like 2012 does) are Signs and I am Legend. I often hear both these films disparaged as being "overrated" or (and this one makes me want to yell at anyone who says it before setting them on fire) "not scary". Seriously, if you're going to castigate either Dawn of the Dead, Signs, or I am Legend for not being scary, then you've severely missed the point in every case. 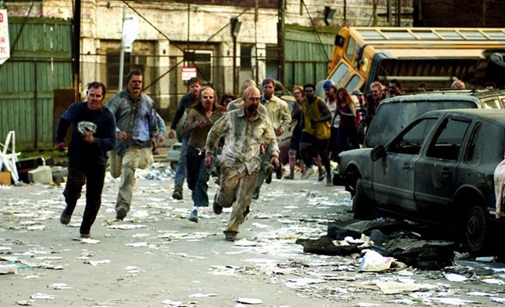 I think the problem is in the genres we use to categorize these movies, or maybe in the way they're advertised. No-one I know thinks of Signs as a science-fiction movie, even though it's about aliens (the complaint is always that the aliens aren't scary- which, considering the way the film ends, is a really stupid complaint, in my opinion), and because Dawn and Legend are about zombies, the presumption is that they're "horror" movies. I think this is really unfortunate. It would be like if someone expected Driving Miss Daisy to be an action movie and complained afterwards that the two leads weren't attractive enough. On the other hand, I have never heard There Will Be Blood described as a horror movie; it's always labeled as a historical drama, or maybe as a thriller. Yet I found There Will Be Blood way scarier than almost any "horror" movie in the last decade, since it is a portrayal of a man slowly but surely losing his soul. It is a movie about damnation far more frightening than any of these silly unintentional comedies involving creatures "from Hell". That said, don't see Dawn of the Dead expecting to be frightened. It's an action thriller that happens to be about something monstrous and creepy happening to the human race. On that level, it works marvelously.

There isn't much more to say about the film except to stress that it handles its subject matter with much more subtlety and cleverness than Legion does. The movie, for example, never explains why the dead are coming back to something approximating life and engaging in cannibalism, with their strength, speed, and agility apparently increased. Rather than have a character show up to just flat out explain everything and provide guidance, this leaves the characters to fend for themselves, which obviously is much more interesting. Nevertheless, there are a few clues scattered deliberately throughout the movie. The (extremely well-edited) opening credits depicting the unraveling of civilization are set to the last song Johnny Cash ever wrote, "When the Man Comes Around", a sober proclamation of the Second Coming of Christ that closes with his raspy recitation of Revelation 6:8a from the King James Bible: "And I looked, and behold a pale horse: and his name that sat on him was Death, and Hell followed with him." Later, while the characters prepare to escape from the mall, "The Hangman's Song" by Tyler Bates plays in the background. The song opens with these lyrics:

"Armageddon time is coming soon,
Fires will turn us all into dust,
And we will be judged one last time,
You, your son and me.
Woe, woe,
Woe is me..."

These clues in the soundtrack are not the only hints we get of what's going on; at one point, one of the characters watches a televangelist announce that this zombie apocalypse is, indeed, God's judgment on the human race. "Hell is overflowing, and Satan is sending his dead to us," he explains. "Why? Because you have sex out of wedlock, you kill unborn children, you have man on man relations- same sex marriage. How do you think your God will judge you? Well friends, now we know." The televangelist is played by Ken Foree, who appeared in the original Dawn of the Dead as Peter, a character who at one point mentions that his grandfather, a voodoo priest from Trinidad, used to warn him that "when there's no more room in Hell, the dead will walk the earth". Foree's televangelist repeats this chilling line. No archangels descend to confirm or deny this theory. The seed is planted in the imagination, and the rest of the movie waters it with gore. This, I submit, is much more effective.

Ken Foree's role in Dawn of the Dead- the solemn bald black guy with the wise remarks- is taken up in Snyder's remake by Ving Rhames, playing a police officer named Kenneth Hall. Kenneth (note the homage in the name) is a church-goer who crosses himself when he sees corpses and at one point admonishes the film's other bald black guy (this one a shadier character who apparently steals TVs), who "saw hell yesterday" and is now "scared of going to hell for all the bad things [he's] done" to "go in the stall, say 5 Hail Marys, wipe your ass, and you and God can call it even!" Harsh, perhaps, but not as bad as the gay church organist who is openly and unashamedly atheistic.

Obviously, this isn't a film with a lot of character development (instead it has a lot of nice little performances that give these bones the flesh of relative believability and even charm) and it certainly has no philosophical pretensions, but it isn't stupid, either, and these faint suggestions that, in fact, God may finally be putting an end to His rebellious image-bearers in this grotesque fashion is enough to chill the spine a couple of degrees, if the viewer is willing to invest himself intellectually enough to pay these suggestions any mind.

I close by citing IMDb: "The DVD box text implies that the cause of the zombie plague is a virus. But in an interview on FeoAmante.com screenwriter James Gunn denies the virus theory, stating that a zombie bite is like a vampire bite. Thus the plague is supernatural, not scientific." This, I suggest, is an admission of sorts from the mind behind this story that this pestilence of zombification is a curse from some higher power, and this small revelation colours the whole film with an epic, Old Testament dimension of significance that Legion, for all its hour and half of ostentatious bloviating, was unable to achieve.