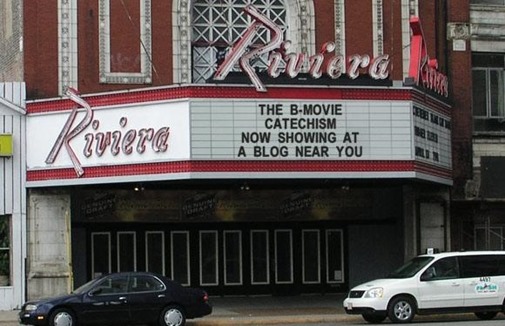 I was about to complain that I’m still knee deep in the work-year from Hell, but since I’m the one who spent all that time praying for a way to keep paying my bills, I don’t think I can honestly say the bad place is to blame for my crushing work load. Ah well, at least I’ve managed to find time to squeeze in a few reviews for Aleteia, including ones for Spider-Man: Homecoming and War for the Planet of the Apes. I also revamped one of my old articles about Horrifying Masks from the Movies for SCENES. Around here, though, pickings have been slim. Fortunately, there are some other sites out there talking about movies and religion to compensate for my lack of content.

To start with, there’s Bradford Walker’s article at SuperversiveSF in which he reflects fondly on The Last Starfighter. Sure, the movie may be a bit of old school 80s cheese chock full of video gamer wish fulfillment, but according to Mr. Walker, it’s also a praiseworthy tale about the necessity of accepting responsibility. Grig would be pleased.

I also somehow missed the 2015 insect horror flick, Bite, a low budget gore fest with overtones of Cronenberg’s The Fly. However, my curiosity is raised by Thomas M. Sipos’ post at The Hollywood Investigator in which he assures me (and everyone else) that Bite is a surprisingly conservative Christian allegory on the dangers of fornication. Guess I’ll have to keep an eye out for it.

Speaking of bugs, Philip Kosloski has a short piece up at Aleteia in which he ponders the role of spiders in Christian art and whether or not the hideous venom-filled things deserve their reputation as sinister creatures?

While you’re at Aleteia, you might also want to check out Matthew Becklo’s review of A Ghost Story, the new film in which Casey Affleck dies and comes back as a spirit who wanders around wearing a sheet with eyeholes in it. Apparently it’s thoughtful and touching and not at all as stupid as it sounds.

More somber sounding is John Macias’ musings on Logan at Crisis Magazine. Now that the film is out on home video, it might be a good time to take in his thoughts on the film and its themes of Technocracy and the Abolition of Man.

And finally, in honor of of the release of the aforementioned War for the Planet of the Apes, here’s a picture of some nuns feeding a monkey. Everybody likes monkeys. 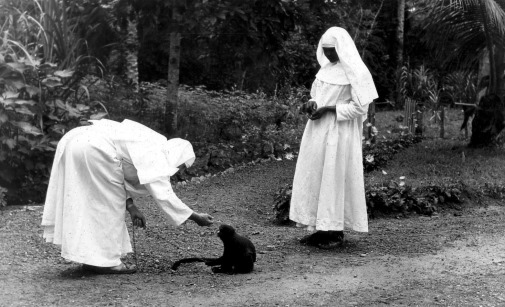 I admit that I loved The Last Starfighter even though I am neither a male nor in the right age group (I'm in my 60's now). Why? I have 6 children born between 1982 and 2004. Early on I thought that the video games the older ones played were a waste of time. We need to account to God for our time spent and I wanted them productive. I changed my mind once the oldest ones reached high school and it became obvious that in board games I couldn't touch them for ability in strategy. I have a masters degree in math and am no slouch myself, but I am still consistently beaten. They learned a LIT from their game playing. This led me to appreciate this movie on so many levels.

While I was working a part time job at Home Depot a few years back, I trained on the forklifts. The controls for the standing one was basically a joystick and a gamepad. Video game influence is everywhere now.

While I was working a part time job at Home Depot a few years back, I trained on the forklifts. The controls for the standing one was basically a joystick and a gamepad. Video game influence is everywhere now

Was it a Crown forklift? I ran those at Advance Auto Parts warehouse.

I believe it was a Crown, or at least a knock-off.