Long time readers know how Holy Horrors For Halloween works. Every year (almost) right before All Hallows Eve, I recommend a religious themed genre movie or two that doesn’t rely on exorcism and/or miserable priests on the verge of losing their faith to drive the story. Past entries in this series have included The Wicker Man, Bless The Child, The Believers, Brimstone & Treacle, This Night I’ll Possess Your Corpse, The Devil Rides Out and Jug Face. That’s a pretty good list, but there’s one problem with it. It’s a pretty good list; there’s no truly awful movie on it. Well, we’re going to fix that little oversight right this minute.  Ladies and gentlemen, I give you… Blood Freak. 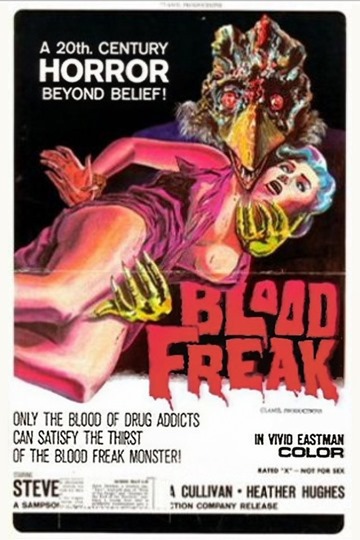 “A biker comes upon a girl with a flat tire and offers her a ride home. He winds up at a drug party with the girl's sister, then follows her to a turkey farm owned by her father, a mad scientist. The father turns the biker into a giant turkey monster who goes after drug dealers.” ~ The Movie DB

“This has been a story based partly on fact, and partly on probability. But the horrors that occur in the minds of those who allow the indiscriminate use of the human body as a mixing bowl of drugs and chemicals are as real as the real horror.”

“No trial has come to you but what is human. God is faithful and will not let you be tried beyond your strength; but with the trial he will also provide a way out, so that you may be able to bear it.” – 1 Corinthians 10:13-14 , NABRE

While we avoid politics like the plague here at the B-Movie Catechism, that doesn’t mean we’re unaware of what goes on outside our theater walls. That includes the current kerfuffle over the opioid crisis spreading throughout these United States. According to the National Institute on Drug Abuse, “every day, more than 90 Americans die after overdosing on opioids. The misuse of and addiction to opioids — including prescription pain relievers, heroin, and synthetic opioids such as fentanyl — is a serious national crisis that affects public health as well as social and economic welfare.” Things have gotten so bad that even puppies aren’t safe anymore.

With the situation now officially declared a national public health emergency, we will no doubt be hearing a lot more about the opioid crisis in the months to follow. You know, when it comes to raising public awareness about the dangers of drug abuse, filmmakers have always been quick to exploit join the cause. In her book Hooked: Drug War Films in Britain, Canada, and the United States, Susan C. Boyd writes…

“Drug prohibition emerged at the same time as the discovery of film, in the late nineteenth century and early twentieth century, and their histories intersect in significant ways… Cautionary and temperance stories about weak-willed people, drug-scare tales, and later addiction-as-disease narratives became familiar plot lines that movie viewers have come to recognize.” 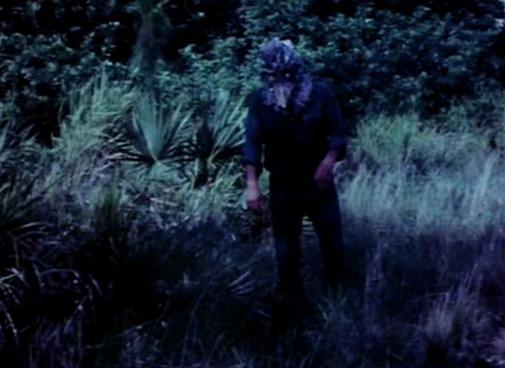 Hollywood’s anti-drug efforts have ranged from the sensational (1894’s Chinese Opium Den) to the infamous (1936’s Reefer Madness) to the “Please, God, I promise I’ll never do drugs, just don’t ever make me watch that again!” (2000’s Requiem for a Dream). Out of all of them, though, no other anti-drug film has scaled the peaks of insanity as high as Blood Freak, the movie Something Weird Video gleefully advertises as "The World's Only Turkey-Monster-Anti-Drug-Pro-Jesus-Gore Film!"

Where to start? With the directors, I suppose, because that’s where the movie does. Brad F. Grinter was an active nudist, occasional actor, and not-so prolific director of Z-grade movies. Based on the evidence, nudity was probably his strongest talent out of the three. Along with his dubious directorial and scripting efforts on Blood Freak, Grinter plays the mustachioed narrator who introduces the film while sitting at a desk wearing a velour shirt and taking long drags on a cigarette. Think of him as kind of a cross between Plan 9’s Criswell and a background extra from Boogie Nights. 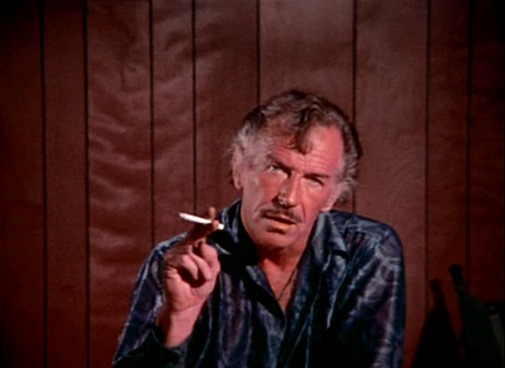 After rambling on a while about how change is the only constant, the narrator introduces us to burly biker Herschel, played by Grinter’s co-director and co-screenwriter, Steve Hawkes. Upon arriving from Europe, Hawkes first pursued his dream of becoming the next Johnny Weissmuller by playing a Tarzan knockoff in a series of Spanish language films. It was supposedly during the last of those productions that Hawkes received burns over 90% of his body. Deciding to channel some of that experience into a screenplay, he connected with Grinter and the rest is history. Well, somebody’s idea of history anyway.

We see Herschel stop to help stranded motorist Angel who, true to her name, offers to take the homeless Vietnam veteran to her father’s turkey farm where he can have a meal and maybe get some work. On the way, the extremely religious Angel explains to Herschel that she never uses drugs because it would defile the temple that is her body. She also points out that adultery is sticks and stones. No, I’m not sure what that means either.

Arriving at the farm, Herschel is introduced to some of the farmhands, who offer him a job, and to Angel’s much less religious sister Ann, who offers him herself. Herschel fends off the determined girl for a day or two, but after being browbeaten into taking a puff from a drug-laced joint, he gives in to Ann’s oft-sampled charms. Don’t look too unkindly on Herschel, though. The narrator assures us it would take much LESS of a man than Herschel to resist a woman like Ann. No, I’m not sure what that means either. 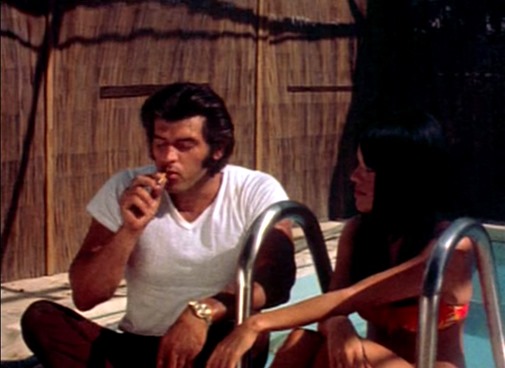 Herschel also gives in to the suspect scientists employed by the farm and agrees to act as a guinea pig for their chemically enhanced turkey meat. Unfortunately, Herschel has informed no one that he has secretly been taking illegally obtained prescription medications to help deal with burns he received during the war. These opioids, when mixed with Ann’s drugs and the altered poultry, have a horrendous effect on Herschel’s physiology. After blackingout, our hero awakens to discover he now has the head of a giant turkey and an insatiable thirst for the blood of drug addicts.

Much of the rest of the movie is spent watching the turkey-fied Herschel stumble through dimly lit night scenes, gobbling at the moon until he happens upon some hapless redneck druggies and drains them dry. He also takes time to gruesomely avenge Ann’s near-rape after a friend trades her to a pusher for some drugs. Fed up with all the bloodshed, some of the other farm workers track Herschel down and serve him up for Thanksgiving dinner. 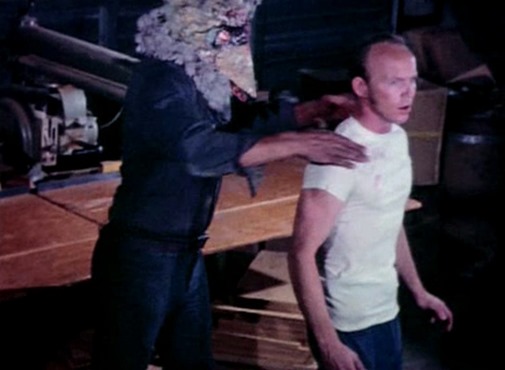 At which point Herschel awakens for real. It seems the whole turkey-head thing has been a hallucination caused by the dreadful drug cocktail circulating in his system. Shocked to his senses, Herschel calls on Angel to help him pray for the strength to overcome his addictions. His story ends with he and Ann heading off to the beach together to start a drug-free happily ever after. As for the narrator, he appears one final time to explain how Herschel’s story has been a warning against abusing one’s body with chemicals. He then succumbs to a coughing fit because he’s smoked at least two packs over the course of the film. The end.

It sounds like parody, but everything onscreen oozes sincerity. You see, by 1972, the year of Blood Freak’s release, the loose conglomeration of evangelical hippies and charismatic Christians known as the Jesus movement was at its peak. Jesus people were making feel good versions of the Son of God hits on both Broadway and the pop charts. It was only natural that those with access to film equipment would get around to making their own low budget exploitation films with an honest to goodness religious component. As for the drug angle, while not everyone in the Jesus movement was quick to forego their use, many did. Given Hawkes’ real life experiences, which were slightly altered and given to Herschel as a backstory, it’s not too hard to imagine he was all-in with the film’s anti-drug stance. Everything points to Blood Freak being an honest attempt by religious minded filmmakers to get people to just say no. 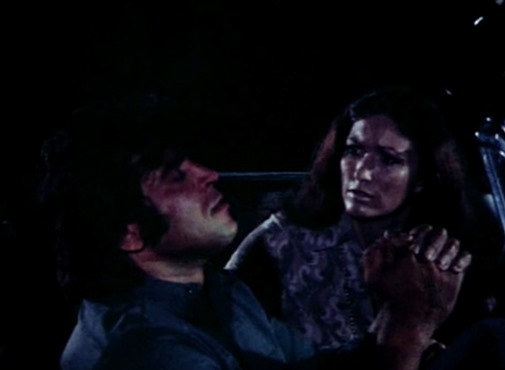 And why shouldn’t it be? As the Catechism notes, “The use of drugs inflicts very grave damage on human health and life. Their use, except on strictly therapeutic grounds, is a grave offense.” The statistics stated at this start of this article prove the Church right on this. As such, it’s only common sense to oppose drug use. As for those already hooked using prayer as part of their efforts to kick the habit, that turns out to be a good idea as well.

“There have been several studies showing the effectiveness of faith-based recovery. Teen Challenge, a Christian drug treatment program, has been proven in two separate studies to be more effective than its secular counterparts. A study of injection drug users had one-third of them credit religious practices in avoiding both use and risky practices that could lead to infection. Another study found people who attended faith-based programs were more optimistic about their chance for success. Interestingly, faith-based programs can sometimes also be more effective even when the patients are non-religious (but not anti-religion).”

So, yeah, it actually seems like Blood Freak was on to something. Drugs actually are bad for you and religion really can help you stop using them. As for the whole using drugs giving you a giant turkey head thing, though, I’m afraid I’ve got no facts to back that one up.

Great review! You do make us think.