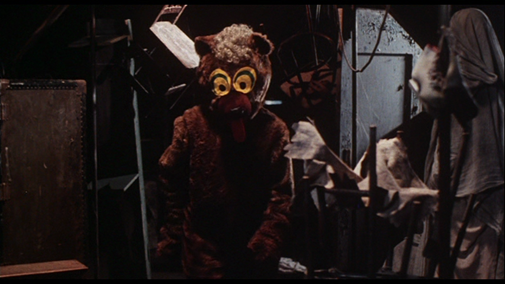 I know what you’re thinking. What could this picture of the murderous mascot from the 1984 slasher film Girls Nite Out possibly have to do with the 2013 March For Life in Atlanta yesterday? sTICK WITH ME, It’ll become obvious in a minute.

First off though, thanks to everybody who offered their prayers of support for the march, it was much appreciated. As usual it was pretty much standing room only for the pre-march rosary and mass at the Shrine of the Immaculate Conception. I can tell I’m getting older because kneeling on those wooden floors in the back is hurting just a tad bit more each year. Still, a few sore knees are worth it to see the building overflowing with people enthusiastic for the cause. But better yet, while I couldn’t find any official numbers, I’m pretty sure the crowd at the march itself topped last year’s by at least a thousand. Whether that means we’re slowly winning the argument or just that more folks are willing to show up when it’s not pouring down rain I don’t know, but the increased attendance was gratifying no matter the reason.

However, also in attendance were about six or seven  (seriously, a whole whopping six or seven) counter-protesters, including what has become an almost ubiquitous sight at any event involving abortion… two women dressed in vagina costumes. I gotta tell you, there’s nothing like walking out of a 140 year old Catholic shrine after mass with the Archbishop and making your way down a few blocks to where a frazzled looking woman dressed in a saggy vagina outfit stands on a street corner and screeches into your face that she is not an incubator.

In all honesty, my first quick thought was that I kind of missed coming to downtown Atlanta every day to go to college like I used to back in the day, because you just don’t get this kind of quality crazy in the suburbs.

But my second thought was… I just felt bad for these women. Not a shred of anger at all, just pity. Look, I know I made terrible decisions in my youth, some directly related to my presence on that corner yesterday, but what series of life choices do you have to make that results in your winding up on a public street in your middle age, dressed up like a mascot for Team Lady Parts, cheering on the destruction of human life? As much as I wanted to work up a little indignation and find evil in their faces, all I could really see was someone so lost that it just made me incredibly sad. So, despite the fact that they think I’m Hitler and it’s the last thing they’d ever want me to do for them, these ladies are now in my prayers. Outside of maybe offering some fashion advice, I just don’t know what else to do for them.

I think you just nailed the two places sin can take us here on earth. It'll either drive you to repentance and reparation, or it'll cause you to become a human windmill, wildly swinging your arms about, trying to drag down everyone near you.*

Those costumes...I've decided the folks in costume aren't actually feminists in any historical sense, but a bizarre subspecies of animal rights activists. I'm glad somneone's praying for them.

Those costumes...I've decided the folks in costume aren't actually feminists in any historical sense

I delight in the fact that I've never seen these costumes. My children say that their fondest memories of Life Chain and March For Life was when they were little and there was a literal WALL of rain coming straight at them and we let then get soaked in their church clothes. Ah the joys of youth. I admit it was fun for us. We felt that Satan was trying to dissuade us from demonstrating and WE WON!

One of the ladies in my group could barely be constrained from going over and "trying to talk some sense" into the protesters, but she eventually gave up on the idea. There's just something about the costumes that says "I'm beyond all rational arguments right now." I don't know, maybe that's endemic of the whole feminist movement now. If so, then McGrew could be right.

As for the weather, as much as I grumble about last year's rain, there was something nice about seeing everybody unwaveringly trudge through the downpour while the Occupy Atlanta crowd huddled nearby in their tents.

There's just something about the costumes that says "I'm beyond all rational arguments right now.

There is a very good entry by Msgr. Pope about how we should appeal to the conscience: http://blog.adw.org/2013/01/joy-and-sorrow-a-few-reflections-after-the-march-for-life/

I compared it to the giant boulder with gold in its center in Pale Rider. You gotta keep banging it with the sledge hammer.

Nice to know I'm in good company with my reaction. It's even nicer to know Msgr. Pope was there marching.

I can't understand, how your are getting older because kneeling on those Wood floors in the back, what's the logic behind it it is very difficult for me to understand. Can you elaborate it in more detail, so I can get off this confusion.

Ah, my apologies for the confusion, Lorenzo. My knees are getting bad as I grow older, so kneeling on hard surfaces like wood or marble is getting more difficult each year. It is not the floors themselves causing the problem, just age. So, by all means, everyone feel free to purchase wood flooring with no fear of it causing you to age prematurely :)