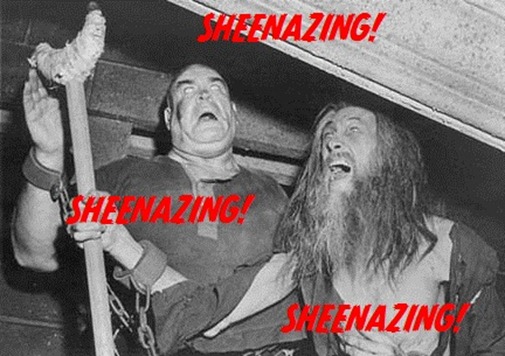 Apparently when Tor and his pal first heard the word SHEENAZING, they thought if they yelled it loud enough they’d turn into Captain Marvel. But as it turns out, Sheenazing is the name of the blogger awards being handed out by Bonnie over at A Knotted Life in honor of the Venerable Fulton J. Sheen, a fellow she rightfully concludes was “amazing at using the newest forms of media to communicate the beauty of the Catholic Church and his love of Christ to the world.”

In what will surely be written off as a moment of madness, the B-Movie Catechism has been nominated in the categories of Best Underappreciated Blog, Best Blog by a Catholic Man, and (no, really) Smartest Blog. So if you’re feeling slightly mad yourself (Norman Bates claimed we all go a little mad sometimes), why not drop by A Knotted Life for the Sheenazing Blogger Awards and cast a vote for one of your favorites. Although let’s be honest, we all know it’ll probably be for the Bad Catholic, because really, who stands a chance against that kid in a blogging contest.

You should have been nominated for "Best Use of Memes", too.

I'm busy campaigning for you. When you win, all I ask is that you find some way to work "Back to the Beach" into a Catechism lesson.

Campaigning for the quality of this blog sounds like a sure way to garner sideways glances of suspicion from your friends, but who am I to discourage you. And I'm sure I can work in Frankie & Annette no matter the outcome.

Cari, you seem to have received 5 nominations!