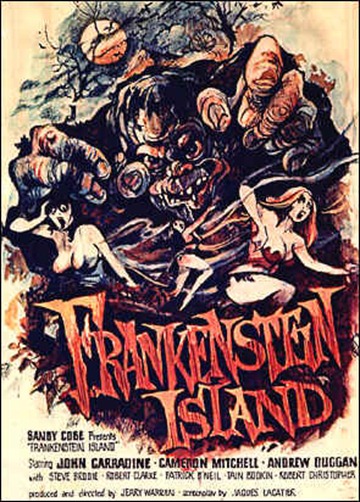 “This uproariously bad film marks the less-than-glorious return of producer/director Jerry Warren, shameless purveyor of such cinematic abominations as Teenage Zombies, of which this is a remake of sorts. The crazy-quilt story line defies all rational explanation, but essentially begins with a wayward hot-air balloon crew - including Warren alumnus Robert Clarke and a dog named Melvin - becoming stranded on an island overrun by nubile jungle girls in Frederick's of Hollywood leopard-skin thongs. What sounds like an ideal vacation is disrupted by a bunch of zombies in Ray-Bans, the monster-making practices of a bleach-blonde mad scientist named Sheila, and the superimposed face of John Carradine (lifted from another film) mumbling "The Power! The Power! The Power!" Also on hand is a gibbering, drooling Steve Brodie as a howling mad pirate, and Cameron Mitchell as an equally deranged sea captain. It's very likely Warren himself had no idea what his own film was about, so viewers shouldn't waste valuable time trying to make sense of it.” – rovi’s AllMovie Guide

So what exactly is it that makes Frankenstein Island so excruciatingly painful to watch, even for the most inveterate bad movie aficionado? Is it the direction (or lack thereof) by Jerry Warren, the same auteur who brought the world the likes of Face of the Screaming Werewolf, Attack of the Mayan Mummy, and The Wild World of Batwoman? Is it the unavoidable fact that the movie was released in 1981, but looks like it was filmed sometime in the late sixties on a budget leftover from the fifties? Or is it the impression that the actors appear to have spent a lot of time rehearsing… some other movie besides the one they’re in, because they sure as heck don’t know their lines in this one?

No, while all that certainly adds to the misery, what really brings the pain to Frankenstein Island is the script. Or perhaps scripts would be a better description. The whole movie is so disjointed that it seems like Warren took five or six unfinished film treatments he had lying around, tossed them all into the air, and then picked up random pages and filmed them, oblivious as to whether any one scene connected to another. The most glaring example of this is the sheer number of seemingly unrelated characters who periodically wander in and out of the film, doing things that have no relationship to anything else going on. Over the course of the first 60 minutes of the movie, the viewer is introduced to the following:

None of it makes a lick of sense, but undaunted, Jerry Warren has every single character in the movie (except for the insane one-eyed pirate who dies one scene earlier) show up to participate in the climatic showdown, as if that will somehow bring everything together into some semblance of coherency. You have to see it to believe it…

Pretty sad, huh? It’s like they scheduled a WWE battle royal, but forgot to work out any of the plot points beforehand, so everybody just wanders around trying to figure out what’s going on. But hey, that’s the way life is sometimes, isn’t it? Heck, if you read the Bible, it seems like even the apostles spent half their time just asking questions and trying to make sense out of all the things they saw and heard during their brief time together, and that’s despite the fact that they had Jesus himself there to explain things to them.

But finally, near the end of the second year of Jesus’ public ministry, things finally started to become a bit clearer for the apostles, beginning with the event we commemorate in this Sunday’s reading, the transfiguration. As I’m sure you remember, this is where Jesus took Peter, James and John up on a high mountain where His body took on a dazzling brightness, He is visited by Moses and Elijah, and the voice of God calls Him son and tells the apostles to listen to Him. We’ve already discussed the theological significance of the transfiguration, how it brought to the forefront the concept of the holy trinity, but there are also more personal reasons the event was important for the apostles, and for us as well if we allow it to be.

Pope St. Leo the Great points out that “the great reason for this transfiguration was to remove the scandal of the cross from the hearts of his disciples, and to prevent the humiliation of his voluntary suffering from disturbing the faith of those who had witnessed the surpassing glory that lay concealed. With no less forethought he was also providing a firm foundation for the hope of holy Church. The whole body of Christ was to understand the kind of transformation that it would receive as his gift. The members of that body were to look forward to a share in that glory which first blazed out in Christ their head… In the preaching of the holy Gospel all should receive a strengthening of their faith. No one should be ashamed of the cross of Christ, through which the world has been redeemed. No one should fear to suffer for the sake of justice; no one should lose confidence in the reward that has been promised. The way to rest is through toil, the way to life is through death. Christ has taken on himself the whole weakness of our lowly human nature. If then we are steadfast in our faith in him and in our love for him, we win the victory that he has won, we receive what he has promised.”

So if Pope St. Leo the Great was correct (and considering he’s known as “The Great” the odds are pretty good that he was), then the transfiguration becomes our first sign that all the crap we put up with for our faith, all the insults and prejudices and (in some places) persecutions, will make sense in the end, that they will all be worth it. Probably not a bad thing to remember as the news coverage surrounding the election of a new pope amps up over these next few weeks.