SHORT TAKE: BIRDS OF PREY (AND THE FANTABULOUS EMANCIPATION OF ONE HARLEY QUINN) 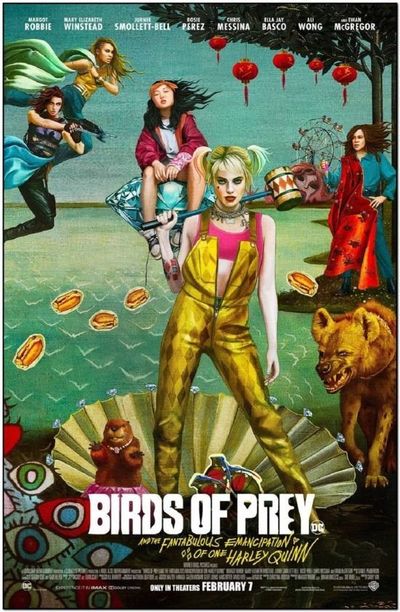 What a relief! Like most people who had the misfortune to run across the advance trailers for Birds of Prey (and the Fantabulous Emancipation of One Harley Quinn), we here at the B-Movie Catechism were left with the indelible impression that the film was going to be, at best, an unbearable, unwatchable mess. An honest pre-assessment, especially considering this was to be a spin-off of DC's Suicide Squad, itself an unbearable, unwatchable mess. Thankfully, that's not the case.

Oh, the movie does have problems. It slogs along a bit too much until all of the characters are in place, only picking up once everyone begins to interact. As for the characters themselves, comic fans will be disappointed in some of the ways they've been translated to the screen. Cassandra Cain in particular is so altered they may as well have just named her Generic Street Urchin as the once-Batgirl of the comics is nowhere to be seen.

Still, the results end up being an enjoyable watch. Margot Robbie is so obviously in love with playing Harley Quinn that she makes you love her as well, sometimes by sheer force of will as Harley's actions aren't always all that lovable. Ewan McGregor's foppish take on the villainous Black Mask alternates between hilarious and just plain weird. It's almost as if he studied old Gary Oldman footage to find his muse. Everyone else does what they're supposed to.

As for whether the look of the film appeals to viewers, that will come down to individual taste. The design is basically what you would get if you took Todd Phillips' Joker and redecorated it for a gay pride parade, sort of grimy and glitzy at the same time. It's fine, and goes to show that DC is willing to take chances that Disney/Marvel isn't quite ready to do yet.

Not much has been said about the plot to this point because it just doesn't matter. There's a shiny MacGuffin that everyone in Gotham wants, leading to some well choreographed action sequences. Most of the time in between kicks and punches is spent with Harley trying to come to grips with the end of her toxic relationship with Jared Leto's Joker (who mercifully makes no appearance).

Now, since this is Harley Quinn we're talking about, her coping mechanisms typically involve blowing stuff up and/or crippling thugs with a baseball bat. Safe to say, Harley has serious anger issues as the film begins. Which is fine, because so did St. Therese of Lisieux at one point. Her mother once commented of Therese in her pre-Saint days that “She flings herself into the most dreadful rages when things don’t go as she wants them. She rolls on the ground as if she’s given up hope of anything being right again. Sometimes she’s so overcome that she chokes.”

Obviously, Therese got better at handling things. By the time she was faced with unjust persecution from a misunderstanding Mother Superior, Therese had learned to direct all her actions toward honoring God and not worry so much what others thought of her. Needless to say, Harley doesn't grow quite that much in the movie because (1) she's insane, and (2) that would pretty much kill any chance of a sequel. Let's face it, not many people are going to pay to see Birds of Prey (and the Quiet Calm Meditations of One Harley Quinn). Still, the character does grow, and that's something.

All in all, faults notwithstanding, DC seems to once again have produced a movie that isn't terrible, despite the trailer making it seem it would turn out otherwise. Whoever put that together needs a visit from Harley and her bat.

P.S. Honesty demands we admit that much of the same subject matter in this movie regarding Harley's breakup with the Joker is being handled much, much better in the animated Harley Quinn show currently running on DC Universe. If you must choose between the two...
Posted by EegahInc at Friday, February 07, 2020