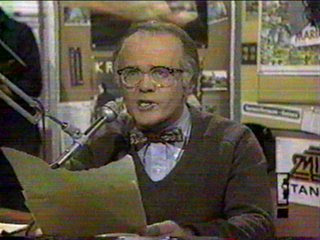 Good evening Mr. & Mrs. Catholic and all you other Christians at sea. Listen to them, the children of the night, what music they make. No really, listen. Things are still a little off-key out there in celebrity land, but that's okay, because today's gossip is tomorrow's Bible study. Now off to press.

Variety music reviewer Phil Gallo is quite impressed with Joni Mitchell's latest release Shine. He especially likes the title track in which he believes "like so much of Mitchell's great work, there's a sense of hope that's there for anyone who choses to listen closely." So we listened closely. "Shine on Reverend Pearson, Who threw away, The vain old God, kept Dickens and Rembrandt and Beethoven, And fresh plowed sod" she sings. The Reverend Pearson reference we can decipher. He's the fine fellow who recently got the boot from Oral Roberts University and lost thousands of members of his congregation when he started preaching there was no hell. Fair enough. As our last review noted, that idea doesn't gel with Catholic doctrine, but there's no real shock in hearing it expressed by an aging folk-jazz hippie chick who's selling her CDs on the Starbucks label these days. However, following up in the next verse, Joni continues with "Shine on the red light runners, Busy talking on their cell phones, Shine on the Catholic Church, And the prisons that it owns". Huh? What the heck does that mean? "When I recorded it" states Ms. Mitchell on her website, "I was sick so a doctor prescribed some penicillin, which I had an allergic reaction to. I was delirious, stressed out, and we worked all night long." Similar things happen to us here also, Joni. We've found it useful to get some sleep and rewrite in the morning. It seems to help cut down on nonsensical ramblings. Oh well, I suppose it's like Bishop Fulton J. Sheen always said "There are not over a hundred people in the United States who hate the Catholic Church. There are millions, however, who hate what they wrongly believe to be the Catholic Church—which is, of course, quite a different thing."

Which brings up the latest Kid Rock interview with Entertainment Weekly in which he discusses his upcoming release Rock and Roll Jesus. Let's let the poet speak for himself shall we. (Bleeped for content of course.) "When we say ''G****** it, I'm scared to send my children to church,'' that's so f*****' relevant. And everyone thinks it, but no one's said it. I mean, all you hear about is priests molesting kids, and all this weirdo f*****' crazy right-wing Bible-thumping s***. It's like, I want to believe in Jesus, I do believe in Jesus. I am a f*****' good person. But I'm scared to send my kid to your f*****' organized religious crazy f*****' bulls***. And I don't know if anybody's said that. I haven't heard 'em. I might hear some left-wing f*****' hippie that wants to f*****' legalize drugs say it, but not anybody who's right down the middle saying ''Look, this is what people are kind of thinking in the back of their heads.'' And to put it in a way that really touches people right in their souls, and kind of takes 'em to church with rock & roll, it's pretty powerful to me." Wow. We're touched. Aren't you touched? With that kind of eloquence we can hardly wait to hear the moving lyrics to Track 10: Blue Jeans And A Rosary.

And in our final music related news we are reminded how the Catechism points out that "the Lord grieves over the rich, because they find their consolation in the abundance of goods." Rejoice then for the music industry as IMDB reports that record companies are drastically cutting their previously abundant budgets for music videos. (They blame Youtube for the dwindling interest of viewers, we merely point to our previous two news items.) When asked about the likely end of videos costing in excess of $1,000,000, director Samuel Bayer remarked, "A comet hit the earth and the dinosaurs are dying. There's a new age coming. I think those days are over with." Obviously, we at the B-Movie Catechism shed no tears over low budgets. Perhaps the lack of funds will force video makers to be more creative or possibly even (gasp) require the actual quality of the songs themselves to carry the burden of selling CDs.

For the time being, we here will simply shut off our radios and content ourselves with the dulcet tones of nature to be found in our upcoming review. Until then, we echo the words of the great Les Nessman (that's our boy up at the top of this entry by the way), good evening and may the good news be yours.

Posted by EegahInc at Wednesday, September 26, 2007