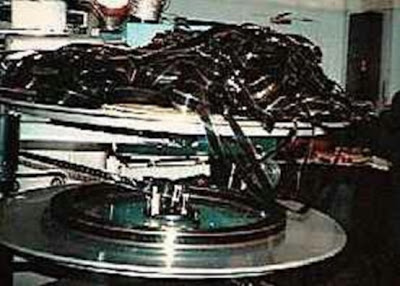 A brain wrap, for those of you who never spent any time lurking in the dark labyrinthine corridors running above the concession stands and Tivoli lined auditoriums, is slang used by projectionists to describe a situation in which the film exiting the vertical feed platter via the payout unit (the brain) tangles up into a hopeless mass of celluloid. It's nigh impossible to repair quickly and sometimes even results in the cancellation of the show. In short, it's all screwed up!

Thanks to a nasty flu virus, a truncated work week and the standard holiday demands, the B-Movie Catechism is experiencing a major league brain wrap. We're not canceling the show (NO REFUNDS!) but we will be delayed for a few days as we splice everything back together into working order. Until then, you might want to check out some of the following movie related links.

Allen from It Came From Allen's Brain offers up his own review of this week's feature, Santa Claus Conquers The Martians. He pretty much covers just about every conceivable spiritual implication in the film, so who knows what I'll be able to come up with.

Rather than wait for the inevitable Hollywood re-imagining, The Sci-Fi Catholic's D. G. D. Davidson offers up the first part of his screenplay: Santa Claus Conquers The Martians: The Remake! With dialog like "Son of a $!#$%!! Santa, he's got a missile lock!" how can you go wrong?

Mark LaBelle over at Arrival: The Parousian Weblog asks the burning question What do the Teenage Mutant Ninja Turtles have to do with the Church? Come on, you know you want to know the answer.

And finally, writing for Christian Halloween Fan, Lint Hatcher & Rob Bennett take a long look at monster fan symbology and How Monsters Reveal What Matters Most. (The website doesn't allow individual page links, but the article isn't hard to find.)

That should hold everyone over until I get this mess straightened out. And don't worry, kids, Santa Claus will still get here by Christmas and he'll still conquer the Martians. I guarantee it.
Posted by EegahInc at Thursday, December 20, 2007

I just had a flashback to Three Men & a Baby. My very first night as a projectionist. Then, there's the time I tried to carry Born on the Fourth of July ( a three hour plus film) from one projector to another...alone. And...promptly dropped it....unspooling it from the center. Good times.

The Horror! THE HORROR!!

Little known fact...I still have semi-nightmares about brain wraps as a projectionist & dead air as a disc jockey.

Did you notice we never brain wrapped or destroyed anything like Jaws: The Revenge or Three For The Road? (Forgot about Three For The Road didn't you?) No, it had to be whatever was the top draw for the week. Had to be!

I still have dreams of forgetting to start movies on time.

The three people that paid to see it had no idea.

Thanks for the linkage!
Who knows? It might inspire a third reader to my blog!

"Brain Wrap": I'll have to remember that. There's bound to be a b-movie plot in there somewhere... atomically-accelerated evolution creating some avant-garde film out of the brain wrap as frames melt into one another, and everyone who watches it has their mind stolen and replaced by a brain from planet Zolnar. The end result are hordes of people who want to watch neverending reruns of Gigli.

When I went to I am Legend they showed a trailer explaining the theater's new digital projector system and it's virtues (no scratches and fading, etc), but it made me kinda sad as I had fond memories of those giant platters and the weird projectionist guy in charge of splicing it together. However, no more brain wraps I guess.

Btw, Eegah, Have you explored the conversion/transformation imagery with the character of Torg the robot? I didn't mine that gem a bit. Nor did I compare Voldar to King Herod. Additionally, there's the idea of fighting with unusual/nontraditional weapons, since the weapons of our warfare are not those of this world.

That sounds great, but I still have faith in my fellow man to find a way to fowl up the works. I find a way to make digital stuff skip and stall at my house, I'll lay odds that minimum wage high school kids can do it at the theaters.

Ain't it hilarious how something that makes everyone's worst ever list is so rich in material for discussion? Not that I'm complaining, it keeps me in the blogging business after all.

But, I'm sure I'll recover.

BLOGS THAT MAKE MORE SENSE THAN MINE