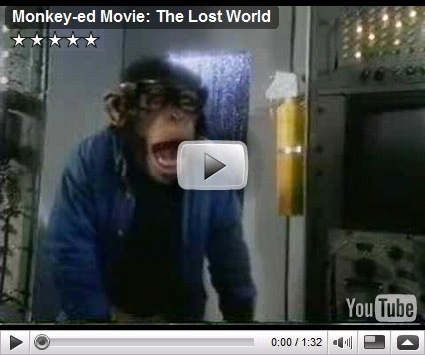 You want to know how things work around here? My job slows down just enough to let me devote some time to writing the review of Warrior of the Lost World, but I get distracted because the title reminds me of Sir Arthur Conan Doyle's The Lost World, which naturally calls to mind Spielberg’s The Lost World, which leads me to… oh, never mind my free association nightmare, just enjoy the short. (Everybody likes monkeys!) You know, despite my preference for low budget fare, I actually enjoy the Jurassic Park films (mostly for the pure pleasure of seeing dinosaurs tear stuff up; hey, the monkeys should have been a clue you ain’t on a fine arts blog). But as the above short highlights, the treatment of Jeff Goldblum’s character in the Lost World is kind of annoying. Without Michael Crichton’s input on the script, the second movie seems to find his Chaos Theory shtick (complex systems, for the most part, cannot be controlled) too difficult to explain and just replaces the whole thing with Murphy’s Law (anything that can go wrong will go wrong). That’s not scientific theorizing, that’s just plain old fashioned pessimism.

Still, I suppose I should sympathize with the character of Ian just a little. What with our constant harping on the state of things today, we Christians are always getting tagged as pessimists ourselves. Even Pope Benedict XVI was labeled as such when in 1995 he suggested that “perhaps the time has come to say farewell to the idea of traditionally Catholic cultures. Maybe we are facing a new and different kind of epoch in the Church’s history, where Christianity will again be characterized more by the mustard seed, where it will exist in small seemingly insignificant groups that nonetheless live an intensive struggle against evil and bring the good into the world — that let God in.” As you can imagine, that kind of talk didn’t go over too well with the “name it and claim it” crowd. As the Pope related in God & The World, “When I said that, I was reproached from all sides for pessimism. And nowadays nothing seems less tolerated than what people call pessimism - and which is often in fact just realism.”

But even if you don’t buy that reasoning, and still think the Pontiff is being a little pessimistic, that’s actually okay because, believe it or not, Christians aren’t always expected to play the optimist. Christians are expected to strive to be something much more significant; they’re expected to be hopeful. As Peter Kreeft points out, “Hope is not the same as optimism; some of the great hopers are pessimists by temperament, like Evelyn Waugh. Hope's opposite is despair, which is a deadly sin, not pessimism, which is a psychological trait.” (If you’re dying for a lengthy explanation on what the good doctor means by that, you might enjoy The 1913 Catholic Encyclopedia’s article on Pessimism.) In fact, Kreeft goes so far as to dismiss simple optimism as Hope devoid of Faith, as mere wishful thinking (Rain rain go away, come again some other day, as Barney the Dinosaur might sing), or worse, as “the power of positive thinking”. (I think he’s talking to you, Oprah.)

So, for those of you Christians out there whose temperament is so inclined as to expect in certain cases that anything that can go wrong will go wrong; you go right ahead. Just don’t forget, as the Catechism reminds us, that “in every circumstance, each one of us should hope, with the grace of God, to persevere "to the end" and to obtain the joy of heaven, as God's eternal reward for the good works accomplished with the grace of Christ.” That’s not optimism, that’s just plain old fashioned Faith.

(Oh, and look. Just as I’m finishing this, here comes another email from work that’s bound to take hours to deal with. I was kind of expecting something crappy like that to happen.)

Thank you for the words and the link.

As always, the good stuff I just copied from people smarter than me :)

Bravo - one of these days I'd like see an original movie done by monkeys, and then remade using humans.

I want to see a monkey remake of Pollyanna. But because she's a monkey she doesn't fall from the tree. That would be sweet.

I think an important point here is: Why is it that two talking monkey's being attacked by Barney's green brother is totally entertaining?

"...an original movie done by monkeys, and then remade using humans."

Now THAT'S a straight line if ever I've heard one! Made by monkeys and should be remade by humans? Well, I haven't seen Angels & Demons yet, but...

"...But because she's a monkey she doesn't fall from the tree."

I was about to say how it's just not possible to have a sad ending with monkeys, but then I remembered King Kong & Mighty Joe Young and had to stop.

"Why is it that two talking monkey's being attacked by Barney's green brother is totally entertaining?"

All of TBS' Monkey-ed Movies are on You Tube. I'm partial to the Alien one.