The bad news is that a lightning storm not only knocked out our power for a night, but also fried the satellite dish, one TV, two receivers, and half the cable in the house, so I had to spend ten hours the next day with the repair technicians. In other words, there was no time for a movie of the week. The good news is that as a consolation prize, you get a clip from one of my all-time favorite childhood shows, Ultraman! 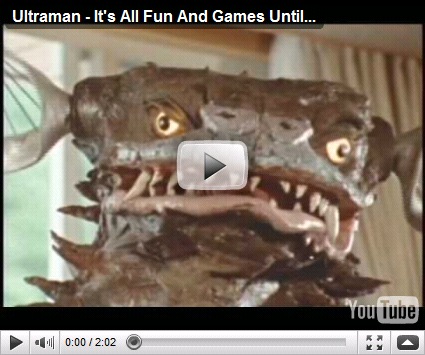 Yep, it’s all fun and games until someone conjures up a giant hellbeast from outer space and possibly loses an eye. Not to mention an entire luxury hotel. It just goes to show that the old saying is right… sin makes you stupid.

As St. Cyprian explained in his 63rd Epistle, “the profound gloom of the falling darkness has so blinded the hearts of some, that they receive no light from the wholesome precepts, but, once turned away from the direct path of the true way, they are hurried headlong and suddenly by the night and error of their sins.” Or to put it In more technical terms, as Presbyterian minister James Hastings did in his Encyclopedia of Religion, “Often moral ignorance extends to general principles. In the moral life of men there is no fact more familiar than the experience that conscience is kept clear by a consistent course of virtuous conduct, while it is darkened by persistent indulgence in vice. Men may come to prefer moral darkness to moral enlightenment because their deeds are evil. As this darkening of moral intelligence is a natural penalty resulting from habitual disregard of its teaching, the condition has been described in old religious language as judicial blindness. Such moral ignorance, so far from being an excuse for sin, may be its most heinous aggravation.”

And that’s why the little sins matter, because over time they can dull the moral senses and ultimately make you too dumb to avoid committing the big sins. And as this clip from Ultraman so ably demonstrates, while the little sins may be all laughs for awhile, the inevitable big ones really have a way of backfiring on you.

Wonderful as usual. Sorry to hear about your electrical adventure. We too last year were struck by lightening. It blew the phone junction box off the wall of the house, left a three-foot char mark, fried 5 computers, one ancient TV, the stove and all the phone wiring. We were blessed not to have a fire. One of our girls saw the fireball outside her bedroom window.

EEK! Wow! Hope that some of that fried stuff was covered by insurance. And you had no Dr.-Frankenstein-type experiments hooked up at the time. :-)

"One of our girls saw the fireball outside her bedroom window."

Nothing that dramatic here, just a loud pop and that sizzling noise you just know means trouble.

"And you had no Dr.-Frankenstein-type experiments hooked up at the time."

Nothing I wasn't able to finish by candlelight.

That was a real fun blog to read, good work.