BMC MOVIE OF THE WEEK: THE BRAIN EATERS

Strange things are happening in Riverdale, Illinois. A huge, seemingly alien structure has been found jutting out of the earth. Sent to investigate the origin of the mysterious object, Senator Walter Powers discovers that parasites from the center of the earth have infiltrated the town, taking control of the authorities and workers, making communication with the outside world impossible, and leaving the responsibility of stopping the invasion up to Powers and a small group of free individuals.
26% liked it

The other night I had 60 minutes to spare, but rather than watch the shambling husk of Andy Rooney attempt to explain what was confusing him this week, I decided instead to spend that hour with The Brain Eaters. I’m pretty sure I made the better choice.

In case the short running time isn’t enough of a tip off, then let me assure you, The Brain Eaters is pure second-billing fodder from the bygone days of the Saturday afternoon double feature. The creature effects consist of nothing but some fuzzy lumps (eerily reminiscent of Rooney’s eyebrows) adorned with pipe cleaner antennae being pulled by strings, the  soundtrack is comprised of scratched vinyl outtakes from works by Prokofiev and Shostakovich (but credited to fictitious composer Tom Jonson because that name sounds less like a dirty Russian commie), and the hero is played by hard working B-movie and TV vet Ed Nelson (whose previous lead role was as the crab in Attack Of The Crab Monsters).

And yet, The Brain Eaters is still a watchable film. The cast is earnest, the script has some nice surprises (those characters died, really?), and there’s even a brief appearance by a young Leonard Nimoy (misspelled Nemoy in the too-expensive-to-correct opening credits) looking all Gandalfish as the spokesman for the wooly invaders. Plus, it’s got that tried and true plot element found in so many 50’s movies, the communist inspired fear of the communal hive mind and the loss of individual identity.

Now who would have thought so many aliens in the 50s would turn out to be Quietists? As explained in the Columbia Encyclopedia, Quietism is “a heretical form of religious mysticism founded by Miguel de Molinos, a 17th-century Spanish priest (and, bizarrely, something of a Nimoy lookalike).” 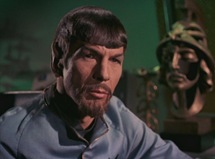 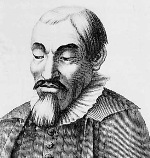 “The essence of quietism is that perfection lies in the complete passivity of the soul before God and the absorption of the individual in the divine love to the point of annihilation not only of will but of all effort or desire for effort… Molinos and his doctrines were condemned by Pope Innocent XI in 1687.”

You know, despite the Buddhist feel of Quietism, one might wonder why the Church never approved of it. After all, in this week’s reading we hear, “There is neither Jew nor Greek, there is neither slave nor free person, there is not male and female; for you are all one in Christ Jesus.” On the surface, that sounds a lot like the annihilation of the self through the absorption into the divine. But as the 1907 Catholic Encyclopedia explains, “The self-abandonment which Christ in the Gospel requires of us is simply the renunciation of our own interest.” It’s a discarding of the sinful attachments which get in the way of our conforming our will and reason to God without actually abdicating those faculties in the process. Unlike the Brain Eaters, God wants volunteers, not drones.

Speaking of droning, here’s Mike & The Bots with their take on Andy Rooney. 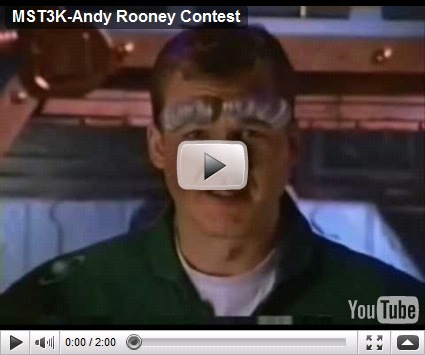 "It’s a discarding of the sinful attachments which get in the way of our conforming our will and reason to God without actually abdicating those faculties in the process. Unlike the Brain Eaters, God wants volunteers, not drones."

I think I'm going to mount that quote on my wall (complete with illuminated lettering).

I loved the Brain Eaters. You are right. This movie was staple of the Saturday afternoon creature features that I grew up with...

Also, my 15 and 17 YO have recently discovered MST3K on Netflix.

Have you found Rifftrax? Mike Nelson and the crew doing very quick spoofs on recent movies.

Rifftrax is truly a Godsend.

Where else can you hear Neil Patrick Harris and Mike Nelson go off on Willy Wonka and the Chocolate Factory? Or the riff on Jurassic Park with Weird Al?

My personal favorite is when they riffed on Alien (The John Hurt/Ian Holm jokes are worth the price of admission alone).

Yep, the Rifftrax stuff is great, as are the Cinematic Titanic riffs. I've stuck with those guys ever since I was trading tapes back during the original MST run. The only thing that's killing me is that every time they have a live event around here, I'm either broke or swamped with work. Watching episodes with an audience adds a whole other level. I went to a screening of MST's Outlaw at Georgia Tech back in the 90s and was literally doubled up in tears.

Coincidentally, Quietism came up in a discussion I was having with a Protestant, who didn't understand why the Church declared it a heresy when he has always thought it described the perfect approach to God. Not that I want to get into that . . .

The main thing we disagreed on is what it takes to be holy. He said that one needs to empty oneself completely in order to be filled with God. I said that as long as we're even the tiniest bit game, God can take whatever we've filled ourselves up with and transform it into Himself. Which isn't exactly what you're writing about here, but which still falls under the "God wants volunteers, not drones" theme.

Excuse me while I sit here and marvel that you were having a conversation in which Quietism just happened to come up :) I'm finding in my forties that the conversations are inevitably turning to kids and waistlines.

(And the pic of Spock didn't hurt, either. Mwah-ha.)

Ever tackle the topic of Providentialism here? I'll have to look through your archives with Google or something.

Nope, I don't think I've touched on Providentialism at any length here, which is odd since I've been at this for years now. (How's that for a frightening thought?)