BMC MOVIE OF THE WEEK: MY SCIENCE PROJECT

Faced with not graduating unless he completes his science project, a high school gear-head sneaks into a nearby Air Force base, looking for some gizmo he can pass off as his own invention. What he finds is an alien energy device that rips holes in both time and space, infesting the school with everything from dinosaurs to the Viet Cong. Writer-director Jonathan Betuel tries to mine some of the same veins as Weird Science and Real Genius (all three films were released in 1985) but with less success--mostly due to a slapdash script. The film veers from being The Breakfast Club to WarGames to Rambo, leaping over plot holes all the way. As the hero, John Stockwell is too low-key for his own good, but Danielle Von Zerneck is appealing as his emerging love interest, and Fisher Stevens and Raphael Sbarge do their best to inject some life into the material. Dennis Hopper (as a hippie-dippie science teacher) chews the scenery with gusto--and at one point shows up wearing the costume he wore in Easy Rider. --Geof Miller
53% liked it

My Science Project is one of those movies that just seems to fall off of most people’s radar as the years pass. And that’s understandable in a way. As part of the unofficial teenage nerd trilogy of 1985, it’s not as funny as Weird Science or as smart as Real Genius. And the overall tone of the film staggers clumsily from scenes of typical teen movie antics like covering cars in shaving cream to moments where the kids have to gut gladiators and mow down mutants in order to survive.

But for the most part, My Science Project is still pretty enjoyable, due in most part to the cast. John Stockwell as the grease monkey who’s NEVER seen “Jedi” and Danielle von Zerneck as the geek girl who catches him on the rebound come across as natural and underplayed (von Zerneck even looks like a real nerdy girl rather than a pole dancer with a pair of glasses on). Fisher Stevens hams it up as always, but still manages to get some good lines (including my favorite, “I’m so scared, I’m thinkin’ about God!”) And it’s hard to go wrong with Dennis Hopper playing an aging 60s activist turned high school teacher (kind of like half the membership of the NEA) who likes to sniff gas to calm his nerves and eventually goes off on a maniacal rant about becoming one with the space time continuum (kind of like, well… Dennis Hopper).

And really, it’s kind of hard to go wrong with the whole idea of a space-time warp opening up inside a high school. Sure, the movie doesn’t really take full advantage of all the comic opportunities the idea presents (nothing in this film comes close to Bill & Ted’s history presentation we’d get to see just a few years later), but it’s still fun watching the kids have to fight their way through everything from Neanderthal men to Nazis, all culminating in a showdown with a T-Rex which actually looks pretty good for a pre-Jurassic park effect. So all in all, there are worse ways to kill 94 minutes than watching My Science Project.

Now, after the credits roll, if you’ve got a hankering for more stories where space and time get all higgledy-piggledy, then this week’s gospel reading might just pique your interest. This reading from Matthew is, of course, the well known story in which “Jesus took Peter, James, and John his brother, and led them up a high mountain by themselves. And he was transfigured before them; his face shone like the sun and his clothes became white as light. And behold, Moses and Elijah appeared to them, conversing with him.” This is significant because, as the Catechism explains it, “For a moment Jesus discloses his divine glory, confirming Peter's confession [that Jesus is the Christ, the Son of the living God]. He also reveals that he will have to go by the way of the cross at Jerusalem in order to "enter into his glory". Moses and Elijah had seen God's glory on the Mountain; the Law and the Prophets had announced the Messiah's sufferings. Christ's Passion is the will of the Father: the Son acts as God's servant; the cloud indicates the presence of the Holy Spirit. "The whole Trinity appeared: the Father in the voice; the Son in the man; the Spirit in the shining cloud." So all in all, with the Big Three appearing together, and the Law (Moses) and the Prophets (Elijah) in attendance as witnesses, the Transfiguration was officially a pretty big deal.

But unofficially, it gets even better. There’s a theory floating around (and I stress, it’s just a theory) that the Transfiguration might also give us a peak into the transcendent nature of God as it applies to space and time. It goes like this. The book of Exodus tells us that “The LORD used to speak to Moses face to face” and on one particular instance “the glory of the LORD settled upon Mount Sinai” and “the cloud covered it for six days”. Centuries later, the book of 1 Kings relates how the prophet Elijah “walked forty days and forty nights to the mountain of God” where he was instructed to "go outside and stand on the mountain before the LORD; the LORD will be passing by." It was there, after a bit of sound and fury, that Elijah heard the small, still voice of the Lord. More centuries later, the LORD walks up into the mountains, is enveloped by a blinding light and and a cloud, and holds a conversation with Moses and Elijah.

You see where this is going, don’t you? What if, in addition to all the other cosmological wonders surrounding the Transfiguration, we’re also witnessing a warping of time and space? What if the three individual trips to the mountains related in Exodus, 1 Kings, and the Gospels are all really the same event told from different perspectives, even though they’re temporally separated by hundreds of years? It’s just a theory, and there’s absolutely no danger to to our theology or faith if it turns out to be a false one. But if it is true, then what a perfect example of the immensity and incomprehensibility of our vast and mighty God. It’s even cooler than a dinosaur wrecking the school cafeteria. 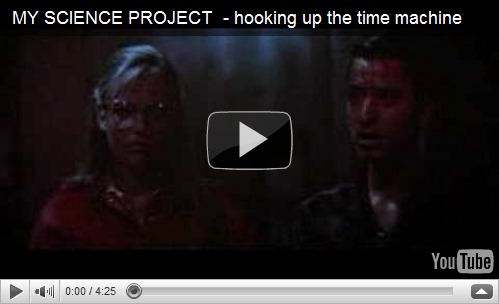 Of course, the last 2 things I watched just before this were Stargate:Atlantis and the death of Dr. Who #10 and it did seem like a weird fusion of the two.

I really like how the clip gives you no context as to why there's three guys running around in Stormtrooper helmets vandalizing a car.

that is pretty crazy. thanks for posting!