As we discussed in our previous post, low budget horror movies produced by evangelical Christians seem to be a growth industry these days. However, these type of “soul winners” have actually been around for decades. A few years back we reviewed the relatively new Evil Behind You along with the Christian exploitation classic The Burning Hell,  but there are plenty more out there. So if you ever find yourself in the mood for a Christian exploitation film festival, here are some other notable entries in the genre you might possibly (maybe, probably not) find worth checking out. 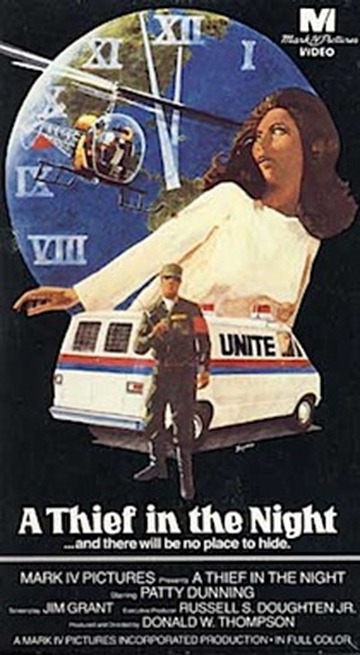 A THIEF IN THE NIGHT (1972) – Like The Burning Hell, this film was shown primarily in churches, but has since become something of a cult classic among secularists due to its delirious combination of no budget cheesiness with unabashed earnestness. A Thief In The Night and its three sequels(!) chronicle The Rapture and the events following it as imagined by premillenial dispensationalists. The creators of Left Behind freely acknowledge the debt they owe this film series. All the movies are available on YouTube. 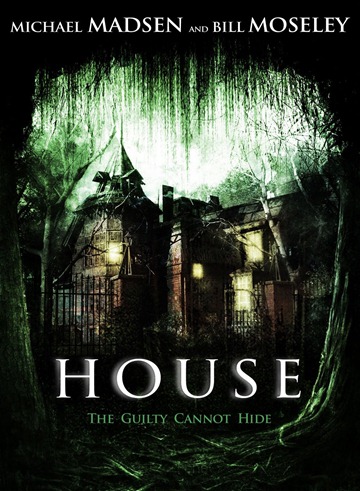 HOUSE (2008) – House is adapted from the popular Christian horror novel by Frank Peretti and Ted Dekker and, in all honesty, is probably too mainstream and professionally made to be included on this list. But with a story involving a group of stranded travelers who become trapped in a mysterious house with a homicidal maniac who claims to have murdered God, the subject matter is right up our alley, so why not go ahead and include it?  House is readily available for rent and on Netflix streaming. 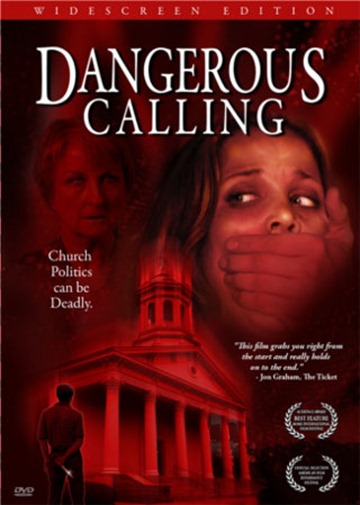 DANGEROUS CALLING (2008) – I haven’t actually seen this one yet because it’s still stuck in the Very Long Wait section of my Blockbuster queue, but I’ll pass it along anyway. Dangerous Calling  tells the story of a Baptist preacher who takes over head pastor duties at an existing church and finds that somebody is willing to resort to murder over the changes he institutes. From what I’ve seen over the years, this is only a slight exaggeration of what happens in real life in these situations. 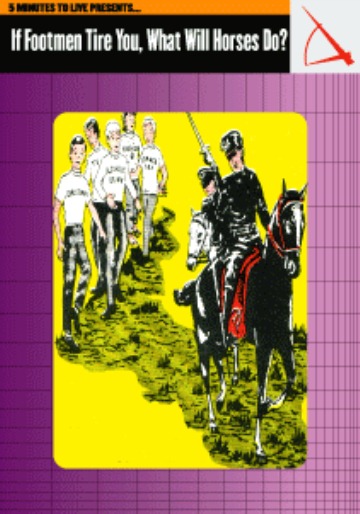 IF FOOTMEN TIRE YOU, WHAT WILL HORSES DO? (1971) – From the same folks who brought you The Burning Hell comes this tale of a blood soaked takeover of the United States by Jesus-hating communist rat bastards. It’s hard to pick a highlight, but I’d have to go with the scene in which a dirty commie tries to convince a classroom full of children there is no God because no candy magically appears after the kids are forced to pray for it. Easy to find on YouTube. 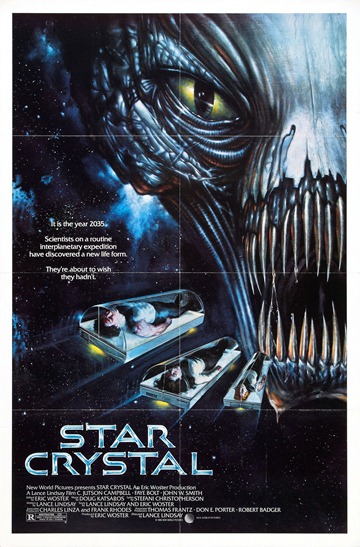 STAR CRYSTAL (1986) – I’m not really sure if this flick was made specifically with an evangelical Christian audience in mind or not, but it may as well have been. For over an hour the movie plays out like an ultra cheap Alien knock off (all the way down to a bad imitation of Sigourney Weaver’s hairdo), but then takes a sudden bizarre turn in the final ten minutes when the murderous monster discovers a copy of the Bible in the ship’s computer, becomes a born again Christian, and changes its evil ways. Sola Scriptura In Spaaaace! If you want to risk it, I think you can still find this for rent from Netflix. 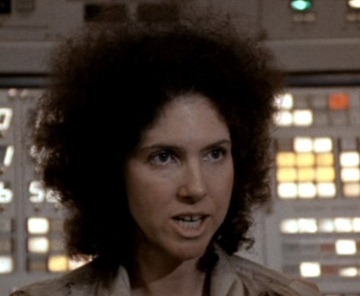 Now one of the things that should be obvious is that all of these movies approach their subject matter through the lens of evangelical Protestantism, with nary a single papist to be found amongst them. But why is it that Protestants seem to have cornered the market on bad religious movies? Well, if I had to speculate (and you know I just gotta), I think the answer can be found in the differences in the manner in which Catholics and evangelical Protestants worship at Church. You see, while the megachurch movement has amped up the music and video content immensely over the past couple of decades, the centerpiece of evangelical services is always going to be those thirty to forty minutes (or more if the pastor is feeling “particularly inspired”) of preaching delivered after the collection plates are passed.

To understand how this impacts their movies, let’s consider this quote from the makers of Harmless, the upcoming anti-porn found footage movie. “Why are we doing a project like this?” they ask themselves on their official website, “Because films are not only entertaining but they’re also a way to teach people. Society learns their morals and values through music, film and television. Pornography is such a huge problem that simply telling someone how dangerous it is usually doesn’t work. You have to tell a compelling story to catch someone’s attention and then educate them while they’re being entertained.” There’s nothing necessarily wrong with that statement, but compare it with the one made by Pixar’s Emma Coats, who recently offered advice on how to tell a good story. “Trying for theme is important” she explains, “but you won't see what the story is actually about till you're at the end of it.” Well, if Coats is correct (and you have to admit that Pixar has a pretty good track record telling stories people enjoy), then evangelical Protestant filmmakers are doing things backward, coming up with a message first and then trying to build a story around it. In other words, just like their church services, Protestant produced movies are all about the preaching.

And to be fair, it’s not like they don’t recognize they have this problem. As Protestant author and film critic Scott Nehring noted in Relevant magazine, “Rather than developing organically, the average Christian film is more pushy and sanctimonious than the global-warming agenda movies. Violence is almost non-existent, salty language never happens, unmarried people never struggle with lust and evil is never very bad, because showing various forms of sin is not allowed. By movie’s end, everyone is converted with no residual issues. Life is reduced to an after-school special with prayer thrown in for good measure.” Ouch. I’m glad the Protestant said it and not me. But who knows, people get better with practice, so maybe the new crop of evangelical horror movies we discussed in the last post will be able to overcome these storytelling problems. We’ll see.

But that being said, what about us Catholics? Since we’re subject to Jesus’ command to “Go, therefore, and make disciples of all nations” the same as all other Christians, why aren’t Catholic filmmakers out there making the same kind of low budget proselytizers our Protestant brethren are? We’ll get into that in the next post.

"House" is now on the Netflix queue, and the YouTube-available ones are next. Can't wait!

I'd agree with your assessment about the Protestant worldview of movies. As an Apostolic Pentecostal friend of mine once said of her church's summer revivals, "They run for so many days to make sure they've crammed their message all the way down your throat."

I spent a few months with the Pentecostals as a teenager. The revivals may run long, but on the plus side, they sure can dance.

"It’s hard to pick a highlight..." As a woman with a complete head of white hair at age 30, highlights are a sore point. Shouldn't you be looking for lowlights? The zipper in the back of the costume, the monster with bathmat suckers all over the costume (why? asked my 5-year-old), the County Sheriff standing around waiting to be asked directions by wandering people in the dark, people dumbly splitting up when its obvious that the monster only attacks lone persons, etc? :)

THANK YOU SO MUCH FOR THIS COLUMN! ;)

Scott Nehring shares an important point; christian movies oftentimes end up being quite bland. Right now I think about an article on my blog about a similar difficulty: How can we incorporate not only christian values but some cornerstones of our faith in a decent computer game? I think in the realm of computer games this problem is even enhanced because ideology, if taken seriously, becomes embarrassing when forced into a decent game mechanism (and/or the game mechanism becomes boring).

I mean, how should that work without a sense of irony: "You leave the confession. Your SP (Sin points, if the rise to 100 you'll be damned) went down to zero" "KILL PEASANT" "Your SP increase to 100" "ENTER CONFESSION".

I'm still meditating about this problem, but right now I think a decent mixture is going back to the "big" good vs evil stories where the characters save the world, and (ESPECIALLY concerning game mechanisms!) a good sense of humor which should be also visible for the player.

Well, That one was quite deviating from the realm of movies... If I wrote the article, i can, if anybody is interested, send you a link to (if I find the time!) an english translation of it.

But I think the same solution is applicable to christian movies as well. The problem with a lot of them is that they take their stuff too seriously. OF COURSE the stuff is serious, but the danger is that everything becomes like a chick-track...

Oh, another thing which I think might work for both art forms: We Catholics have a huge tradition with customs, symbols, spooky fairytales etc. Perhaps it is possible to include these symbols in a proper manner. In that sense a decent horror-movie might make use of the imagery and the symbolism associated with Vanitas (http://en.wikipedia.org/wiki/Vanitas), Visions from protagonists might resemble apparitions of the Blessed Virgin etc. pp.

Phil, thanks for the idea for this series of posts. I hope there was one or two movies in here that match what you were looking for.

I'm afraid I don't know too much about Christian video games, although I do remember when the Left Behind game came out. (http://en.wikipedia.org/wiki/Left_Behind:_Eternal_Forces) It's kind of weird that they gave you the option of playing the Antichrist.

"Oh, another thing which I think might work for both art forms: We Catholics have a huge tradition with customs, symbols, spooky fairytales etc."

Funny you should mention that, as that's part of the next post.

There's too strong a streak of iconoclasm in Protestantism. I noticed this mostly with the Fireproof and Courageous movies. They've chosen a visible medium, but don't really trust it to convey the message. If it isn't preached (and preached, and preached) then you can't possibly have gotten the message.

Excellent point. You guys are already writing the next post for me.