BMC MOVIE OF THE WEEK: SANTA AND THE ICE CREAM BUNNY 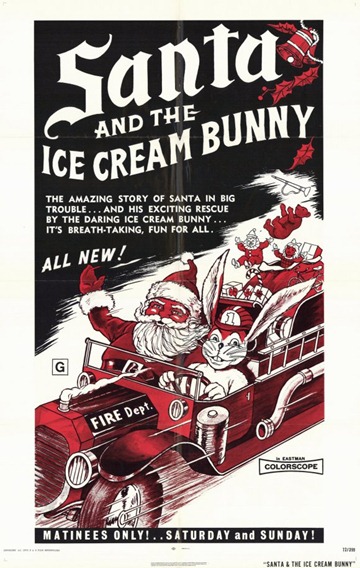 “This strange children's film was partially directed by exploitation filmmaker Barry Mahon (The Beast That Killed Women). Santa Claus sits in Florida, sweating and dejected until some kids bring animals to help him get his sleigh out of the sand. It doesn't quite work, but Santa tells the teens a story anyway, which is actually Mahon's 1970 film Thumbelina, featuring Shay Gardner, also one of the beach kids here. Eventually, a man in a bunny suit gets Santa's mission operational again, bringing Mahon's puzzling excursion into family entertainment to a close.” – rovi’s AllMovie Guide

A sad truth of life is that there are some things which once seen can never be unseen. I personally learned this the hard way back in the early days of the Internet when I naively clicked on a link which promised to provide a picture of the woman who inspired the James Bond film Octopussy. Oh, the price of Wisdom. Thankfully, most children’s movies are usually free of any sights which might seer the unsuspecting mind. But alas, such is not the case with Santa And The Ice Cream Bunny, a movie which cruelly offers us the vision of the titular man in red rising from his sleigh which has become unceremoniously stuck on a beach somewhere in Florida, only to reveal a grotesquely large sweat stain puddled in the crotch of his suit. And the loathsome sight is unavoidable because Santa’s posterior is (inexplicably) center frame and pointed directly at the camera. You know, around these parts we sympathize with the limitations of having a low budget for your movie, but if you inadvertently film the traumatizing imagery of a pudgy man with a puddle of perspiration in his pants, is it really too much to ask for a second take? 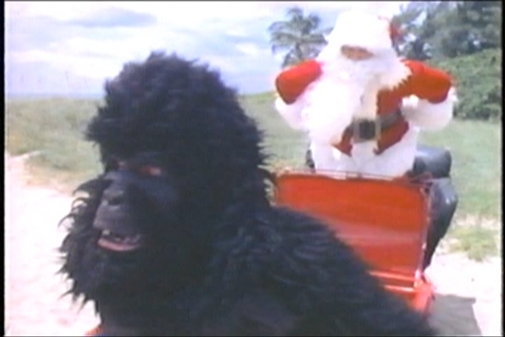 Fortunately, the rest of the movie isn’t quite as horrifying as that moment, but it is just as baffling. And it starts right from the very beginning where we find Santa’s sleigh stuck in the sand on a beach, which I suppose could happen, yet (inexplicably) the magic flying reindeer one would assume could easily extricate Mr. Kringle from the situation are AWOL. Instead, the jolly one decides to seek help by telepathically summoning a group of children who are in the middle of typical childhood activities like playing ball, wrestling, and (inexplicably) jumping off the tops of their houses using patio umbrellas as parachutes (which some parents must have sanctioned and then allowed to be filmed). All the kids, including (inexplicably) Tom Sawyer and Huck Finn, arrive at the site and, after some deliberation, decide the best recourse would be to bring an endless stream of animals to have a try at pulling the sled free. They manage to drag in a sheep, a donkey, a cow, a horse, a pig, and (inexplicably) a guy in a gorilla suit, but none of them are up to the task.

When all that fails, Santa decides to walk down the beach, use a payphone, and call a tow truck. No, not really. What he actually does (inexplicably) is decide the best course of action would be to take a seat (most likely accompanied by a wet plop) and tell the kids a story. About Thumbelina. Because nothing could be more applicable to the situation than the story of a small woman born from a barleycorn who gets kidnapped by toads and almost forced to marry a mole. Look, to save me from having to type the same thing over and over, can we all just agree at this juncture that the word inexplicable pretty much applies to the whole film? 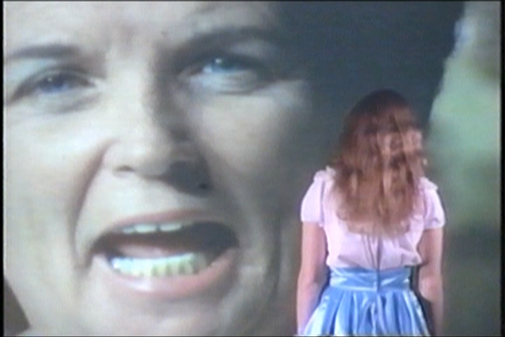 So, where were we? Oh yeah, Thumbelina. This is the point in Santa And The Ice Cream Bunny in which the filmmakers made the decision to insert an entirely different movie into the middle of the one you actually paid to see. Not short flashbacks to an earlier film or stock footage or any of those other tricks to extend running time so familiar to B-movie fans, but an entire movie with credits and all which had been released just the previous year. Actually, movie is probably too kind of a word. Thumbelina is really a filmed version of a late 60s children’s theater production complete with cardboard sets, paper mache puppet heads, and a stoned lead actress dressed like Jan Brady. Depending on your level of sobriety you’ll either find the whole thing charming and retro in a low rent Sid & Marty Kroft kind of way… or you’ll be completely unnerved. And after that long bit of padding is mercifully over and done with, the Ice Cream Bunny (a guy in a rabbit costume only slightly less disturbing than the one in Donnie Darko) finally shows up in a fire truck and drives Santa to the Pirate’s World amusement park, at which point you realize this entire exercise in misery has been nothing more than a promotional tool to drum up business for a tourist attraction soon to be obliterated by the opening of Disney World.

But really, it’s not the crass commercialism of the endeavor that’s so bothersome about Santa And The Ice Cream Bunny. I mean, if pimping a theme park was all it took to ruin a film, I’d just go ahead and swear off Disney movies for the rest of my life. No, what’s really grating is the film’s portrayal of Santa Claus. Now as a Christian I’ve long accepted that the modern Coca Cola version of Santa we have today is far removed the saint who inspired him. The original Saint Nicholas (the 4th century bishop of Myra) not only secretly delivered gifts to children, but he was just as quick to smack a heretic like Arius upside his noggin for saying something stupid. As fun as it would be to watch, that’s not the kind of scene I expect to see show up in a Rankin Bass production anytime soon. But at least most modern versions of jolly old St. Nick show him to be a compassionate, self-giving, competent leader. And even when we get an insensitive jerk like the Santa from Rudolph The Red-Nosed Reindeer, it’s only because he’s overworked and has a nagging wife. But this Santa who hangs out on the beach waiting on the Ice Cream Bunny? He’s a useless bozo. For the love of Christmas, man, get proactive, get your butt out of the sleigh, and please, please, put on a fresh pair of pants! Is this really the guy we want our children waiting expectantly for during this time of year? 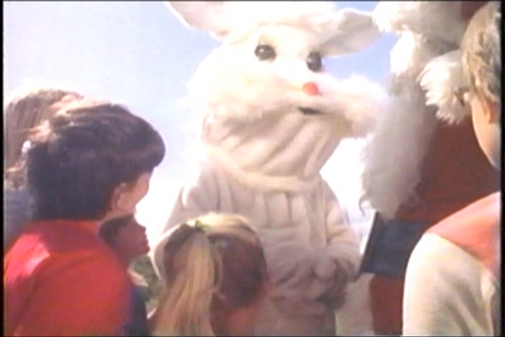 Maybe it would be best if we remind our kids there’s someone else we should be waiting on this Advent season, someone with a little more to offer than even the best version of ol’ Papá Noel. We should teach them to be more like the folks we find in this week’s gospel, “filled with expectation” and awaiting the Christ. As Pope Benedict XVI informs us, “Advent, this powerful liturgical season… invites us to pause in silence to understand a presence. It is an invitation to understand that the individual events of the day are hints that God is giving us, signs of the attention he has for each one of us. How often does God give us a glimpse of his love! To keep, as it were, an ‘interior journal’ of this love would be a beautiful and salutary task for our life! In the language of the ancient world it was a technical term used to indicate the arrival of an official or the visit of the king or emperor to a province. However, it could also mean the coming of the divinity that emerges from concealment to manifest himself forcefully or that was celebrated as being present in worship. Christians used the word ‘advent’ to express their relationship with Jesus Christ: Jesus is the King who entered this poor ‘province’ called ‘earth’ to pay everyone a visit; he makes all those who believe in him participate in his coming, all who believe in his presence in the liturgical assembly. The essential meaning of the word adventus was: God is here, he has not withdrawn from the world, he has not deserted us.”

Without dwelling on the events of the past week, that last bit bears repeating. God is here, he has not withdrawn from the world, he has not deserted us. We wait for signs during Advent, not of something which is missing, but of something present we just may not have recognized yet. Wait for it. In time He will be revealed.

Wow. That's all I can say. Wow. You actually sat all the way through this movie? Probably more than once since you wrote about it on your blog.

Well, the first time I ran across it, it was on YouTube, so I took it in chunks. But fortunately Rifftrax released a version, so it's a little easier to get through these days.