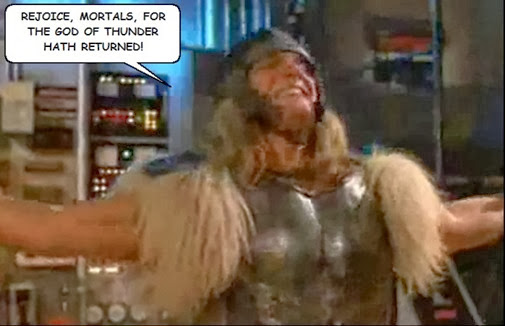 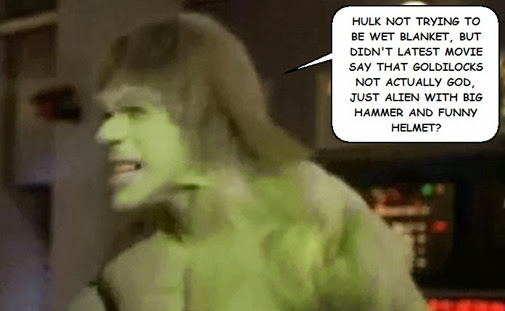 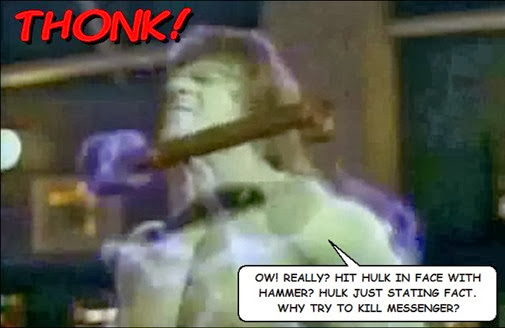 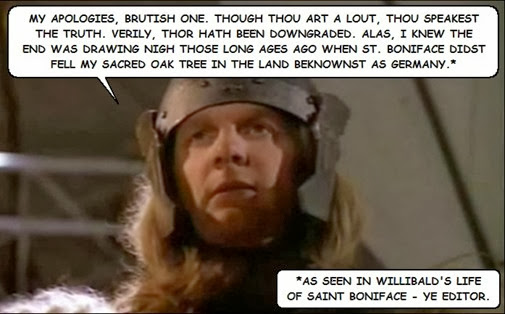 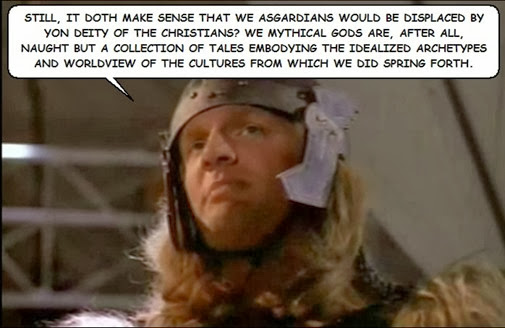 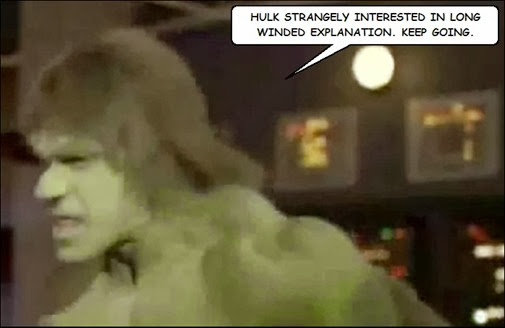 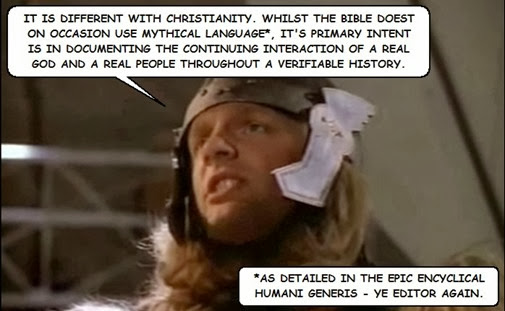 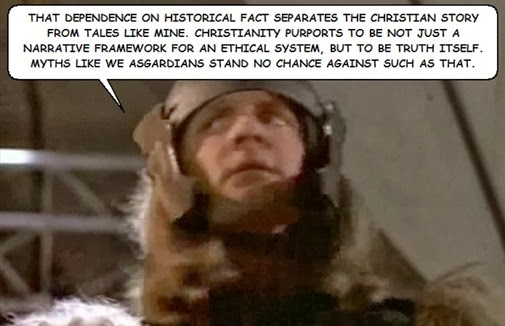 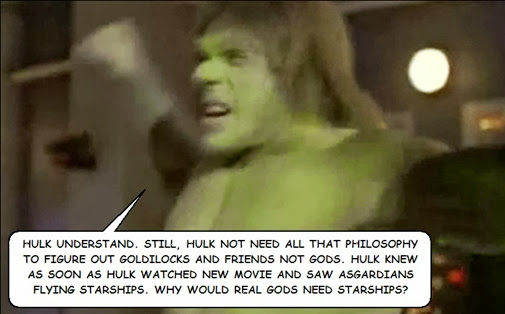 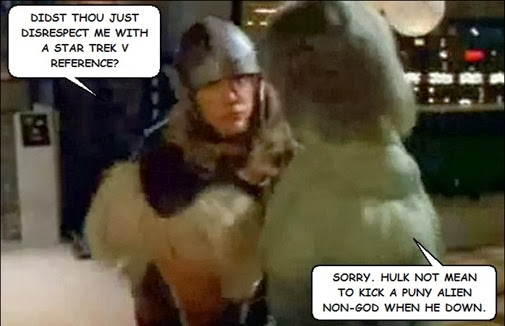 What they said. Thanks for the laugh. I needed it today.

Thanks for the kind words, but this one wrote itself as soon as Thor stepped on a spaceship. The movie was asking for it.

I dunno, even though Odin insisted in the movie that they weren't gods, it seemed to me that effectively they were. They were involved in the creation of the universe (hello, separating the dark from the light?), and if the Supreme Being exists in Marvel-land he's apparently so hands-off as to let the place be swallowed up in darkness again because somebody gets hold of a magical substance. Norse pagans didn't think their gods were omnipotent or unkillable, so it seems to me that they weren't too far off base here.

Indeed, you abide in awesomeness.

Very interesting points, Camassia! Now let's see if I can salvage my joke :)

Okay, so tonight's Agents of SHIELD pretty much solidifies the Asgardians are aliens idea. But, thanks to Captain America's comments in The Avengers, we know that in the Marvel movie universe, at least some portion of the population believes in a Supreme Being. So, assuming He's there, how would that work?

Well, based on the Catechism and statements from various Popes, it's well known that Catholics aren't bound to a literal interpretation of Genesis. We can, based on the evidence, accept a form of evolution, as long as we acknowledge that it was a theistic/guided one (no neo-Darwinian theories for us).

Given that, I see no reason that a God in the Marvel movie universe couldn't have used beings such as the Asgardians as tools for the creation of this planet. Notice the movie makes no mention of them having a hand in creating souls, which is the providence of God alone. That's the easy part.

Now, as for the magical universe destroying goo, well, it never, ever happens does it? In a universe filled with near-omnipotent adversaries, God seems fit to have created a world which provides for the emergence of heroes who time and time again beat them back, no matter what the odds. God often works through His creations. So the universe, it seems, will end when God sees fit, not when some schmoe digs up an artifact.

That's how I figure it could all work at this moment. Of course, Marvel can easily ruin it based on how they handle the Infinity Gauntlet. We'll see. But for now, how does my theory grab you?

Well, you can always back into a Supreme Being based on first causes -- anything that happens, you can say, "Yeah, but what caused THAT to happen?" But it seems to me that the God of the Bible is more than a first cause, he's a continuing actor. That seems to be the basis for his forbidding the worship of other gods, because ultimately he wants to be recognized as the one who gets the important things done. To put it another way: if the Aesir et al. are the ones who actually do stuff like save the world -- or the universe -- why SHOULDN'T the people worship them? Give them offerings, thank them for their works, beg them for favors, pretty much like people do with earthly rulers anyway? It doesn't necessarily exclude the worship of a higher being -- some pagan religions recognize both kinds -- so I don't see why Yahweh would come down so hard against idolatry unless he really did cut out the middleman.

On another note, I just watched the latest Agents episode myself. I'm wondering if anyone else thinks the resuscitation scene offered us a broad hint about a certain unexplained plot twist in The Dark World that involved a certain similar injury?

" I'm wondering if anyone else thinks the resuscitation scene offered us a broad hint about a certain unexplained plot twist in The Dark World that involved a certain similar injury?"

Good catch, hadn't thought of that!

"To put it another way: if the Aesir et al. are the ones who actually do stuff like save the world -- or the universe -- why SHOULDN'T the people worship them?"

Just for the sake of continuing a fun speculative argument... if we followed that line of reasoning, why then wouldn't we worship guardian angels, soldiers, doctors, or even ourselves, since we are the "hands and feet of Christ" in the world? Because, from the Catholic standpoint at least, we recognize a God who works through his creations all the time, but we reserve our worship (or we're supposed to) for the creator himself.

Based on the Marvel movie universe as portrayed so far, the fault for the false worship actually lies with the Asgardians. They know they're not gods, but accepted the adoration anyway. Loki and Odin have both shown themselves arrogant enough to be okay with this kind of arrangement. Sounds like they've got some things to answer for to the real deal once they finally do die (which the latest movie shows does happen).

If I may jump in, you both might get a kick out of a book I bought a few months ago, called The Avengers and Philosophy. Fascinating, and very funny, stuff. In the book, there's a chapter called "'No Other Gods Before Me': God, Ontology, and Ethics in the Avengers' Universe" by Adam Barkman.

Since I haven't seen Thor: The Dark World (and don't intend to, long story, thank you) I can't speak to your "death" in it, but the chapter does point out the various ways God shows up in the comic Avengers' multiverses. To cut to the chase, God does exist in the multiverse, and He does things a lot like our God really would. And, though I've not seen the issues involved, he's drawn to a lot like Stan Lee. :)

I could give a run-down of the short chapter if anyone is interested. Summation: Barkman's case is well made that no one in the (comic) Avenger-verse is indestructible or eternal but God. The Asgardians, among others, know that.

Yes, I am that geeky and nerdy.

Oh great, another book I have to get! At some point my Kindle is going to openly rebel and refuse to accept one more thing onto its overcrowded hard drive :)

I'll confess, my answer got long and inappropriately serious for the venue, so I turned it into a post on my own blog. Cheers! http://camassia.blogspot.com/2013/11/from-whence-cometh-my-help.html

It's always a compliment whenever something here inspires a post elsewhere. I'll definitely link to it next time I put up one of my NOW SHOWING posts.