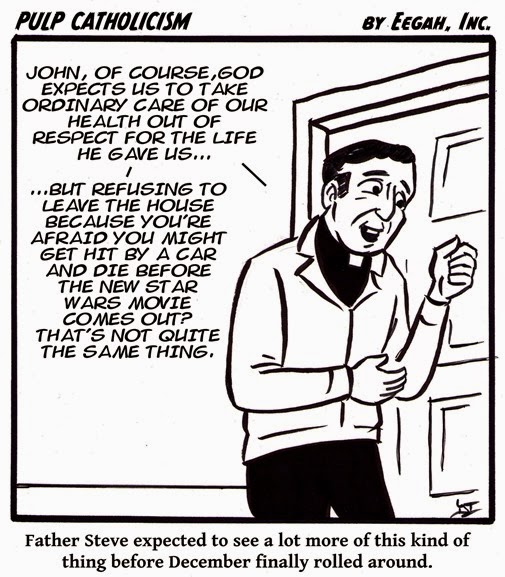 So, finally, I got to see "Sharknado." (No Netflix--'though apparently I need to be watching "Daredevil") It was so, so awful, and so very satisfying. And then I badly needed to see "Jaws" again. Some kind soul with appalling taste donated "Sharknado" to the public library.

Took the family to see the Rifftrax presentation of Sharknado in the theaters. Some of the best fun I had at the movies last year. Sharknado II is more self-aware, so not quite as much fun, but still worth a look.

As for Daredevil, it's pretty good. Plus, the presentation of religion is respectful enough that militant atheists have already started iMDB threads condemning the show. That alone makes it a must watch :)

I skimmed over a Reason article that claims that Daredevil basically has one superpower: torture.

"On the TV series 24, torture is necessitated by the ticking clock. Harsh measures are underwritten by the certainty and imminence of terrorist apocalypse. Daredevil doesn't even bother with such shilly-shallying justifications.

The show spends a lot of moral energy worrying about whether or not Daredevil/Matt Murdock will or won't commit murder. But violence short of actually killing someone is barely even greeted with a shrug."

Is that a fair point?

Well, I suppose it's fair from a real world perspective, but as the Reason article itself goes on to acknowledge, the whole superhero genre hinges on the fact that we're willing to suspend certain real world concerns. In real life, nobody in their right mind wants an obsessed billionaire taking the law into his own hands and waging a one man war in the middle of the city. In comics, though, we "accept" such costumed vigilantes because of the unwritten law in that fantasy universe that there is no other viable solution. It's "okay" for Batman to dangle a guy off the roof, because there's no other way to save the day.

That being said, what makes the Daredevil show interesting to me is that it does try to introduce some real world morals into the formula. I'm not sure what show the Reason guy watched, but I thought it was pretty clear that both Daredevil and the doctor were kind of sickened by what they were doing in the torture episode, but felt compelled to do it anyway to bring down a child slavery ring. That alone would be plenty enough justification for most shows (i.e. 24), but Daredevil always ends up back with his priest trying to make sure his actions reconcile with his faith (which is what is setting off the gag reflex for discussion-board atheists). And, amazingly, the priest doesn't always let him off.

Daredevil is no doubt a bad Catholic (notice he never feels too much guilt over his sexual sins), but he's trying to be a good Catholic. I can sympathize with that.