THE JUKEBOX HERO HYMNAL: Hymn 024: I Still Believe by The Call

Let’s be honest here, probably the first thing most everybody thinks of when they hear the opening chords of I Still Believe is this… 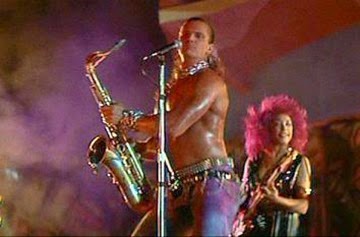 Yep, besides his work with Tina Turner, the one thing singer/saxophonist Tim Cappello is best known for is his cameo in 1987’s The Lost Boys in which he not only performed his cover of I Still Believe, but also flexed his impressively oiled pecs. So indelible an image did Cappello strike that to this day you can still find a “Greased up Sax Man from The Lost Boys Appreciation Society” fan page on Facebook.

But we’re not here to praise Cappello, nor to bury him for that matter. No, what we’re actually interested in is the original version of I Still Believe as released by The Call on their 1986 masterpiece, Reconciled. Hailed by Peter Gabriel (who guested on the album) as "the future of American music," Reconciled was one of those works which by all rights should have catapulted its creators to mega-stardom, but for some reason never really caught on with the general public.

One group that did take notice, however, was the fans surrounding the burgeoning contemporary Christian music scene at the time. As he recounts on his blog, the onetime manager of Maranatha Village, the influential southern Californian Christian bookstore that would spawn Contemporary Christian Music magazine, was a longtime champion of The Call and was considering stocking their album. However, knowing his customers would be concerned about seeing a secular artist’s products being so prominently featured on the shelves, he sent correspondence to Elektra inquiring about the band and any religious affiliation they might have. He was shocked, to say the least, when he received a personal reply from the band’s vocalist/guitarist, Michael Been. Attached to the letter was a copy of the Apostles Creed and a hand written note proclaiming, “This is what I believe.” Needless to say, Reconciled was quickly given a place of honor at Maranatha Village and I Still Believe went on to become something of a crossover hit for the band on Christian radio stations.

Really, though, it’s not that much of a surprise if you pay attention to the lyrics. If ever there was a song to be sung during the post Lenten season, this is the one…

So, if you take Been’s note at face value, then basically what he’s singing about is that, even after all the hardships he’s faced in life, he still finds the faith to say this…

I believe in God, the Father Almighty, Creator of heaven and earth; and in Jesus Christ, His only Son, our Lord: Who was conceived by the Holy Spirit, born of the Virgin Mary; suffered under Pontius Pilate, was crucified, died and was buried. He descended into hell; the third day He rose again from the dead; He ascended into heaven, is seated at the right hand of God the Father Almighty; from thence He shall come to judge the living and the dead. I believe in the Holy Spirit, the Holy Catholic Church, the communion of Saints, the forgiveness of sins, the resurrection of the body, and life everlasting. Amen.

Oh yeah, that makes adding I Still Believe to the Jukebox Hero Hymnal pretty much a no-brainer. So listen up and enjoy. And if you just can’t live without Cappello’s sax, then go ahead and fire up that version as well. After all, as long as we’re being honest here, it’s not like you’re the only one who still has a copy of The Lost Boys soundtrack lying around the house somewhere.

Email ThisBlogThis!Share to TwitterShare to FacebookShare to Pinterest
Labels: The Jukebox Hero Hymnal

There was a time when I did the music for a young adult group, and I insisted this song be added to the rotation. Love it. Still love it. One of the highlights of my life was to catch The Call perform this at Cornerstone '97, and I had a chance to thank Michael Been personally (who was, I suspect, a little surprised over my enthusiasm over it).

He will be missed. RIP.