Since I’ve recently felt the urge to experiment with digitally coloring my weekly Pulp Catholicism comics, I thought I would go back and start adding it to some of the old ones as well. Now I could just do what the movie studios do, which is re-release these things as “special editions” and leave it at that. But, that kind of feels like cheating, so I think every time I post some newly-colorized old comics, I’ll throw in a little extra commentary as well. 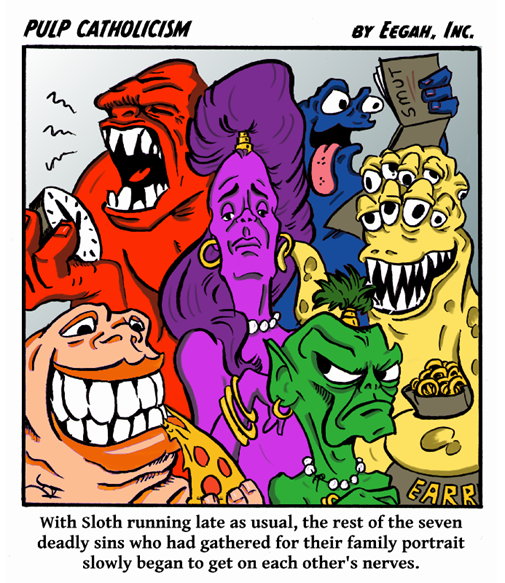 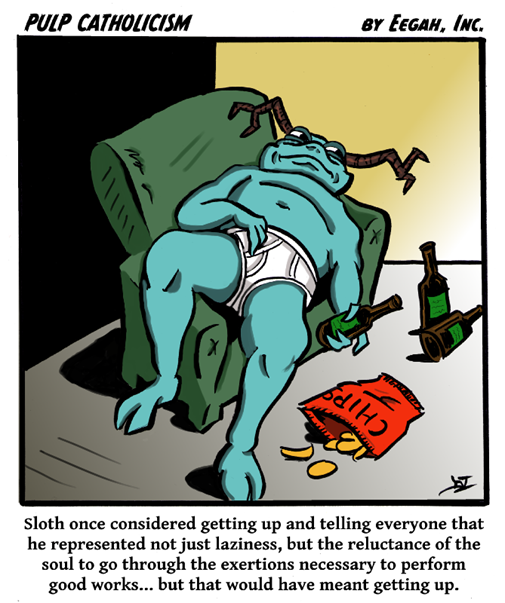 Starting off with the seven deadly sins seemed a natural because there are some old artistic traditions that associate certain colors with each vice. These aren’t hard and fast rules, of course. As Gertrude Grace Sill points out in her Handbook of Symbols in Christian Art, “Color may have opposite symbolic meanings, depending on the context. Red may represent love, as in the cloak of St. John the Evangelist, a man of action and great love of God, or sin, as a red cloak worn by the Devil.” That being said, the colors most often associated with the seven deadly sins are as follows:

Why these precise colors came to be associated with each particular sin is anybody’s guess, but one possible explanation can be noodled out if you compare them with some of the good things the same colors often symbolize in art. The color red, as mentioned above, can not only stand for wrath, but for great love. Basically, red seems to be utilized when an artist wants to communicate intense feelings, good or bad. Then there’s blue, which gets assigned to lust, but is also (as all good Catholics should know) the hue most associated with the Virgin Mary. You don’t get more chaste than the Virgin Mary.

This use of color seems counterintuitive at first, especially if you’ve ever had any basic art lessons. Blue sits opposite orange on the color wheel, after all, so you would think that if the virtue of chastity is to be represented by blue, the vice it opposes, lust, should be rendered in orange. That would be reasonable, right?

Looking at it from a theological perspective, however, it makes perfect sense to make them the same color. You see, as Aquinas pointed out, evil is not the equally powerful opposite of good, but rather a privation or absence of some good which belongs properly to the nature of a creature. That means when you think of the seven deadly sins and their corresponding virtues, it’s better to think of them as being on a sliding scale rather than things sitting opposite one another, something like this…

So, on the blue scale, for instance, you would have lust on one end and chastity on the other. It’s just a matter of which end you push your actions and thoughts towards. The color of the line doesn’t change, only the position of your marker on it. And for me, that’s as good an explanation as any as to why artists have used the same colors to represent seemingly opposite virtues and vices.

Well, that’s the one I’m going with, anyway. It’s certainly easier than trying to come up with my own color scheme for these things.

Great! I loved the Sloth one!

Oh, dear - this means I'm a member of the Rainbow Coalition?!

Well, you can always say you're a member of the original rainbow coalition from around Noah's time, see how that goes over.