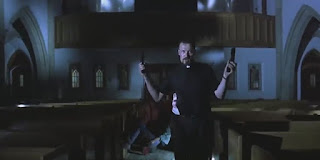 Shadow Builder (1998) Foul-mouthed doubtful priest Michael Rooker (!) protects a potential saint from a demon. Sinfully bad CGI, but otherwise watchable. TIL: Even if the presiding priest is in a state of mortal sin, a mass is still valid if the proper matter and form is used.

Short Feature: Shadow Builder (1998) In which Father Michael Rooker is having none of your ignorance today. Language warning, though that's probably redundant since we already mentioned Michael Rooker is in the clip. Obviously the 96% of clergymen who never touched a child in their life would handle this situation with more charity, but on the inside... And yes, 96% innocent indicates 4% guilty, and that's 4% too many, but it is less than, say, public school teachers, who come in at 5% to 7%. That being said, let's all keep praying and working to get that number down to 0% while attending to the healing of those who suffered from any type of abuse.