BMC MOVIE OF THE WEEK: I WALKED WITH A ZOMBIE

RKO producer Val Lewton seemed to thrive upon taking the most lurid film titles and coming up with pocket-edition works of art. Saddled with the studio-dictated title I Walked With a Zombie, Lewton, together with scripters Curt Siodmak and Ardel Wray, concocted a West Indies variation on Jane Eyre. Trained nurse (Frances Dee) travels to the tropics to care for Christine Gordon, the wife of seemingly abusive Tom Conway. At first, Dee merely believes her patient to be comatose. But as the drums throb and the natives behave restlessly, Dee tries to bring her patient back to life by jungle magic. Conway is racked with guilt, believing himself responsible for his wife's condition; his guilt is stoked by Conway's drunken brother James Ellison, who has always loved Gordon. Utilizing very limited sets and only a handful of extras, director Jacques Tourneur manages to evoke an impression of an expansive tropical island populated at every turn by voodoo worshippers. Many of the sequences, notably Frances Dee's first languid stroll into the midst of the native ceremonies, have an eerie dream-like quality that pervades even the most worn-out, badly processed TV prints of I Walked With Zombie. – AllMovie Guide
73% liked it

So what do you get when you mix together a miniscule budget, some second tier actors, and a corny exploitative title. Well, according to Martin Scorsese and a host of others, you get one of the best horror films ever made. And I’m certainly not going to be the one to argue with them. Even if I Walked With A Zombie had nothing else to offer but the oft cited scene in which nurse Betty walks her catatonic patient through a field of sugar cane at night while the wind whispers through the stalks and voodoo drums sound in the distance, it would still be one of those movies that sticks with you long after you watch it.

Fortunately, I Walked With A Zombie has a lot more going for it than just one iconic moment. Other memorable parts include Betty coming upon the ghastly pale Jessica for the first time as she wanders mindlessly through the dark corridors and Betty’s confrontations with the off kilter Calypso singer whose song lyrics would be more fitting for a Greek chorus. But it’s not all just imagery either. The characters feel real and layered, the script is extra smart, and Jacques Tourneur’s direction keeps the whole affair in a slightly dreamlike state where you’re never quite sure what is fact and what is fiction.

Really, about the only thing I Walked With A Zombie is missing is an actual zombie. Oh sure, there MIGHT be one, maybe even two or more. But again, you’re never told one way or the other. Still, even though you are left with doubts about whether or not Jessica is truly dead, there can be no doubt that she is absolutely lifeless. In fact, though Jessica is by far the worst off, all of the occupants of the Gordon plantation appear to exist in various states of half life as a result of their less than honorable relationships with one another. It’s only the island’s other inhabitants, the deeply religious voodoo worshipers, who seem vigorous and alive. And it’s only when Betty begins to bring the two groups together that the Gordons begin to show signs of life again. At least those for whom it’s not too late.

In a sense, because of the way they have systematically murdered each other’s spirits with their actions, The Gordons are suffering something akin to what God’s people experience in this week’s readings. In the verses leading up to the first reading from Ezekiel, their long captivity having “killed” their spirits, we hear the Israelites cry out to God, "Our bones are dried up, our hope is lost, and we are cut off." They have become the living dead. The reading from Romans takes up this imagery, but rather than talking about physical imprisonment, Paul is referring to the soul crushing captivity of sin that leaves the body in motion but the spirit in the tomb."

And it’s not just irreligious people like the Gordons  who are susceptible to this state of being. As Fr. Philip Neri Powell, OP points out in his homily for this week, there are plenty of Catholic Zombies walking amongst us! “Otherwise normal looking, normal sounding Catholics who shamble around in their living bodies without a living spirit. What animates them, what gives them the appearance of being alive is uncertain. What is certain is that they are truly dead, and that their bodies are a walking grave. What can be done for these poor spiritless creatures? They must be freed from what binds them to the grave; freed from the walking death of sin… The Catholic Zombie virus is deadly. It can kill the spirit of Christ in us and leave us to walk among the living and the dead. The best treatment is prevention. Personal prayer, the sacraments, good works, and holy reading. But none of these are effective without a firm belief in the Christ, a willingness to obey his commands, and the good habit of hoping upon the resurrection. If you are dead inside, take heart, b/c the Lord has promised, “O my people, I will open your graves and have you rise from them. . . I will put my spirit in you that you may live. . .thus you shall know that I am the LORD. I have promised, and I will do it, says the LORD.”

So the next time you’re at mass, take care, because you too may be walking with a zombie. Just make sure the zombie isn’t you. 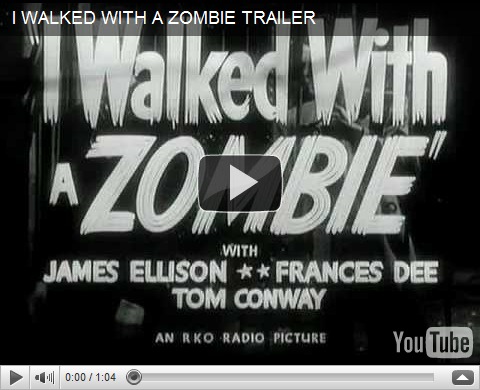 I was sure you were going here.

No, but after watching that, I wish I had.

Great as usual. And gack! I go away for a week or so as finals approach and, lo! You've posted more that I can read in one sitting! I'm llokng forward to reading the unexpected largess.

Well, it's hard to go wrong with Val Lewton films. They're all great. And I'm glad you like the plethora of posts. I'll try not to slack off now that Lent's over.

BLOGS THAT MAKE MORE SENSE THAN MINE