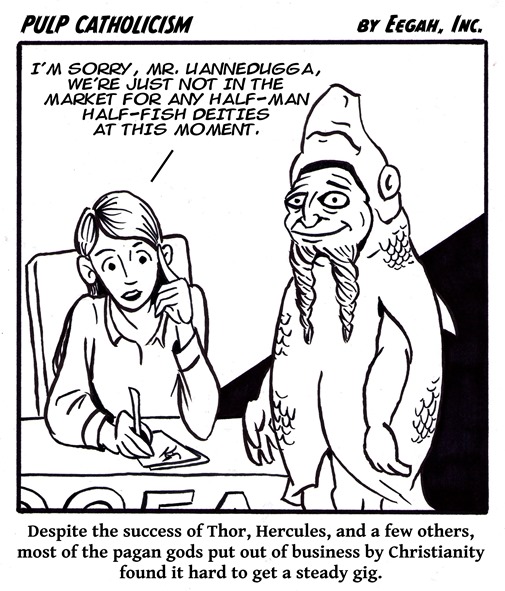 The Merovingian kings of the Franks were descended from Merovech, who walked out of the sea to rule them. His descendant, King Clovis, was baptized into the Nicean (orthodox) faith. Clovis' baptism is shown smack in the middle of the facade of Notre Dame in Paris. The idea is that the pagan came out of the water to rule, but Clovis went into the water to rule way better. Too bad the fish-man progenitor isn't in the facade!!

If they ever start a game show where the answers are based entirely on ancient studies, I call dibs on having you on my team :)

I'd totally be on your team if you designed the uniforms!

The pagan god who gets the best gigs seems to be Wotan, since he shows up in Neil Gaiman and Jim Butcher. It puzzles me, since he's such a jerk in Wagner. Maybe eye patches are cool? What do you think?

It's probably a lot easier to make the thunderers interesting than it is the gods of wheat and stuff like that. Plus they have all the cool names. Not too many metal bands are going to name themselves after the god of vegetation. "Ladies and gentlemen... FREEEEEEY!" It just doesn't work.