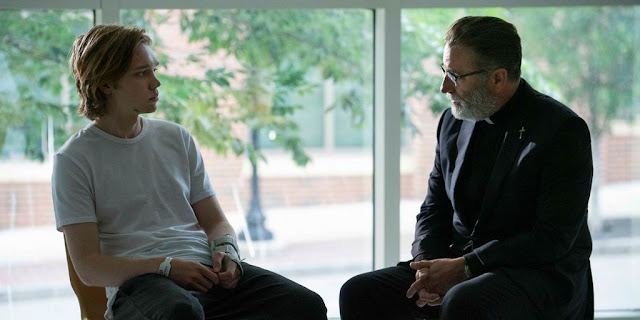 “If you suffer from schizophrenia, don’t worry, you’re not alone.” Sometimes it’s hard to tell on the Internet, but chances are that little zinger someone made in an online discussion group dedicated to mental health issues was typed with tongue very much in cheek. Even if that’s not the case, though, it’s certainly the sort of wry matter-of-fact attitude the lead character in the new drama, Words on Bathroom Walls, takes towards his own troubled mind.

That character is teenager Adam Petrazelli (Charlie Plummer), who as the film begins is being given one last chance to graduate. Having been kicked out of his previous school following a physical altercation, Adam has been conditionally enrolled into a private Catholic academy. However, as the nun in charge makes abundantly clear, there are two caveats to his acceptance. There can be no more incidents of violence, and Adam must agree to religiously (so to speak) adhere to the new experimental medical regiment prescribed for his schizophrenia. Renege on either of these conditions and Adam is out.

This does not go over well with the paranoid voices in Adam’s head, manifested in the movie by a trio of actors who continuously follow Adam around and offer him unsolicited advice. After all, should the new treatment work, Adam’s three imaginary guardians would cease to exist. And if that were to happen, who would keep Adam safe from all those people so obviously out to get him, especially his relatively new stepfather whom Adam is convinced wants him out of the house forever.

Despite such a somber setup, the first half of Words on Bathroom Walls is almost lighthearted. Chalk that up to a decent script and Plummer’s excellent performance. His Adam has a rather bemused acceptance of his schizophrenia and, when he’s not hallucinating, a certain charm in his manner. And when he does have his bad moments, Adam finds an unlikely non-violent outlet for his grievances. Though not a Catholic himself, or really a believer at all, Adam finds some measure of comfort in griping to the school’s resident priest, Father Patrick (Andy Garcia). Despite decades of bad press, it seems the collar is still a beacon to those looking for soulful advice.

Against all of Adam’s worst expectations, the new treatment appears to be working, so much so that he even manages to form a budding relationship with his new math tutor, Maya (Taylor Russell). Here the film takes a brief detour into meet-cute rom-com territory as the two teens get to know each other, though Adam hides his illness and Maya has secrets of her own. Sadly, however, the movie’s main concern is an exploration of an actual illness, and in real life some things don’t just go away or stay hidden.

As Ronald Pies, MD writes at WebMD, schizophrenia “is not caused by bad parenting, ‘cold’ or over-involved mothers, or any other known psychological factor. Rather, schizophrenia probably stems from a combination of genetic factors, biochemical abnormalities in the brain and perhaps very early damage to the developing fetus.” For now, schizophrenia is something that just is, and it brings with it a lifelong struggle which can take a toll on everyone it touches. “Hope disappears,” notes Austin Mardon at Catholic Online, “The dreams that every mother has for her child of education, career, marriage, and children can seem to be at an end. Hope and faith can be casualties.”

They don’t have to be, though, and this is where Words on Bathroom Walls shines. While the film, like its main character, strives for a happy ending, its wise enough to know such a moment can be fleeting. But even as the movie accepts the inescapability of the illness it portrays, it also understands that with the right support and love, be it from family, friends, or even priests, its burdens can be borne. Hope and faith can survive.
Posted by EegahInc at Friday, August 21, 2020