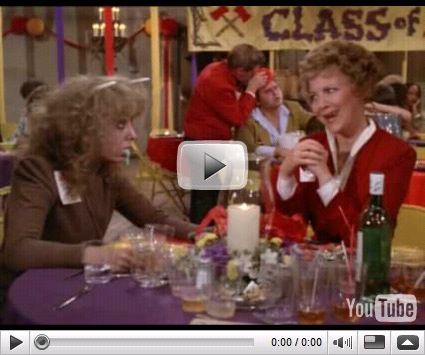 “Cum dilectione hominum et odio vitiorum”, literally “'With love for mankind and hatred of sins”, but usually tossed around these days as “Hate the sin, love the sinner”. That old phrase from St. Augustine is what comes to mind when I see this scene (my favorite actually) from National Lampoon’s Class Reunion (1982). I just find the response to poor possessed Delores here so darn charitable. “Charity is the theological virtue by which we love God above all things for his own sake, and our neighbor as ourselves for the love of God.” says the Catechism. “Charity is superior to all the virtues. It is the first of the theological virtues… The fruits of charity are joy, peace, and mercy; charity demands beneficence and fraternal correction; it is benevolence; it fosters reciprocity and remains disinterested and generous; it is friendship and communion.”

Now there may be someone out there who thinks just because Delores sold her soul to Satan, grew horns, and dribbled some pea soup, that we could bypass the charitable response in this instance if we felt so inclined. Don’t you believe it. As Our Sunday Visitor's Catholic Encyclopedia reminds us, we Catholics don’t do situational ethics. “Because the Christian ethic binds in conscience, it requires that moral agents act in a certain way. Situation ethics does not recognize there to be a powerful enough authority to assert that human beings act in accordance with the dictates of a properly formed conscience.” Christianity, on the other hand, recognizes that authority, in spades! So be sure to remember that the next time your local hellspawn comes around. And who knows, every now and then, just like we see in this clip, your response to them might just get some surprising results.

And of course, Aquinas correctly teaches that "charity is the form of virtue." This is similar but not identical to the CCC's statement that "charity is superior to all the virtues." Just as God loves us to our best possible end, so too the nature of the moral obligation to love is that our love for others must be to their best end, even to the extent of sacrificing our own end for that.

Yes, truly, charity is the form of virtue... and just occasionally, the best form of charity is a pump action twelve-gauge with a full load of magnum double-aught, solid silver, with a holly chaser.

Smiter, who is your bishop, really?

Eegah, you're making me worry. My 20th reunion is in July. I guess I need to brush up on my charitable comments. (No, Smiter, I am NOT buying a shotgun!)

PaperSmyth, if you were to buy a shotgun for your 20th reunion, I would worry... unless you had graduated from Zombie High! :)

And my bishop is St. Martin of Tours. I am one of the many former unbelievers he converted by chopping down the sacred groves and daring the idols to stop him, and I learned those lessons very well.

I have a copy of 1987's Zombie High starring Virginia Madsen. Is that enough to get me a dispensation to attend my next reunion locked and loaded?

Eegah, it sure is as far as I'm concerned! You can wear the cover art in your hatband like a Press card. 'Course, I don't believe Zombie High is set in my jurisdiction, so you may need a second opinion from one of my archidiaconal peers...
- Smiter the Archdeacon

I'm pretty sure there will be numerous people there loaded, but not in that sense. I'm not planning on joining them.
One of my children is named after the good Bishop. And my dad really is a deacon. Since he lives in the town in question... maybe he'll lend me his shotgun? (Joking.)
Thanks, guys. It's been a searing day here at the paper burning factory. ;) I really needed the laughs.

Eegah - click here to see that I've nominated your blog at the Blogger's Choice Awards for Best Religious blog. I know, it's not the Academy Awards...it's actually better!

Here's a Catholic blogosphere B-movie sighting: Kathy Shaidle of Five Feet of Fury is complaining about a bad copy of Driller Killer.

Thanks, LarryD, that was most appreciated.