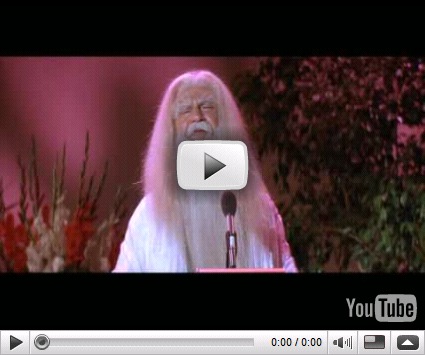 While perusing through the works of Charles Band, the producer of this week’s epic Spellcaster, I couldn’t help but be reminded of this scene from 1981’s S.O.B. in which everyone’s favorite F-Trooper Larry Storch delivers a eulogy only Tinseltown could appreciate. I thought of it because, except for perhaps the part about grossing $200 million off a single film, I imagine Band’s own eulogy will run something along the lines of this one. How so, you ask? Well, it’s the litany of questionable movie titles the overzealous guru rolls off during his tribute. It’s eerily similar to some of the very real titles you’ll find amongst the hundreds of films Band has been involved with over the past three decades, a few of which we’ve provided below. (And remember, be sure to use Larry Storch’s guru voice as you read them.)

As you can see, reading the titles of a Band film can sometimes be just as entertaining as watching them. (Sometimes, more so.) But that’s on purpose. In an interview from a few years back, Band noted, “a strong title, of course, has always been important and the idea of combining two words or really putting a lot of thought into the title before a picture is even written. Corman did it too so I can't claim that was my idea but I certainly focused on that a lot. Most of the films that I made, that I conceived, that I was very involved with and in some cases directed, definitely started with the title and usually a piece of artwork that made sense. Then I would work back to the script and the story and make the movie. So that little formula has worked for me.” And it does work! I’ve never even heard of The Horrible Dr. Bones until now, and though most reviews say you should eat glass instead of watching it, I still kind of want to find a copy just because it has the freakin’ name The Horrible Dr. Bones!

Now, when coming up with a good title for anything, author and speaker Dave Taylor suggests you should “focus on the single most important concept, idea, product, vendor or topic… and then ensure that appears in the title too and you'll be well on your way to creating good titles.” Christians have always had an innate sense of this principle, however, when trying to come up with titles for an omnipresent, omnipotent God, it’s been kind of hard to narrow the focus down to a single most important concept. So hard, in fact, that Holy scripture alone contains over 100 names for Jesus. By 1953, Arthur C. Clarke had bumped the total up to nine billion.

Fortunately, as Catholics, we don’t have to worry about trying to figure out just the right one. Sometime back in the fifteenth century, the Litany of the Holy Name of Jesus first made its appearance and it’s been a popular devotion ever since. Based on a number of the names which appear in scripture, this call-and-response petition to God contains the following titles for Jesus:

Lord – Christ - God the Father of Heaven - God the Son, Redeemer of the world - God the Holy Spirit - Holy Trinity, one God - Jesus, Son of the living God - splendor of the Father - brightness of eternal light -King of glory - sun of justice - Son of the Virgin Mary - most amiable - most admirable - the mighty God - Father of the world to come - angel of great counsel - most powerful - most patient - most obedient - meek and humble of heart - lover of chastity - lover of us - God of peace - author of life - example of virtues - zealous lover of souls - our God - our refuge - father of the poor - treasure of the faithful - good Shepherd - true light - eternal wisdom - infinite goodness - our way and our life - joy of Angels - King of the Patriarchs - Master of the Apostles - teacher of the Evangelists - strength of Martyrs - light of Confessors - purity of Virgins - crown of Saints – Lamb of God.

Much like Taylor advises, each of these titles concentrates on a specific important aspect of God’s nature, and each one is worthy of meditation. On occasion I pray the Litany of The Holy Name during adoration, waiting to see which one or two titles stick in my mind, and then contemplate on those. I’ve yet to come away without some small insight. Of course, it’s an old devotion, and probably not to everyone’s style, but if you’re ever stuck in a rut prayer-wise, you might want to give a Litany (this or any other) a try. You’re not likely to come away disappointed.

That litany is one of my favorites, although sometimes I think on "Lover of Us" and then on any other one and wonder. Just... wonder.

By comparison "Laserblast" seems quite lame, what was Charles Band thinking?

I think I'll bring that Litany along to adoration next time, those are just beautiful, "Most Patient" stands out for me.

I'm not a "thou must use the old devotions" kind of guy, but I'm a little disappointed at how few people at my parish find value with them. Oh well, I'll keep pimping them until I get a few converts.

As for Laserblast, in the article I pulled that quote from, Band cites Laserblast as the first time he put some effort into a catchy title. Worked for me. Based on the title and the publicity stills, I was sure that was going to be as good as Star Wars.

Sorority Babes in the Slimeball Bowl-O-Rama was one of my baby brother's favorite films as a very young teenager. He watched it with a friend. (Although he thought it was "Sleazeball". He stands corrected.)

My favorite B-movie was "Surf Nazis Must Die."

Wow, I haven't seen Surf Nazis in years, I may have to dig that one up again. Another one I originally picked up just on the title alone.