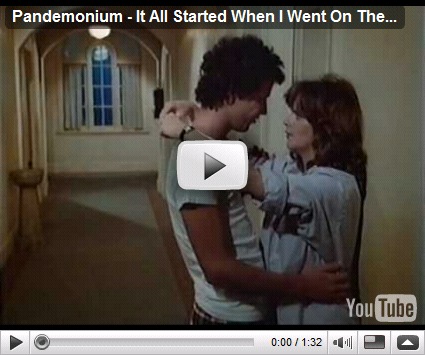 Yes, I know I just posted a clip from 1982’s Pandemonium, but really, you can never have enough Pandemonium. This scene is a take-off on the old slasher movie set-up where the promiscuous teens separate and wander off in order to have pre-marital sex. And if you read our review of Student Bodies, then you know exactly how that’s going to turn out. (Don’t worry, there’s no nudity in the clip, although there is some gratuitous goosing.) But that’s not why this clip is here. What we’re interested in (besides the baloney line, which is one of my all time favorites) is Carol Kane’s throwaway quip about the pill at the end of the scene.

Oh, that wacky birth control and its side effects! Even if you don’t buy into the potential threats of blood clots and ovarian cysts, you have to at least be concerned about the recent studies which have shown a possible link between using birth control, gaining weight, and getting irritable bowel syndrome. Forget scaring’em with cancer, if Rome wants the ladies to lay off birth control, they should just run a campaign explaining how the pill will cause them to become morbidly obese and develop uncontrollable explosive diarrhea. Then stand back and watch the sales plummet.

Well, it’s what I would do anyway, but I doubt the Vatican is going to stoop down to my level anytime soon. And there’s no reason they should. Even though science is making the Church’s position on birth control look pretty good right now, that’s not the hook Christianity hangs it hat on when it comes to things like the pill. After all, given a few more generations (assuming they’re not all aborted or contracepted out of existence), science is likely to chip away at most of the ill effects of the pill. And for those bad side effects the scientists can’t eradicate, well, they’ll probably just come up with a pill that makes you happy enough to forget about them.

No, as nice as it is when science backs her up, the fact is the Church’s argument against birth control has always been a moral and ethical one. Facing criticism over some statements he had made about condoms, the late Cardinal Alfonso López Trujillo wrote in a 2003 reflection entitled Family Values vs. Safe Sex, “In order to stress that the level of protection provided by the condom against HIV/AIDS and STD’s is not sufficient, I also referred to a certain permeability suggested by the results of scientific investigations. Such concern also has to be given attention considering that the AIDS virus is 450 times smaller than the sperm cell – in addition to other risks brought about by different factors in the condom’s structure and in its actual usage… Condoms may even be one of the main reasons for the spread of HIV/AIDS. Apart from the possibility of condoms being faulty or wrongly used they contribute to the breaking down of self-control and mutual respect… (Notice the shifting of the argument from scientific to moral grounds?) Rather than focusing merely on the aspects dealt with by the expert investigators, one has to keep in mind above all the integral good of the person, in line with the proper moral orientation, which will be necessary to provide total protection against the spread of the pandemic. With or without the threat of HIV/AIDS and STD’s, the Church has always called for education in chastity, premarital abstinence and marital fidelity, which are authentic expressions of human sexuality.” Always.

Oh, and if all that sounds eerily familiar to the words Pope Benedict XVI used when recently discussing condom usage in Africa, don’t be surprised. Reporting on the election of Cardinal Ratzinger to the pontificate, the Heartland Journal had this to say. “The cardinals who seek Cardinal Ratzinger’s election are the most preoccupied. The most active is Cardinal Lopez Trujillo”. I’m pretty sure they knew each other.

"you have to at least be concerned about the recent studies which have shown a possible link between using birth control, gaining weight, and getting irritable bowel syndrome."

Trujillo lost a PR war as the Church usually does as most of media will hear her in the worst possible light. They locked onto a an admittedly correct fact--that the virus transmission depends on fluid transmission, meaning that if the semen doesn't get through the barrier, then the virus doesn't get through no matter how much smaller it is--and now have have this one only one bit of Trujillo's point on a keyboard macro along with "former Hitler Youth Benedict XVI" for easy typing.

Irritating, isn't it? One slip and they act like every word Trujillo said is invalid. Funny how that never works in reverse when they make the error.

Does this mean a review of Pandemonium is forthcoming.

Another from my childhood...

You did request that way back didn't you? I finally found a copy so I don't why not. I'll put it in line.