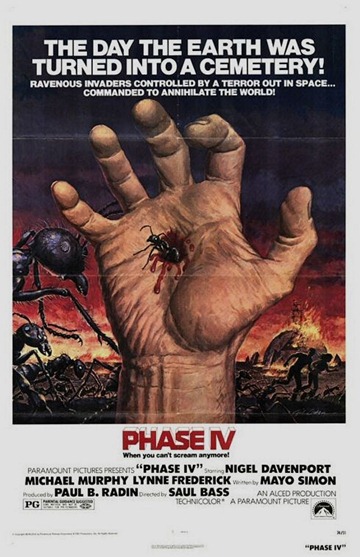 “Saul Bass had a fascinating career as an animator and as designer of title sequences for a number of notable films, including Psycho, Vertigo, Anatomy Of A Murder and Seconds. However, Phase IV was his only credit as director of a feature film. A visually inventive science-fiction story, Phase IV concerns a group of research scientists working in the Arizona desert who find themselves confronted by an Army of super-intelligent mutant ants. The results are more intelligent than the description would lead you to believe, and Nigel Davenport and Michael Murphy turn in good performances as the embattled men of science.” ~ Rovi’s Allmovie Guide

In 1971, the Academy Award for best feature length documentary went to The Hellstrom Chronicle, a film which utilized groundbreaking macrophotography to document the epic struggles which occur every day in the insect world. But as fantastic as the imagery was (and still is to this day actually), what really turned the Hellstrom Chronicle into a cult classic was the script penned by legendary screenwriter David Seltzer (The Omen, Prophecy). Rather than go with the staid voiceover so typical of other documentaries, Seltzer instead had the film narrated by a fictional near-manic entomologist named Dr. Nils Hellstrom who bleakly informed the audience that he was morally compelled to present the results of his years of study of insects, despite the ridicule and harm it would inevitably bring to his career. You see, after decades of observing the highly organized societies established by insects, Hellstrom had come to the inevitable conclusion that the greatest threat to humanity wasn’t nuclear war or environmental disaster, but the barely noticed bugs crawling beneath our feet. In short, if the insects were ever to declare war on mankind… mankind was hosed.

And that’s basically the idea behind Phase IV, which begins with a vague, undefined event in space that has a profound affect on the intelligence of the ant population in the American desert.The change goes relatively unnoticed by the scientific community for awhile, but after various species of ants which would normally be hostile too one another begin to work together and make things hard for some of the local ranchers, the government takes notice and decides to send in a pair of scientists to investigate what is going on. Now, if this were any other old bug invasion flick, this would be the point at which the movie became nothing more than a series of scenes involving people fighting an advancing horde of creepy crawly things. But that’s not how Phase IV creeps and crawls. You see, while the poster (above) may have promised carnage, what the movie actually delivers is a back and forth chess match wherein the men study and test the ants, and the ants in turn do the same to the men, may the smartest minds win.

And for my tastes, that’s what makes Phase IV so darn good. Take for instance the sequence which begins with the ants chewing through some of the generator wires in an attempt to cripple the scientists’ computer systems. The head scientist responds by coating the landscape with a new form of insecticide to prevent the ants from coming in too close. After an initial retreat, the ants send back scouts to retrieve some of the poison so that the queen can analyze it and produce offspring resistant to the toxins. Once enough of the new eggs have hatched, the ants then begin to construct… Okay, I know it sounds a lot less exciting than watching ants crawl all over Suzanne Somers, and in lesser hands, maybe it would be. But the combination of Saul Bass’ direction, Dick Bush’s cinematography, and Desmond Briscoe’s somber score produces something special. Rather than being a snooze fest, the scene I just described actually becomes mesmerizing. For almost five full minutes the camera follows a series of worker ants as one by one they transport a single piece of the dried poison through their tunnels, each wrenching the deadly package from the clenched mandibles of its dead predecessor, each knowing they too will perish before the task is complete. It’s all shot in glorious macro close-up and plays out to the strains of a mournful adagio that adds just the right touch of pathos to the workers’ sacrifice. On paper, it’s just a few ants crawling and dying. Onscreen, it’s practically impossible to turn away from.

Look, I enjoy watching William Shatner over emote to tarantulas as much as the next guy, but Phase IV just has so much more going for it in the ideas department than most of the other bug movies combined. While it never dwells overlong on any one topic, it still manages to touch on everything from game theory to class warfare to man’s place in the universe. Plus, Phase IV does make you wonder, even if just a little, if something like this scenario could be how humanity finally meets its end. As an inveterate sci-fi fan, I realize the honor of mankind’s destruction usually falls to asteroid collisions, global pandemics, alien invasions, and things like that, but as The Hellstrom Chronicle (phony baloney though it was) so duly pointed out, insects outnumber us and are far more organized.  So why should an apocalypse by ants be out of the question? It’s as good a guess as any.

Now, of course, someone out there is probably thinking, “Hey, what about the Bible? Doesn’t it tell us exactly how the world will end?” Well, kind of. Remember, this week’s first reading only tells us how the world’s grand finale WILL NOT occur, “that the waters shall never again become a flood to destroy all mortal beings.” But notice that it never actually gets around to saying how it WILL. And as for the verses we find scattered throughout the rest of scripture that do address the end times, let’s just say they can be a little vague. Oh sure, it’s pretty clear that at the very final moment there’ll be a big blow-out between Jesus, Satan, and their two respective forces. As the Catechism explains it, “On Judgment Day at the end of the world, Christ will come in glory to achieve the definitive triumph of good over evil which, like the wheat and the tares, have grown up together in the course of history.” But as for the events leading up to the big finish, that’s a bit more sketchy.

So, assuming something obvious like a militant uprising of ants doesn’t occur, how will we know the end is approaching. Well, skipping over all that pre-tribulation rapture nonsense that’s been all the rage amongst some evangelical protestants for the past couple of centuries (another post for another time), about all we can really say the Bible tells us about the end times is that there will be wars and rumors of wars, some natural disasters, and that the Church will be persecuted, undergoing a trial that will shake the faith of many believers. Which, when you stop to think about it, pretty much sounds like most any time in Church history. Which is sort of the point. As Jesus tells us in this week’s gospel, "THIS is the time of fulfillment. The kingdom of God is at hand. Repent, and believe in the gospel." You see, its been the end times since Jesus ascended into Heaven some 2,000+ years ago, and it could remain the end times for who knows how long. "Of that day and hour no one knows” Jesus once said, “neither the angels of heaven nor the Son, but the Father alone."

So, what to do until the final cosmic throwdown actually does role around? Well, these end times, the Catechism reminds us, are “a time still marked by ‘distress’… a time of waiting and watching”, but also, “according to the Lord, the present time is the time of the Spirit and of witness.” Which means, basically, that rather than spend too much time sitting around fretting about the details of Armageddon, we should just get down to the daily tasks of repenting, believing, and witnessing which God has given us. And you know who already understands the importance of taking care of what needs to be taken care of, don’t you? The dang blasted ants. That’s why the Bible tells us in Proverbs to “go to the ant, O sluggard, study her ways and learn wisdom.” Come on, folks. Get busy. Don’t let the ants prove themselves smarter than us. 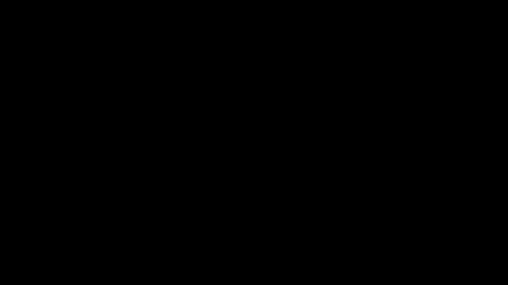 Posted by EegahInc at Wednesday, February 29, 2012

I watched this as a kid and was permanently creeped out - I can remember that the ending was horribly uncomforting, even worse than Planet of the Apes moves. But wasn't there a Frederic Brown short story with a similar premise: that a man was tortured and tested by a mysterious alien, only to find out at the end that an ant was his nemesis?

"I watched this as a kid and was permanently creeped out"

Me too. I remember this came on the first night I had ever been left at home alone and I watched it followed by an episode of the Twilight Zone. Serious heebie jeebies.

I'm not familiar with the Brown story, I'll have to find a copy.

Oh sure, Arachnophobia is better if you're talking about the acting... and probably the writing... and also the production values... and the special effects go without saying... and the cinematography... and the music... and...

"Kingdom of the Spiders" was what I watched the first night I was ever left home alone. **shudders** I appreciate its camp value only as an adult....

Ever heard of Werbers' Ants? It was big in Europe. I bet the author knows this movie, 'cause it has a fairly disturbing ending, too. One of the undeveloped ideas in it is that global warming is going to change a lot of bug habitats & aggressive tropical species coming North will be A Bad Thing.
book link here:http://en.wikipedia.org/wiki/Empire_of_the_Ants_%281991_novel%29

I'll definitely have to pick up Werber's Empire Of The Ants. Maybe it'll help erase the Bert I. Gordon film of the same name from my consciousness.