So it’s Halloween season and you’re in the mood to settle in with some good religious themed genre movies, but you really can’t stand the thought of watching one more flick about exorcism or miserable priests on the verge of losing their faith? Well, not to worry, you’ve come to the right place, because all throughout October the B-Movie Catechism is throwing a holy horrors spookfest highlighting films with religious content, but nary an exorcism or dispirited priest in sight (well, maybe one or two, they’re kind of hard to avoid in movies). To get things started we have… 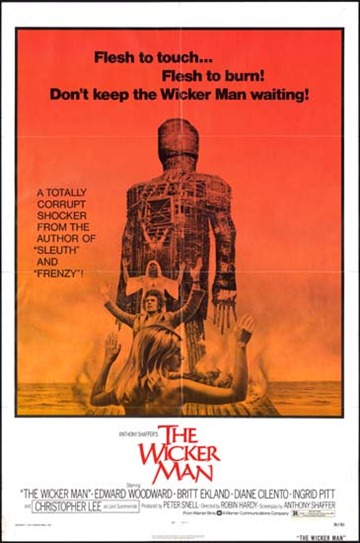 “A righteous police officer investigating the disappearance of a young girl comes into conflict with the unusual residents of a secluded Scottish isle in this unsettling, intelligent chiller. Brought to the island of Summerisle by an anonymous letter, Edward Woodward's constable is surprised to discover that the island's population suspiciously denies the missing girl's very existence. Even more shocking, at least to the traditionally pious law office, the island is ruled by a libertarian society organized around pagan rituals. Repelled by the open acceptance of sexuality, nature worship, and even witchcraft, the officer takes an antagonistic attitude towards the people and their leader, an eccentric but charming English lord (Christopher Lee). The officer's unease intensifies as he continues his investigation, slowly coming to fear that the girl's disappearance may be linked in a particularly horrifying manner to an upcoming public festival. Anthony Shaffer's meticulously crafted screenplay creates a thoroughly convincing alternative society, building tension through slow discovery and indirect suggestion and making the terrifying climax all the more effective. Performances are also perfectly tuned, with Woodward suitably priggish as the investigator and horror icon Lee delivering one of his most accomplished performances as Lord Summerisle. Little noticed during its original theatrical run due to studio edits and a limited release, the film's intelligence and uncanny tone has since attracted a devoted cult following.” – Rovi’s AllMovie Guide

“Animals are fine, but their acceptability is limited. A little child is even better, but not nearly as effective as the right kind of adult.” – Lord Summerisle

“You shall not offer any of your offspring for immolation to Molech, thus profaning the name of your God. I am the LORD.” – Leviticus 18:21

As you can tell by the use of the word ‘intelligent’ in the above synopsis, we are most definitely not talking about the laughable reimagining of The Wicker Man from 2006 in which the only frightening thing to be found was Nick Cage over-emoting while dressed in a bear suit. No, we’re talking about the 1973 original, a movie that for whatever reason is usually lumped into the supernatural horror category, but is actually more of a well written and acted mystery with a great soundtrack and a somewhat disturbing ending. I suppose it gets classified as horror because it stars Christopher Lee and deals with an entire community which has returned to a form of pagan worship, a thought that was probably still kind of creepy back in the early 70s. Of course, these days, you can find pagan wannabes in just about every town (usually in small shops selling ankhs, incense, and COEXIST bumper stickers), so that part of the movie isn’t as shocking as it likely once was. But that’s okay, because shocks aren’t really what The Wicker Man is all about anyway. 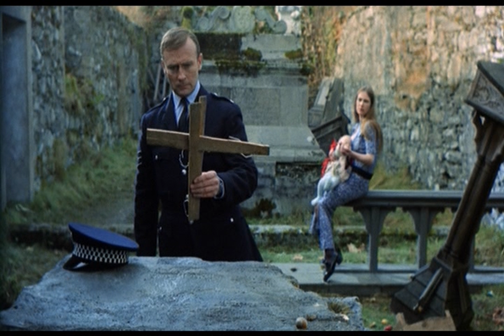 What really drives the narrative in the film, and therefore makes it perfect for kicking off our holy horrors film festival, is the conflict between the beliefs of the Christian policeman (possibly Catholic, probably conservative Anglican) and the pagan-esque townspeople. The script smartly plays everything evenhanded, simply presenting each person’s beliefs as they are with no editorial and leaving it up to the viewer to decide which side is preferable (at least until the climax smacks you in the face and makes the choice obvious to all but a few select lunatics). It’s true that the pagans are depicted as mostly genial while the Christian could use a bit more ‘joy of the Lord’, but you have to keep in mind that the Christian is the one alone in alien territory being confronting with things hostile to his belief system. For instance, when Sergeant Howie leaves the Green Man Inn to escape the lecherous song being sung about the landlord’s daughter (a sing-along which her own father is taking part in by the way), he runs smack dab into a park full of people in various states of copulation. Who can say that their own reaction to such a situation would be any less prudish than the Sergeant’s, so it’s kind of hard to cast any stones. Plus the townspeople spend a good deal of their time actively trying to get the Christian to act against his beliefs, not exactly what you’d call ecumenical behavior on their part. And finally there is the small fact that the villagers appear to be blatantly impeding Howie’s investigation into what could be a murder. Christian or not, that’s bound to cause you to act like you have a stick up your butt.

But forget all that stuff until your second viewing, because despite the excellent acting, the haunting soundtrack, and the interesting inter-faith back and forth, it is the conclusion of the film that usually sticks with most people the first time they watch The Wicker Man. And the inevitability of what happens in the final scene is bound to leave Christians with plenty of food for thought as the end credits roll, especially considering that, as noted above, people like the residents of Summerisle appear to be growing in number these days. Are we, like Sergeant Howie, prepared to uphold our beliefs under society’s (or at least government’s) slow but steady trickle away from traditional Christianity and towards a smorgasbord of neo-paganistic spiritualties and good old fashioned secularism? How far are we willing to take it? Bishop Richard J. Malone of Buffalo, in his recent homily given on the day of his installation, believes the time has come to embrace the concept of the modern martyr. 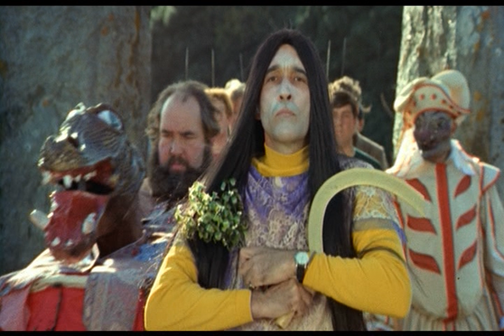 “A martyr is… in the most literal sense a witness.” Bishop Malone said, “And a witness is anyone whose discipleship is so authentic, so deep, so uncompromising, so credible that she or he is ready and willing, with God's grace, to give all, surrender all, to Christ and the truth he has revealed ... And to do so in the face of fear, loss, scorn, rejection, suffering, even death. It is total self-giving in response to Christ’s love poured out for us from the Cross.” The Bishop’s definition of martyrs is spot on, of course, but is he really asking all of us Christians to get ready to die? Does he think we live in China or Nigeria or someplace like that? Well, no, not yet. And he doesn’t think the streets are crawling with neo-pagans dressed in animal masks and women’s clothing looking to do nasty things to us either (for right now they’re content to use the Congress and the courts). Rather, His excellency is talking about a new form of martyrdom.

“For some, like [Saint] Lawrence” the Bishop continued, “the witness's surrender rises to a dramatic climax, like death on a grill. For most of us, though, our witness is a matter of persevering commitment to Christ and the Gospel, a daily dying to self, again and again, in large things and small. And this can be attempted in a wholesome, healthy and life-giving way only with profound hope, and even, paradoxically, real joy… We need the martyrs' conviction, courage, tenacity and selflessness--and hope-- to stand up in our increasingly relativistic society in defense of these truths and values so threatened in our time.” So what the Bishop is getting at is that while we may not have to worry about immolation or other such fates, if we stand by our convictions in the coming years, we may very well have to suffer through ridicule, isolation, loss of status, limited opportunities, and so on. Sure, it may not be as flashy as facing The Wicker Man, but hey, you take the martyrdom you’re given.

Years before I became Catholic, my brother and I were trolling the local video store in search of a decent looking horror movie. I picked up this one, but my brother scoffed at it and we ended up coming home with "Basket Case" or something.

Now, as someone fully in communion with Holy Mother Church, and living over here on this side of a post-Christian nation, I may have a different response from a second viewing. Now just to convince Ken to sit through it again.

The remake. You mean you didn't find removing religion from the film and replacing it with a feminist fantasy war on patriarchal society engrossing? Well, don't worry, nobody else did either. Wow did that stink.

I could not agree more. What a rotten egg in the basket of remakes.

I never would have considered watching this movie, but ... rats! I suppose I'm going to have to add this to my "to watch" list. :-)

Zack, I could rag on the remake all day. I've never seen one that so missed the point of the original. Augh!

Julie, as Cari mentioned, there are a couple of racy scenes in this one, but in this case I think they actually serve the story and advance Howie's character. Still, just thought I'd give a heads up.

Racy scenes I'm use to. It is violence I usually avoid. Though this review also served as a "blast to the past" as my husband and I suddenly began remembering all the "cult" and "occult" movies that popped up in the 1970s. So this is probably much like the ones we remembered.

The Wicker Man is pretty much violence free, so you might like this one. Or maybe not. Either way, it might make a good topic for the Good Story podcast (hint hint, wink wink, nod nod).