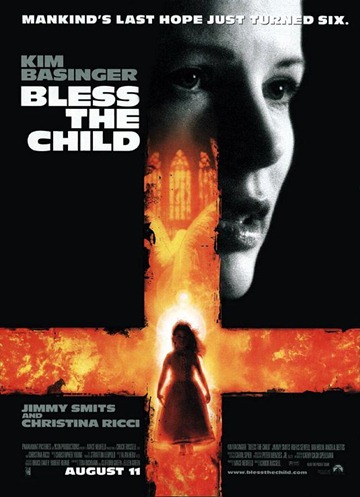 “In this supernatural horror story, Jenna (Angela Bettis), an unstable young woman, gives birth to a girl named Cody who proves to be autistic; unable to care for her properly, she turns Cody over to her sister, psychiatric nurse Maggie O'Connell (Kim Basinger). Maggie raises Cody as her own, but when the child (now played by Holliston Coleman) turns six, Jenna and her new husband Eric (Rufus Sewell) forcibly take back the child. Maggie believes Jenna and Eric are not fit parents, but when she takes the matter up with detective John Travis (Jimmy Smits), they discover that a number of children born on the same day as Cody have also been abducted recently. Even worse, it seems that Cody may now be in the hands of Satanists who, in accordance with Biblical prophecy, believe the little girl may be mankind's last line of defense against ultimate evil. Based on a novel by Cathy Cash Spellman, Bless the Child also stars Christina Ricci and Ian Holm.” – rovi’s AllMovie Guide

“Then the devil took him to the holy city, and made him stand on the parapet of the temple, 6and said to him, “If you are the Son of God, throw yourself down. For it is written: ‘He will command his angels concerning you’ and ‘with their hands they will support you, lest you dash your foot against a stone.” – Matthew 4:5,6 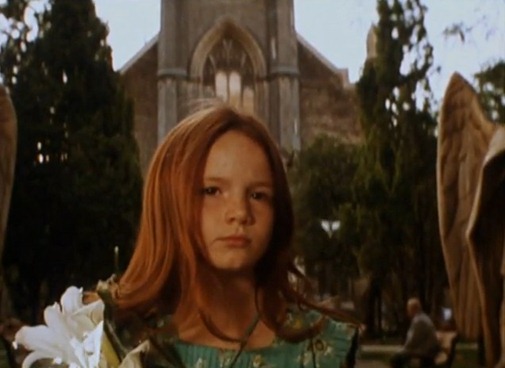 You know, while there may be a whole lot of Catholics using contraceptives these days, Satan, whom you think would be a fan, doesn’t seem to be too fond of the things. Well, that’s if the movies are any indication, because it sure seems like every time Old Scratch makes a booty call on film, a kid shows up nine months later. Think about it. You’ve got Rosemary’s Baby, The Omen, End Of Days, 666: The Child, The Calling… well, there’s more but you get the point. So it’s kind of a nice change of pace when you run across a flick like Bless The Child where instead of the birth of yet another mewling little antichrist you get a movie about the coming of a future saint. A saint whom… a bunch of Satanists want to try and corrupt into becoming the antichrist. Hey, it’s a movie, you gotta have some conflict, right?

Actually, despite the sarcasm, it’s that very spiritual conflict which earns this movie a spot on our holy horrors film festival. You see, the film adaptation of Bless The Child pretty much guts the ‘everything but the kitchen sink’ storyline of the original novel (Egyptian goddesses, all-powerful mystical amulets, globe hopping adventurers) and condenses the narrative down to a battle for one soul as filtered through the lens of a surprisingly Catholic worldview. And I’m not just talking about the visuals. After all, a movie like Night Of The Demons 2 is set in and around a Catholic school run by nuns, but nobody would ever accuse its story of taking place in a universe operating under the tenets of even the merest Christianity, much less full blown Catholicism. Bless The Child, on the other hand, does just that. 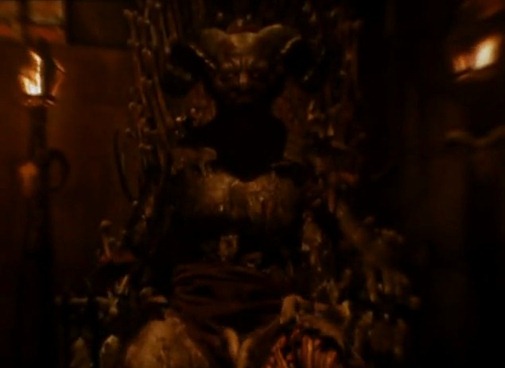 For example, in this movie God and the devil are quite real, but as pointed out in the Catechism’s section on fallen angels (CCC 391-395), Satan is not God’s equal, he’s just some punk trying to ruin things for everybody in the same way he ruined it for himself. He accomplishes this mainly in two ways. He has his demons (goofy CGI creations barely above SyFy standards) flit around and influence his followers (who are all hilariously Goths for some reason) to cause harm to others, and he tries to tempt the followers of God (even marginal ones like Kim Basinger’s lapsed Catholic & Jimmy Smits ex-seminarian) to abandon belief in God and make up their own rules. As for the other side, while there is some obligatory car chases and gunplay, the good guys mainly fight back against the forces of evil by relying on the intercession of the saints (the little girl actually receives a message directly from Mary), the help of angels (who tend to show up in the form of friendly strangers at just the right time), and lots and lots of prayer (the outcome of the entire final battle is actually affected by a group of nuns who aren’t even onsite, but rather back at the church on their knees in front of the tabernacle). Nothing major happens in the film to contradict long held Christian beliefs.

I know, right? Who would of thought Hollywood had it in them? Look, I’m not saying Bless The Child is any kind of classic (the pros at Metacritic called it one of the worst movies of the year while the user reviews put it at just above average), but just this once I’ll happily sit through stuff like underdeveloped characters (Why exactly did Smit’s character leave seminary? Why does Basinger’s character say she prefers a school that’s not too religious and yet send her niece to one run by habited nuns? In fact, how the heck did she even find a school run by habited nuns in the first place?) and nonsensical special effects (Why does a holy child have the power to spin plates with her mind? Are we in need of a patron saint of dishwashers or something?) just to finally, FINALLY, get a script written by people who paid attention during their religious education classes.

Wow. I am not fond of true horror and would normally never have watched this. I will now. Thanks for the review. Just as a reality check: Hollywood did this? Really?

Remember, I make no guarantees as to the quality of these movies, watch at your own risk. But yes, this is an actual Hollywood movie (Paramount)that shows Catholicism (the flashy side anyway) in a positive light.

Thanks for the recommendation! Yes, I do watch everything at my own risk. =)

That's a curious observation about Hollywood-Satan's aversion to contraception. Did you ever read Eve Tushnet's article on "Abortion Horror"?

I missed that article, thanks! It was good to see she brought up some B-movies like Humanoids from the Deep and It’s Alive, but there is a whole sub-genre of abortion survival horror she missed that I should really get to at some point. It's kind of disturbing though.