BMC MOVIE OF THE WEEK: THE LAST CHILD 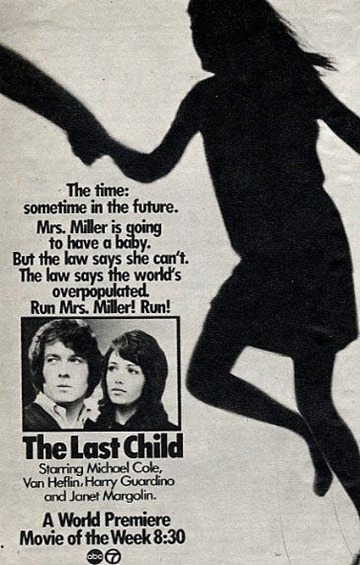 “Back before he was producing Charlie's Angels, Aaron Spelling was a major supplier of made-for-television feature films, particularly to ABC, on which this movie premiered in 1971. The Last Child takes place in America in 1994, a time in which a massive, chronic overpopulation crisis has resulted in the passage of Draconian laws, declaring that no couple can have more than one child, and that nobody over the age of 65 can receive any but the most superficial medical treatment. Michael Cole and Janet Margolin play a young married couple whose first child died; she is pregnant again, and they now find themselves hounded by the authorities when she refuses to submit to a legally mandated abortion. Chased across country by Population Control agent Edward Asner (a sinister figure in his pre-Mary Tyler Moore period), they plan to escape to Canada but find the border closed. They receive unexpected help from Van Heflin, in his final screen performance, portraying retired U.S. Senator Quincy George, who opposed the Population Control Laws. He shelters Cole and Margolin at great risk to himself, using what political clout and respect he still commands in his own state to block Asner's pursuit. They must find a means of escaping the country, however, as the authorities close in even on this momentarily safe haven.” ~ AllMovie

Sometime in the not too distant future... It’s with those ominous words that the 1971 made-for-television movie The Last Child begins. Of course, the near future the film was predicting was 1994, so I suppose you can take any warning it contains about impending dystopias with a grain of salt. Still, the story is designed to make you think, and that it does.

As with most made-for-TV movies of the time, robbed of the graphic sex and violence filling the movie screens of the early 70s, The Last Child has to rely on atmosphere to keep things interesting. In that respect, the film opens pretty strong with a scene set in a bustling airport in which a frantic woman trying to find her lost son is discovered by security guards to be pregnant with a second child. As American law forbids women to have more than one child during their lifetime, she is immediately arrested so she can undergo a forced abortion. Two men gallantly step forward to complain about the woman’s rough treatment, only to be taken into custody themselves for daring to question the law. All in all, the opening sequence does an admirable job setting up a sense of paranoia and desperation. 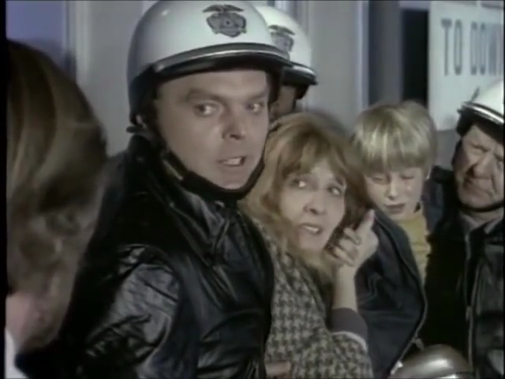 One of the men detained by the police, it turns out, also has a wife who is pregnant with a second child, their first having died only 15 days after birth. As the above synopsis indicates, it isn’t long before this young couple, The Millers, are on the run for the Canadian border with an angry Ed Asner in hot pursuit (which is actually more unnerving than it sounds). At one point, they are temporarily detained and interrogated by a doctor, leading to what is probably the eeriest scene in the film. Calmly, the physician explains how, because Mrs. Miller’s pregnancy is so far along, they will have to wait until the baby is delivered and then dispose of it with quick and efficient kindness. “Not every human being has a right to live.” he politely intones.

Now, before you start thinking The Last Child is some nightmare vision of the future (near or not) concocted by the pro-life movement, remember this was made in 1971, two years BEFORE Roe v. Wade. So what was the deal? Well, according to Michael McKenna’s book, The ABC Movie of the Week: Big Movies for the Small Screen, "The Last Child was a byproduct of a burgeoning cultural and academic point of view arguing that the planet and its in-habitants faced inevitable extinction if global population controls were not enacted. The most well known, if not infamous work, was Paul Erlich's bestselling book, The Population Bomb (1968). There were also a number of TV shows and theatrical films featuring the overpopulation theme, including a very similar ABC presentation from the show Stage 67 (1966), and feature films, such as Soylent Green (1973) and Logan's Run (1976)." 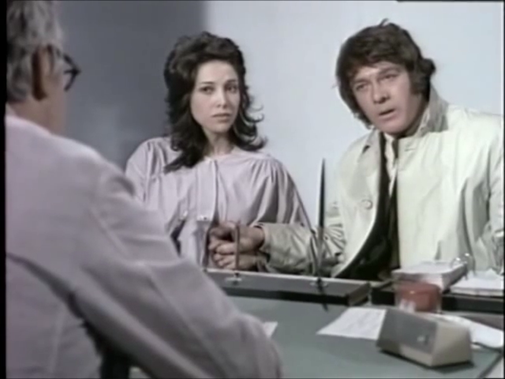 These days, Erlich’s book is finally being discredited as the junk science it is, leading those with teaching authority in the Church (as we already noted in our review of Elysium) to declare its erroneous findings a work of unmitigated evil. Back then, though, Erlich’s ideas were pretty much accepted as gospel (at least by the media) and the fears they engendered were just beginning to seep into the public consciousness. That’s why, even though the Millers are undoubtedly the heroes of The Last Child and the audience is encouraged to root for them, the film also in some ways is downright sympathetic to the population control methods employed by its fictitious police state. Just about every public scene is filmed in tight, claustrophobic medium shots and close-ups, depicting throngs of people jostling and bumping into each other. In this way, the movie makes it quite evident that the overpopulation problem in its version of 1994 is real. And the doctor that questions the Millers, while clinical in his discussion, isn’t entirely without humanity. He admits to having many sleepless nights, but does what he must for the greater good of all. "If only we had practiced planned parenthood in the past." he opines. Yes, the movie actually name drops the organization that has since turned the unnecessary industry of population control into a blood-soaked cash cow.

Which brings us to the actual here and now where the overpopulated future of The Last Child never materialized and the science which predicted it has been debunked. And yet, despite all of that, some of the population control methods the film depicted, such as limiting care for the elderly, seem uncomfortably closer to becoming a reality (yes, I understand the linked article is about nudging oldsters to voluntarily forego care rather than outright denying it to them, but this kind of crap has to start somewhere). That reality makes the movie, despite its humble made-for-television production values, quite unsettling. 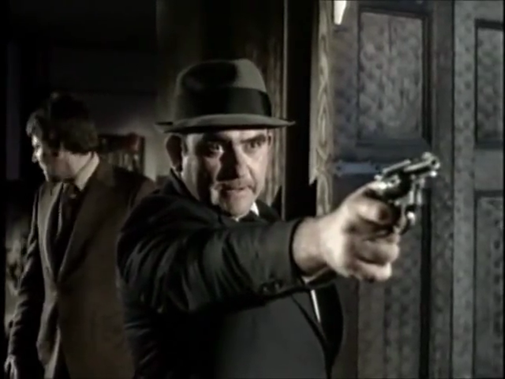 Still, even though we seem to be inching ever so slowly towards the police state depicted in The Last Child, it’s hard to get too scared because of passages like this week’s first reading from Isaiah which was directed towards the Jews who had been subjugated in Babylon for decades:

"Thus says the Lord: Say to those whose hearts are frightened: Be strong, fear not! Here is your God, he comes with vindication; with divine recompense he comes to save you. Then will the eyes of the blind be opened, the ears of the deaf be cleared; then will the lame leap like a stag, then the tongue of the mute will sing. Streams will burst forth in the desert, and rivers in the steppe. The burning sands will become pools, and the thirsty ground, springs of water."

So, perhaps it will one day get as bad as what we see in The Last Child, or maybe even worse, such as what we currently see happening in Syria (don’t forget to pray for those folks daily), but evil eventually gets its just due in the end. And when that day comes, things will be even better than before. The lame won’t just walk, they’ll dance in the streets. The mute won’t just talk, they’ll burst into song. There’s a better tomorrow out there, be it next week or a few generations away, we just have to stick to what is true and good right now.

NOTE: Sadly, since The Last Child is a made-for-TV movie, there’s no trailer available, but hey, the whole thing is on YouTube, so watch away.

I remember seeing it when it came out on TV. One of those few TV movies that has actually stayed with me as a rather unique plot at the time.

Understandable. It's one of those rare ones that works both as a story and as a discussion starter. At least it did for me.