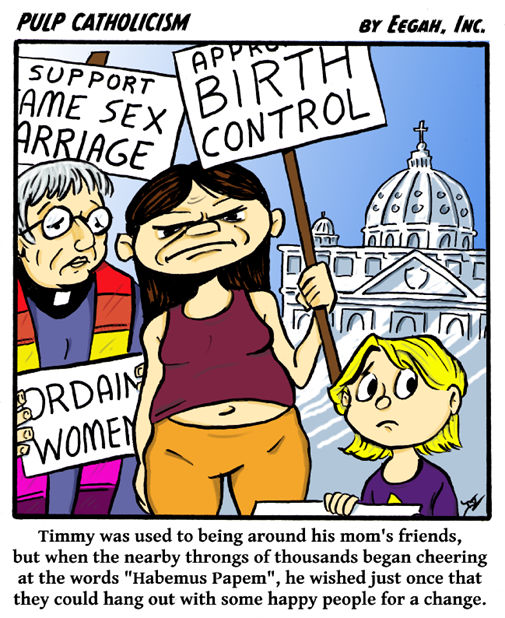 This is one I drew back in March 2013 when Pope Francis was first elected. The tendency of the networks at that time to concentrate their coverage on a handful of protestors while ignoring the throngs of happy thousands gathered in St. Peters Square was painfully transparent. Equally obvious was just how miserable those pitiful protestors seemed in comparison to the joyous Christians they were railing against. I’ve actually experienced this dichotomy firsthand during the various Walks For Life I’ve participated in. One year, during which two sad middle-aged women dressed in vagina costumes stood on the sidewalk screaming obscenities as we marched by, is particularly etched in my mind.

The tactics have changed for Pope Francis’ visit to the States, though. Instead of concentrating on the protestors, the networks are instead working overtime to spin the Pontiff’s words to support their desired narrative. And I suppose I have to grudgingly admit that to some degree they’re succeeding. Still, it’s taking some creative editing on their part, as the Pontiff I’m hearing is doing his best to deny the political gain anyone hopes to make out of his words. Take his speech to Congress, for example, which was a master class in deflating the sails of the political class.

POPE: We must address the problem of climate change for the good of the family.

POPE: An institution, by the way, which your policies are destroying.

POPE: We must also recognize the sanctity of human life at all stages of development.

POPE: Which includes, by the way, the lives of every rat bastard on death row.

The point is that the paltry platforms of political parties pale in comparison to the moral demands of religion. As the Catechism states, “The diversity of political regimes is legitimate, provided they contribute to the good of the community… The common good consists of three essential elements: respect for and promotion of the fundamental rights of the person; prosperity, or the development of the spiritual and temporal goods of society; the peace and security of the group and of its members.” Let’s be honest, none of the Frankenstein patchwork of “values” put forth by either party comes close to meeting all of those requirements, so it was kind of amusing to see His Holiness, however gently, call them on it. Naturally, the news selectively edited his comments later for their highlight reels, but still, it was fun while it lasted. Of course, I’m a Christian, so I can always find some reason to smile.

I was drinking coffee when I read this & I kinda lost it at the paraphrase. You're really on a roll lately.

The world is making it surprisingly easy to be on a roll.