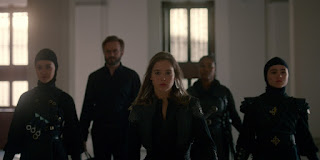 First off, Netflix, if you’re going to title your show Warrior Nun, at least have the common courtesy to make your title character a nun. Keep her angsty teenage girl snarkiness to appeal to the CW crowd if you must, but out of respect for your audience, make your warrior nun a freaking nun. Or change the name to Warrior Angsty Snarky Teenage Girl Who’d Rather Die Than Be A Nun. One or the other, your choice.

Anyway, about the show. Very, very loosely based on the old 90’s comic book series Warrior Nun Areala, Netflix’s new series eschews most of the titillating nunsploitation elements of the source material and dives deep into the waters of YA fantasy wherein lies the likes of reluctant chosen ones, doe-eyed first loves, and the nigh unbearable wokeness of all things under twenty years of age.

It begins with Ava, our heroine, quite dead. When a battle between good and evil breaks out near her corpse, some actual warrior nuns decide to hide an angel’s halo inside Ava’s spine. This resurrects Ava and gives her super powers, which should make her THE warrior nun but, of course, Ava will have nothing to do with any of it. She goes on the run, eventually hooking up with an obligatory diverse crew of kids that includes the requisite trannie and a love interest who exhibits not a trace of toxic masculinity. Not one single lovable trace.

Alas, pursued by demons and an evil corporation (is there any other kind) who both want the halo for their own reasons, Ava is eventually forced to return to the nuns, who try to train her to be a Vatican-sponsored Buffy. Unfortunately, it looks like even the Church covets the halo for its own nefarious purposes, so Ava and a few righteous sisters are compelled to disaffiliate and fight for the truth on their own. Or so it seems.

The series’ saving grace is a final episode revelation that turns most of the preceding narrative on its head and piques enough curiosity to make the thought of watching the start of Season 2 (if there is one) bearable. It sure does take its sweet time getting there, though. For most of the first ten episodes it’s spotty writing, sketchy acting, generic action, and enough anti-Church drivel to last five seasons, much less one.

It’s silly, really. Warrior Nun is another one of those stories that despises the Church, but also couldn’t exist without it. Sort of like most atheists when you think about it. But much like many such young non-believers, the series hints that it may find its way back to the Church as it ages. We’ll see next season.