NOW SHOWING AT A BLOG NEAR YOU: CRUSHING THE SERPENT’S HEAD AT THE DRIVE-IN 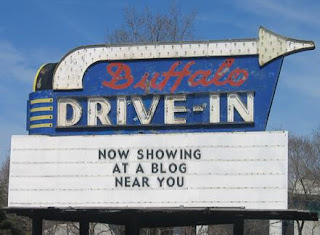 In what will surely come as to no surprise to anyone, we at the B-Movie Catechism are big fans of drive-in theaters. That’s why it was with great interest when the following email arrived from one of our regular ticket buyers, Brett Fawcett, who has graciously given us permission to reprint it here.

“I just stumbled across a random piece of information that I need to share with somebody but I can't imagine who would possibly care about this other than you, so here it is--apologies if you already know this.

You're surely aware of the Cinema Snob; it's been a long time since I've watched any of his videos, but a weird nostalgia kick made me pull a couple of his old reviews up. His reviews of The Geek and Bat Pussy, both of which were released by Something Weird video, feature an excerpt of an introductory disclaimer video from the 70s featuring Donn Davison at his office desk warning the viewer that they are about to watch an adult film, but, if they're into that, they can see the very best explicit entertainment "every week at the Dragon Art Theater." That introductory clip can be seen here.

I wondered what the deal was with this place, so I looked it up; apparently it was a drive-in theater in Florida that often got in trouble with local law enforcement (predictably)--I guess a sheriff's underage son got in at one point--and finally Davison found it was more trouble than it was worth and sold it--to, of all people, Father Roland Julien of St. Madeleine's Roman Catholic Church, who immediately retooled it to show family-friendly entertainment. The news article announcing this at the time is here.

This bizarre but somewhat heartwarming anecdote is so interesting to me, but you are absolutely the only other person in the world I can imagine possibly caring about the intersection of cinematic sleaze and ecclesial sanctity in this way, so I'm dumping this knowledge on you. I am put in mind of Chesterton's adage: "Pornography… is not a thing to be argued about with one’s intellect, but to be stamped on with one’s heel."

I hope all is well with you. Please keep my wife and I in your prayers. (We have been in China for 2 years now, unable to leave because of border and work restrictions.)

While we mourn the passing of yet another drive-in, we can’t think of a better use for the space than as a place of worship and devotion. Thanks for the great story, Brett, and you can be sure the prayers are on their way.