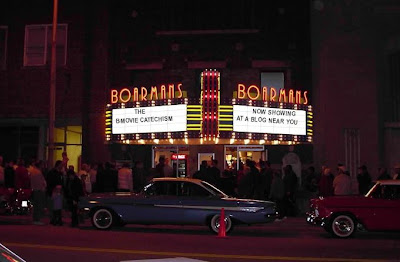 The Sci-Fi Catholic continues his tour of Asia with the Jet Li opus The Legend. He also takes a look at some little films you may have heard of by the name of Transformers and Harry Potter and the Order of the Phoenix. If you blinked you might have missed the hundreds of millions of dollars they made worldwide during their respective opening weeks.

Speaking of that Potter kid, The Mad Tea Party's March Hare also got a chance to take the kids for a look see. But imagine our surprise when we discovered The Mad Tea Party had also risked a viewing of that Justine Bateman/Julia Roberts classic Satisfaction. The March Hare gives it 2 golden tickets out of 5, which is probably still kinder than our own review.

As long as we're discussing movies we've reviewed before, poor old Man-Thing manages to garner a few more comments over at Arkanabar's Eclectic Rants. None of them favorable. For balance, though, he gives Man-Thing's fellow Marvel universe resident Ghost Rider a bit more respect.

If you've got wee ones and think wizards, giant robots, and skull-headed bikers might be a little too much for them, then you might be interested in The Happy Catholic's take on Pixar's latest release Ratatouille. It's nice to see, though, they didn't forget our own little dark corner of the blogosphere with a quick review of Shaun Of The Dead.

Shaun? That reminds me. I've recently been taking a trip down nostalgia lane with season 2 of the Hardy Boys/Nancy Drew Mysteries, so be sure to check out Catholic Fire's review of the latest incarnation of Nancy Drew starring the niece of Che Lovell's favorite actress. They give it a B (our favorite letter), but I don't know. I bet it doesn't have a single scene designed for no other reason than to let Shaun Cassidy sing. (Maybe that's a good thing?)

That's it for this trip to the multiplex. See you next time.
Posted by EegahInc at Monday, July 16, 2007

Thanks for the links. But you didn't suggest what I should rename The Blog Nobody Reads.

And as for Man-Thing, I send people to you -- as I said, your review was much deeper and more insightful than my own. After all, I didn't ever read the comic, as I know you did.

Now Justice League was good stuff in the 80s and 90s, when I read it. MCP Guy Gardner running around with Sinestro's yellow ring, being hysterically funny as only the most politically incorrect of characters can be.

I meant to add, I think I am thankful that I've never heard of the pilot you mention until now, given how unspeakably vile it must have been. Perhaps even as vile as destroying Captain America.

Come to think, all the movies about him did that too.

If you ever make it to a Comic Convention you can easily find the Justice League pilot. It only aired on European television and has never had an official video release. It was basically the show Friends with costumes with Guy Gardner as the Joey character. I'm getting ill just typing about it.