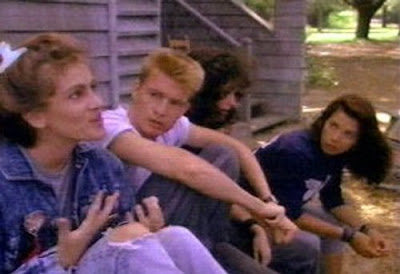 "Director Joan Freeman stages the movie with little imagination, and the script (by Charles Purpura) couldn't be more formulaic if it was simply a blueprint (and perhaps it was)." - DSH, The DVD Journal

High school is over and Jennie Lee and The Mystery, an 80% all-girl cover band from the big city, have a dream. They know in their hearts if they can just make it to the beaches of South Carolina and land a gig as the house band in ex-record producer Martin Falcon's club, then international stardom can't be far behind. (Because nothing opens more doors than playing two sets a night in some has-been's bar in Hicksville.) The band initially makes a small misstep by BREAKING INTO MARTIN'S HOUSE, but manage to rectify things by blowing the crowd away with their audition the following night. (Because nothing brings the house down like a tepid 80s cover of Knock On Wood.) The job secured, the band's future seems set, but all is not well. Each of the young ladies is carrying weighty emotional baggage which threatens to derail the Mystery train before it evens gets a chance to leave the station. (Because nothing says overly clever self-impressed movie reviewer better than sentences like that.) Jennie's brother gently describes the situation as, "Your guitarist is a junkie, your drummer is a thief, and your bassist, on a good day, is a slut!" Jennie herself faces the impossible choice between college, her May-December romance with Martin, and becoming a rock star. It's coming of age time for the girls as the days of Summer wain and life-altering adult decisions must be made quickly.

Ever since Gidget first climbed on a surf board way back in 1959, carloads of movie girls have made pilgrimages to the beach in order to learn everything about life over the course of one Summer that 16 years at home just couldn't seem to teach them. The king... er, queen of these movies is still 1960's Where The Boys Are in which four very different girls spend Spring Break in Ft. Lauderdale and learn some very hard lessons indeed. Over the years there have been a number of variations on that simple theme, and Satisfaction... is just another one of them. In this case, they do try to change things up just a bit by having the girls be members of a garage band, but in the end it's still the same old thing recycled into a new package. And that's the problem with Satisfaction; the movie isn't really bad, it's just SO mired in overdone clichés that it commits the one unpardonable sin of motion pictures. It's boring.

The blame rests entirely with the lazy script which isn't brave enough to push the stereotypes to the extreme necessary to at least make them entertaining or memorable. In fact, it really seems like the screenwriter takes great effort to squelch any hope the actors might have of developing the characters into someone interesting. Mooch is supposed to be the rough lowlife girl, but her criminal behavior goes no further than carrying a small pocket knife and stealing some money from a candy machine. Billy is supposed to be the druggie, but she never once appears stoned until her big "near death" scene requires it. (And even here a "near death" overdose looks a whole lot like "really sleepy".) Daryle is supposed to be the tramp, but she has sex with a grand total of ONE guy during the whole movie, her steady boyfriend. And as for Jennie Lee, she's supposed to be a combination of the smart and rebellious girl, but smart girls don't jump straight into relationships with guys old enough to be their father's father, and rebellious girls do more than give the principal the finger during their valedictorian speech. (You can get that behavior from some of the teachers these days) This kind of fluff might work fine for one of those old afterschool specials (CBS Schoolbreak Special to be specific; the screenwriter's previous assignment), but it's not very rock and roll.

There's just no way for the actors to overcome the script, which is a shame, because there's actually a surprising amount of real talent being squandered in Satisfaction. Britta Phillips (Billy) would leave this movie behind to become both the voice of Jem in the popular late 80s cartoon and the bass player for the indie pop band Luna. Trini Alvarado (Mooch) went on to a number of well received supporting roles in better movies, most recently in the excellent Little Children. Liam Neeson (Martin Falcon) was, of course, eventually nominated for (and cheated out of) an Academy Award for his portrayal of Oscar Schindler. The movie's headliner, Justine Bateman (Jennie), had already garnered a couple of Emmy nominations for her television work. And on top of all that, Satisfaction gives us the first credited appearance of Ms. Erin Brockovich herself, Julia Roberts, as Daryle the bass player. Oh sure, Julia's new and a little unpolished in this film, but she's a far cry from bad. And all her star making potential is there; the hair, the laugh, that patented nervous wringing of the hands thing she still does to this very day. Right there in the beginning you can see the hints of a mega star just waiting to make a splash on tabloids the world over.

It just goes to show you never can tell. You see, by all accounts, NBC funded this movie with the hopes of jump starting Justine Bateman's big screen career. It seemed like a no-brainer since her Family Ties costar Michael J. Fox had recently become a huge box office star himself and had even just released his very own rock and roll movie with 1987's Light Of Day. (I like to imagine that if both films had been bigger hits we might have seen some Freddy vs Jason type crossover where The Mystery and The Barbusters were forced into a battle of the bands to see who would get to play at Nelson Mandela's prison release party or something like that.) But, in the end, fate decreed that, rather than Ms. Bateman, it would be an unknown supporting actor in one of the most thankless roles Satisfaction had to offer who would go on to become the highest paid actress in the world.

It's just inevitable, what with over 120,000 members in the Screen Actors Guild alone, that most performers will never get to be the superstar with their name shown before a film's title. For the most part, they're considered lucky if they end up buried somewhere in the end credits with a character name like Man At Window or Girl #3. Sometimes, like Julia Roberts in her first big screen "appearance" in 1987's Firehouse, they don't get a credit at all. As a Christian, I can sympathize with that a little. At last count there were about 2.1 billion people who claimed Christianity as their religion. And that's just among the living. The total number of Christians since the inception of the religion is... well, I imagine it's a pretty darn big number. But despite that, the Church only recognizes just over 10,000 people from throughout history as official beatified Saints with a capital "S". Even if you were narrow it down to just the 1.1 billion living Catholics in the world today, that would mean only 0.00001% of the membership roll gets star billing. The rest of us are lucky if we get a small speaking part. For the most part, historically speaking, we're all walk ons.

And that's just fine. Among the generally accepted rules in storytelling is that one of the primary functions of a minor character is to accentuate something about the main protagonist, usually some defining character trait, through their interaction together, no matter how brief. Take the moment in John 18, for instance, when the high priest's slave Malchus tags along with the soldiers on their way to the Garden of Gethsemane to arrest Jesus. Out of nowhere, completely against Jesus' wishes, Peter takes a swing at one of the soldiers with a sword, misses, and lobs off Malchus' ear. Well, that's just swell! Fortunately, Jesus is there to put things right. And it turns out that Malchus' presence allows us to see a number of things about Jesus' character we're meant to emulate including mercy towards our enemies and the ability to offer comfort to another person even in the midst of our own worst moments. His ear reattached, his cameo appearance over, Malchus fades away into history never to be heard from again.

In the Catechism we read, "I believe in God": this first affirmation of the Apostles' Creed is also the most fundamental. The whole Creed speaks of God, and when it also speaks of man and of the world it does so in relation to God. The other articles of the Creed all depend on the first, just as the remaining Commandments make the first explicit." God is the main character, the box office draw, in all of this and the rest of us are just the supporting cast. Whether we're some big name Saint writing the Summa or just some unknown jackass writing a blog about bad movies, we can ask nothing more than that our lives in some humble way accentuate something positive about the nature of God.

True humility is a virtue, of course, but like all virtues, it too can be corrupted. G. K. Chesterton reminds us, "what we suffer from to-day is humility in the wrong place. Modesty has moved from the organ of ambition. Modesty has settled upon the organ of conviction; where it was never meant to be. A man was meant to be doubtful about himself, but undoubting about the truth; this has been exactly reversed. Nowadays the part of a man that a man does assert is exactly the part he ought not to assert—himself. The part he doubts is exactly the part he ought not to doubt—the Divine Reason."
Posted by EegahInc at Wednesday, July 04, 2007

Yet another fine review, but I must comment on your comment about Malchus. He does manage to play a significant part in Christian folklore--specifically, he is identified with the unknown servant who slapped Jesus during his trial; as punishment, he is immortal until the end of the world. Usually, he was depicted trapped in a cell in Jerusalem where pilgrims or warriors saw him during the Crusades; the Muslims tried to keep him hidden because anyone looking at him would instantly convert to Christianity.

According to a folklorist whose name escapes me at the moment, it was probably the legend of Malchus, combined with the legend of St. John the Apostle (an immortal heresy-hunter in yet another strand of folklore) that gave rise to the legend of the Wandering Jew, who still gets occasional nods in today's science fiction literature.

Was that Malchus? Cool. It seems like they called him something different in the Demi Moore epic "The Seventh Sign", but then again, that's probably not the best place to go for accurate biblical or folklore studies.

Oh well, if I ever revise the review, I've got plenty of other minor characters to choose from. I actually ran across an encyclopedia of every character in the Bible on Amazon, but it's $100+ price puts it a little outside the budget right now.