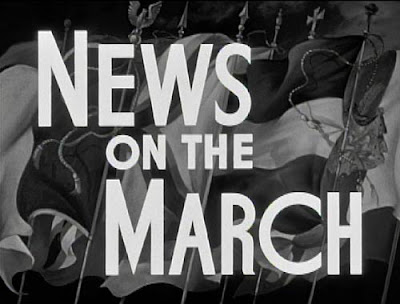 Good evening Mr. and Mrs. Catholic and all you other Christians at sea. (While not required, it would help if you read this in your best Walter Winchell voice.) Welcome to the inaugural edition of The Weekly Newsreel, our rather snarky new feature here at The B-Movie Catechism designed to further enhance that old Saturday Matinee experience. Each week our intrepid news hounds will scour the headlines for breaking news in the world of movies and, more importantly, movie stars, in order to filter them through a little catechesis. Remember, today's gossip is tomorrow's bible study. Now, let's go to press.

USA Today reports that actress Tori Spelling recently received her minister's license after applying for one online. Her first act as an "ordained" minister was to perform a same-sex union which will likely be shown on Inn Love, her "reality" show currently being broadcast on the Oxygen network. (Yes, that's Oprah's channel.) Ms. Spelling notes, "I was so honored when the couple asked me to officiate. We did it on the front steps of the Chateau as 40 of their friends looked on seated in a loungelike atmosphere." Oddly enough, this same week, Pope Benedict XVI released a document which among other things reaffirmed the Catholic Church's teaching on apostolic succession as stated in the Catechism: "In order that the full and living Gospel might always be preserved in the Church the apostles left bishops as their successors. They gave them their own position of teaching authority." Indeed, "the apostolic preaching, which is expressed in a special way in the inspired books, was to be preserved in a continuous line of succession until the end of time." Coincidence? You be the judge. Meanwhile, Martin Luther, poster boy for the self-proclaimed Protestant Reformation, was unavailable for comment on this story as he is currently spinning in his grave.

From Total Film we learn that ex-seminary student Tom Cruise has run into a roadblock with the German government over the filming of his upcoming movie Valkyrie. Because of Mr. Cruise's affiliation with Scientology, the German Defence Ministry has decided not to open military sites to the production for the filming of certain key scenes. Scientology, as you may know, is not considered a religion by the German government, but rather a predatory commercial enterprise with cultish overtones. While offering no ecumenical support for the freakish teachings of Scientology, we do acknowledge the Catechism when it states, "The right to religious liberty is neither a moral license to adhere to error, nor a supposed right to error, but rather a natural right of the human person to civil liberty, i.e., immunity, within just limits, from external constraint in religious matters by political authorities." So, rather than jump for joy over the dissing of the barely tolerable Mr. Cruise (who's been on a steady decline since his excellent performance in Taps), The B-Movie Catechism casts a wary eye towards any instance where a religion is declared an enemy of the state. We Catholics have been there, done that, and have no desire to go back. We wouldn't want to create any more Guy Fawkes now would we? (Because Guy Fawkes invariably leads to V For Vendetta which leads to bald Natalie Portman, and no one wants that.)

And finally, in more somber news, Film Threat is quick to point out that Good Morning America's beloved Joel Siegel, who recently succumbed to colon cancer, is just the latest in a string of such passings among movie critics. The past few weeks have also brought us the deaths of E! Online's Andy Jones and SuicideGirls' Daniel Robert Epstein. You can find glowing tributes to each of these men scattered about the internet. I don't really have anything humorous to say here, I'm just a bit worried about, you know, some kind of trickle down effect or something. "He who guards his mouth protects his life; to open wide one's lips brings downfall." - Proverbs 13:3

And that's it for the first edition of The Weekly Newsreel. As the great Les Nessman used to say, "Good day and may the good news be yours."
Posted by EegahInc at Tuesday, July 17, 2007