SHORT FEATURE: STAR WARS – AN A CAPELLA TRIBUTE TO JOHN WILLIAMS (BOTH OF THEM) 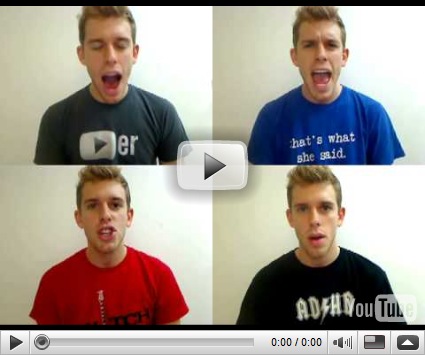 It’s been next to impossible to go anywhere on the Internet this last month without bumping into this excellent video by Corey Vidal. It’s become so omnipresent and omni-liked that it’s been nominated for a People’s Choice Award this year. Corey is actually lip-synching (by permission) to a 2002 recording by the comedy troupe moosebutter who have decided to release a new live video of themselves performing the song in their studio in hopes you’ll go to their site and buy a song or two. (For obvious reasons, we recommend Psycho: The Musical sung to the tune of Music Of The Night.) Here’s the new moosebutter version. 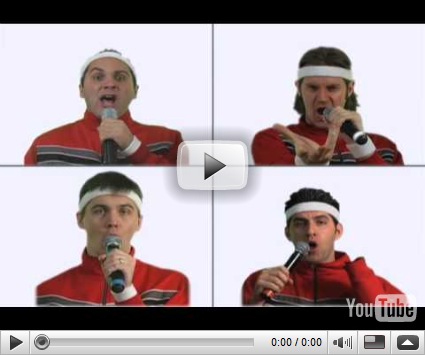 By moosebutter’s own admission, despite the fact that it’s their song, Corey's video has had literally millions of more views than moosebutter's. “That's because Corey is cuter, and smells better.” the group claims. Maybe. But perhaps there’s another reason. You see, even though moosebutter throws in some good gags in the new video to compliment the lyrics, they also can’t hide the fact that it’s after the fact. The new version is laced with the slightest bit of cynicism because, let’s face it, the new films weren’t quite what we all were hoping for. The original recording, in contrast, is saturated with something the new one can never have; joyful expectation.

I admit that I might not have picked up on the tone of the original version so easily were this not Advent, that time of the year we Christians indulge in an overabundance of joyful expectation. We have so much joyful expectation (at least we’re supposed to) around this season that we actually have holidays inside our holidays. “One of the most inspiring days preceding Christmas” writes Fr. Marian Zalecki, OSPPE, “is the feast of “Our Lady of Expectation,” unknown to many today, but still kept alive in many countries like Spain, Portugal, Italy and Poland as well as in a few religious orders… The feast is celebrated on the 18th of December, a week before Christmas Day… The Gospel message on this feast relates the story of the Annunciation. God asks a woman, his creature for a favor to be Mother of his Son, and at the same time, he respects her freedom. She is free to say “yes” or “no.” There is a moment of waiting in heaven and on earth: God waits for her answer, the heavenly messenger waits for her answer, the first parents Adam and Eve wait for her answer, all confined in hell wait for her answer. With grateful heart, we thank Mary, the Wise and Prudent Virgin, for saying “yes” to God on our behalf.”

I kind of like the idea of that old feast and wouldn’t mind seeing it make a reemergence here in the States. It kind of gives a double meaning to all that “waiting” we do in Advent. Yes, we wait in anticipation for the coming of our Lord, but at the same time He waits on us also, waits on our response to His call.

Posted by EegahInc at Wednesday, December 17, 2008

Whenever I maneuver a conversation around and come with my inevitable pronouncement to the effect that "Art is Dead" someone will always brings up John Williams thereby equating him with Handel / Beethoven / Mozart / Bach etc...

Maybe they are right, and John Williams is every bit the composer as Handel. But I doubt very much that the comparison will ever actually stick.

The reason isn't so much the technical failure of the artist, but in his audience and in his subject matter.

Because I think you are exactly right when you say we have lost that "feeling of joyful expectation" where the things that all the signs point to are finally fulfilled.

Even if the intent of the artist is to capture something eternal, some sliver of the ultimate Truth, we no longer expect anything significant to come about at all. Only another failure and dissapointment.

So our art turns into mockery.

Yeah, I don't think I could sign off on the idea that John Williams is on the same level of the composers you mentioned. What Williams was for me, and probably a lot of other people my age, was a gateway to classical music. The Christmas after Star Wars came out my parents bought me one of those old black handheld tape recorders and a cassette tape of the Star Wars soundtrack. I played that thing until it crumbled into dust and still know every beat and cue of the music by heart. From there, it was just a matter of tracking Williams' influences back to people like Beethoven and Wagner. So i owe him some respect for introducing me to that stuff. But calling him Mozart, I don't think so.

As for recovering the eternal from some of the movies I review, I do my best. If I manage it now and then it's certainly not due to any special talent on my part, but rather to the transformative affect of God on my life. Everything gets filtered through my belief these days.

Hey there, you Superior Scribbler, you! First of all, I'm not "spamming" you; I promise! Second of all, I'd like to introduce myself: I'm Melissa B., The Scholastic Scribe, & I'm the "Original" Superior Scribbler! Third thing on my mind: I've been nominated for a pretty prestigious blog award; I'd greatly appreciate your vote, so if you click on over to my place, you'll see the info. It's an annual award from EduBlog, and I'm up for Best Individual Blog. And 4th thing on today's agenda: I've got a cute "contest," of sorts, going on at my place every Sunday. Please come by this Sunday for the Silly Sunday Sweepstakes. And, thanks for your support!

I prefer an different interpretion of "Our Lady of Expectation"--a patroness for women in the last few weeks before childbirth. You know, the completely ridiculous stage of pregnancy.

My firstborn got the hiccups in daily Mass EVERY day for the last six mo., so I had to explain to my pastor what was up, 'cause I was making so many alarmed expressions during the homily. Do you notice none of the pictures of Mary & Joseph on the road to Bethlehem ever really show what a full term woman looks like??

Sorry to rant. It always gives me the heebie-jeebies this time of year that the birth of Jesus seems to get celebrated without any references to pregnancy or childbirth.
Xena C.

Hi Melissa, I'll be sure to take a look come Sunday.

Xena, I think the reason this particular feast dances around the pregnancy is that it was originally celebrated in March and is more linked to the Annunciation than it is Christmas. But you're right, there's still not too many references to late term pregnancy during Christmas.

Hmm, we'll have to something about that around here.