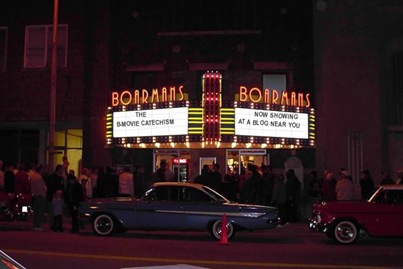 We haven’t done a Now Showing posting for awhile now, so some of these links may have a bit of dust on them. They’re not dead yet though (and even if they were, that’s not a problem here), so enjoy.

Let’s start with a little He Said/She Said. First up is Christian filmmaker Dallas Jenkins over at the Big Hollywood blog who asks a question we ourselves have often pondered, “Why are Christian Movies So Bad?” His answer includes the notion that “good art should always put story and character above message… [therefore] most Christian films aren’t going to be very good because they have to fall within certain message-based parameters.” Maybe. For Sister Mary Martha’s part, she would rather light a candle than curse the darkened theater. Over at her place, instead of heaping on more criticisms, Sister discusses what she actually likes about religious movies. Her number one reason: “I like all Bible movies for the hats.”

Despite her somewhat lenient criteria, however, even the good sister might have a hard time finding something to enjoy in the upcoming film Agora, a movie that, as the Catholic News Agency is reporting, “civil rights organizations are denouncing… for promoting hatred of Christians and reinforcing false clichés about the Catholic Church.” Having not seen the film (no American release date yet), I can only take the word of critics who are complaining that the film takes more than a few liberties with history, recasting  the Neoplatonic 4th century Hypatia of Alexandria as a brave Dawkins-style atheist martyred by science-hating Christians for her insistence on teaching empirical investigative methods. Most sources indicate that while Hypatia’s killers were (inexcusably) Christian, their motives were entirely political; no religion or science involved at all. Again, that’s just the advance word, so the movie could turn out to be okay, but for some odd reason in this Dan Brown infested world, I just don’t trust it to get the facts straight. (Maybe it’s things like Penn & Teller. You think?)

Perhaps it’s pretentious propaganda like Agora that is part of the reason I watch the kinds of movies that I do. The people who make B-movies rarely try to hide the fact they’re crap. Take the SyFy Channel’s Craig Engler for example, discussing his company’s penchant for churning out low budget schlock like Man-Thing and Mega Shark Vs. Giant Octopus. “The joke title we always talk about wanting to make is Sharktopus (half shark, half octopus!).” he noted recently on Twitter. “It's more fun to say out loud than to read.” He’s right. Shark-toe-puss. I would totally watch that without a minute’s hesitation.

Speaking of goofy titles, Fr. Philip Neri Powell took in Zombieland last week, and along with a few laughs, it also caused him to ruminate on zombie, as well as Mayan, apocalypses. Unfortunately, as The Curt Jester points out, we may not need to wait a few years to see such sights as THE ZOMBIES ARE ALREADY AMONG US!

And on that cheerful note, I’ll leave it with you until next time.

The presence of the dreadful Woody Harrelson has kept my interest low, but it IS a zombie movie apparently. What say you? Is it worth putting the clothespin on the nose and seeing it?


By the way, I finished the book, Day by Day Armageddon. If you like either zombie stories or post-apoc lit (and asking questions like, "why do the protagonists ALWAYS stumble upon a fully-stocked military compound?), give it a read.

I'm a wait for the DVD type of person, so I won't see Zombieland till it hits Netflix. Father Erik over at Orthometer has been raving about it for days, though.

I loved World War Z, so Day By Day sounds like a winner. Thanks for the heads up.