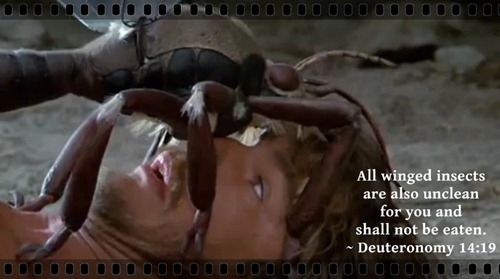 hey! I think I saw that one! I don't recall the name of the film, but I remember the production team was so small, the guy who drove the port'o'potty was listed in the credits.

It's Ringo Starr's Caveman. I wouldn't be surprised if the guy who drove the port'o'potty actually directed the film. (Which doesn't stop me from watching it lots, mind you.)

Nope. This was actually a modern Western with mutated mosquitoes that were killing people: bubbling pools of toxic waste, tacky model bugs, corrupt sheriff, a complete lack of acting ability...I thought it had some dorky name like "Bzzzz" but I couldn't find it on the data base. Ring any bells?

Kinda scary it could be mistaken for another movie.

The only thing that jumps to mind is the Syfy movie High Plains Invaders, but those bugs might be too big.

I think it was "Skeeter" & on closer inspection, the bug in the 'Caveman' still is way better. A painfully sincere B-movie with bad special effects made worse by the addition of low-budget animation. But apparently, a competent professional drove the "honey wagon" on location.

Sorry, I thought you meant wild, wild west cowboys. If you mean modern day, then Skeeter is probably your movie, although there's a small chance it could be Mosquito starring the original Leatherface from Texas Chainsaw. (It probably comes as no shock that I own both on DVD.)