THE B-LIST: MOVIES TO GIVE YOUR CHILDREN NIGHTMARES (OR THE GIGGLES, YOU NEVER CAN TELL WITH KIDS)

It’s that time of year again where Christian parents try to find some scary movies to share with their kids on Halloween that won’t compromise their youngsters moral development or traumatize them into needing years of therapy. Over at the NCR, Simcha Fisher has a post up addressing the topic entitled Twelve Movies To Terrify Your Kids, and she has some nice suggestions such as Arachnophobia, Tremors, and The Birds. But of course, this blog being what it is, I couldn’t help but think of a few more PG rated goodies that fit the bill. 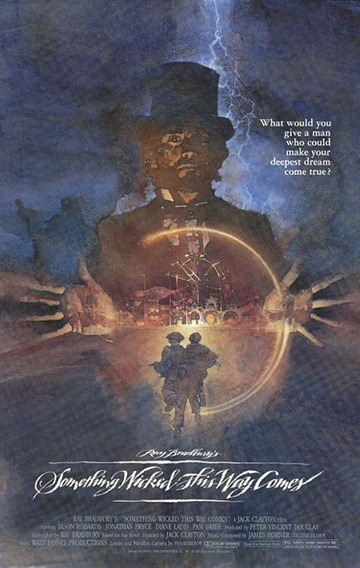 SOMETHING WICKED THIS WAY COMES

Fans of the original Bradbury story are usually a little let down by this Walt Disney adaptation and even non-fans will spot plenty of flaws, but for the little ones this is a pretty decent creepfest. You’ve got a bed full of spiders, the devilish Mr. Dark and his spooky lady friend The Dust Witch, and even some glimpses into the terrors of old age. And it’s all set in the month of October, so the timing is just right. (Disney’s The Watcher In the Woods makes a fine double feature with this, by the way.) 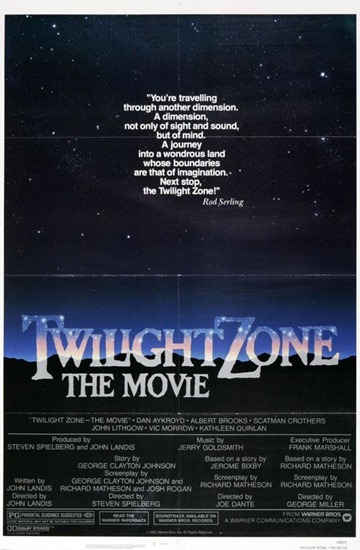 Oh sure, if you can get your kids to watch the classic black and white television series, then by all means do so. Their IQ’s will thank you later. But if the little darlings just have to have color in their movies, then this Spielberg produced homage is the next best thing. Sufferers of ADHD may zone out (slight pun intended) a little during the first couple of segments (old people kicking a can, zzzzzz), but if you can get them to hang in there until Joe Dante’s cartoonish It’s A Good Life and George Miller’s over the top Nightmare at 20,000 Feet, you’re guaranteed to get some shrieks and laughs from them. 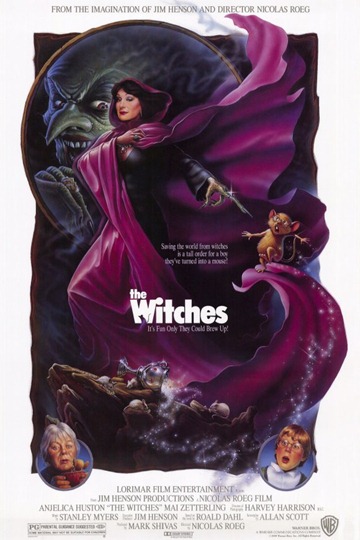 Based on the book by Roald Dahl (who knows a thing or two about creepy things), this is the kind of movie that parents find amusing and entertaining, but which gives many kids the absolute heebie jeebies. Anjelica Huston in full nose and warts makeup… pure nightmare fuel. 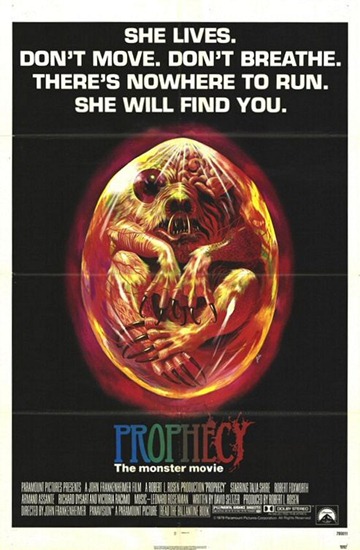 I know, a late 70’s ecological horror movie may sound like a weird choice (okay, it is a weird choice), but hear me out. The monsters are icky, some of the bad hairdos are back in fashion, and the film has a surprisingly pro-life undertone. And besides, once your kids see the sleeping bag scene, they’ll thank you for the rest of their lives. 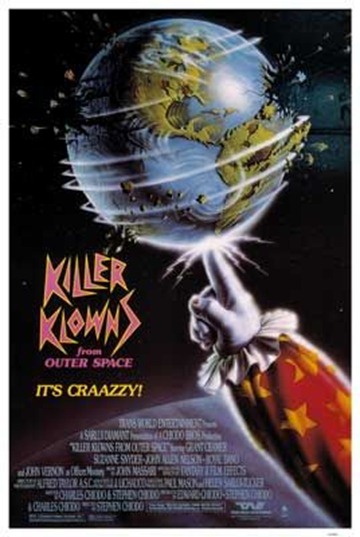 Okay, so this one’s rated PG-13, but come on, it’s Killer Klowns. The whole setup is like Goosebumps on steroids. Space aliens resembling circus clowns descend upon a town and begin collecting the citizenry in order to turn them into cotton candy. They’re armed with carnivorous popcorn ray guns, flesh dissolving ice cream, and a very lethal version of the old spring loaded boxing glove in a gift box gag. Plus, did I mention that they’re clowns. Haven’t you people ever heard of coulrophobia? 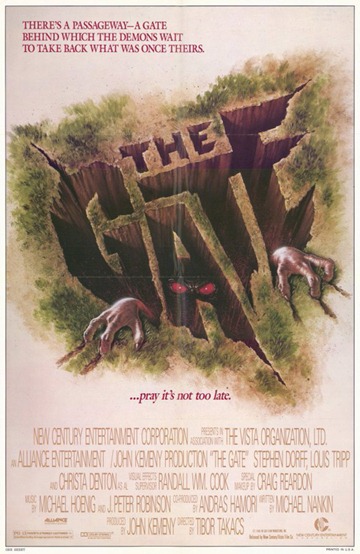 Another PG-13 goodie, this time just because it’s probably a little too creepy to be PG. Not many kids will be able to resist this tale of some young pre-teens who get left at home by themselves for the weekend and accidentally end up unleashing a pants load of pint-sized demons from a hole in their backyard. The effects are top notch for such a low budget movie and there are some genuine scares (most notably the dead workman living in between the walls), but the big surprise is that all of the kids are actually likable. Try and find that in more recent films. 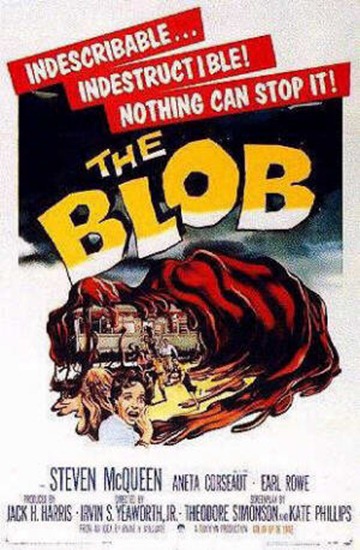 And to close things out, it’s hard to go wrong with a classic. Now if your kids are old enough to handle extreme gore, I would almost suggest the 1988 remake, but it’s really unnecessary as the original is just fine the way it is. The Blob is one of those monsters that kids laugh until later when they’re alone. That’s when they start thinking about it seeping out of a faucet into their bath or oozing underneath the window seal next to their bed. Yes kiddies, it creeps and leaps and glides and slides…

Going for Creepy-Humor rather than Creepy-Horror: Mad Monster Party with the wonderful voices of Phyllis Diller and Boris Karloff. It's a musical, with puppets. And don't forget Snow White and the Three Stooges - it's a musical. On ice. Did I mention it had the Three Stooges? And the witch is suitably creepy, especially with the apple. Then there are the two versions of The Little Shop of Horror. In the Creepy-Horror department: a neglected favorite - Island of Terror with Peter Cushing. The part where his hand is cut off is unexpected. The original Dracula with Bela Lugosi. Did you ever see it in Spanish? Different cast, same sets, filmed at night when the Lugosi cast was not using it. Not exactly a B-Movie - but for maximum creepiness, Nosferatu. And the music is wonderful.

Out of all those the only one I haven't seen (YET!) is, believe it or not, Snow White and the Three Stooges. The rest are all great. You know, I'm curious as to whether or not the generations that have grown up on quick cut editing could sit through Lugosi's Dracula. I love it, but by today's storytelling standards, it is sloooow.

I'm still- STILL- scarred by the scene in Something Wicked where the creepy man in the top hat (fuzzy on details here) had the drawing of the boy on his palm, then he closes his hand and digs his nails into the drawing so deeply the blood falls on to the boy's face, who happens to be hiding right beneath the man...?

I don't know. I saw that scene when I was, what? 9? 10? And it's second ONLY to the scene in Wrath of Kahn with the giant earwig thingie.

The things that scare you that deeply when you're a child scare you forever, I guess.

My kids are all waaaaaay too sensitive to watch ANYTHING vaguely scary. "The Empty One" episode of Doctor Who results in them sleeping on my floor for the next week- a flat out horror movie (even a kid-friendly one) would probably give them all heart attacks.

That's one of my favorite scenes from the whole movie. Jonathan Pryce as Mr. Dark just nails a perfect combination of menace and gentlemanliness.

Our kids love the original Dracula. It's the creepy atmosphere and music that makes it something they experience rather than just watch.

Hahaaa. One of my kids had nightmares that Krull (the giant octopus from Doctor Who) was under her bed, until her sister pointed out that it wouldn't fit. She grew up into an avid Doctor Who fan - both old and new series.

That's great to hear about Dracula. Maybe culture will survive Michael Bay after all.

Now I have Lugosi's "The children of the night, what beautiful music they make." in my head. Anybody in Hollywood today who could deliver that line? Don't think so.

I'm sure that comes as a big surprise.

Cari, me too! Just reading your description of that scene sent shivers down my spine.

My kids aren't very sensitive, so I think it's time to show them some of the movies on this list. We have the entire Twilight Zone set on DVD and they watch that all the time and love it.

How have I not come across this blog before now? I love it!

Uh, I accidentally left the wrong URL in my comment above, so I feel like I need to apologize to the person whose blog I actually linked to. Sorry! I sometimes forget the name of my own blog.

Rebecca, thanks for dropping by. All are welcome, all are welc... sorry, I was channeling my inner Zelda Rubinstein there for a second. It's great to hear that your kids like the original Twilight Zone. Between that and RS's kids loving Lugosi's Dracula (see above), it gives me hope for the next generation :)