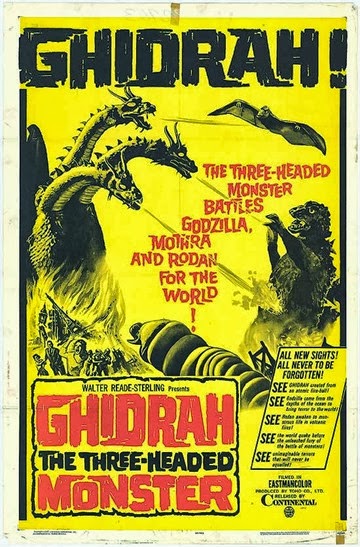 One of the first movies I ever reviewed here at the B-Movie Catechism was Gojira, the original 1954 Japanese version of Godzilla. If you’ve never seen the film in its uncut original form, you owe it to yourself to seek it out as soon as possible. Gojira is sci-fi at its finest, offering a combination of fantastical adventure mixed with insightful commentary on the human condition in Japan at the time the film was made. Viewing Godzilla in his original incarnation, it’s impossible not to see the monster as an allegorical representation of the physical and psychological damage the Japanese people suffered as a result of the atomic bombs dropped during World War II, as well as the subsequent atomic weapons tests that continued after the war ended.

But that was in 1954. Beginning with 1964's Ghidorah: The Three-Headed Monster, The Big G’s personality began to undergo a bit of a change. No longer was he portrayed as a mindless force of nature smashing his way through a helpless Tokyo. Instead, the King of the Monsters began to soften up a little towards the tiny creatures scrambling out of the way of his royal footsteps and actually started to protect them from others of his ilk. By the end of the 60’s, Godzilla was officially a good guy, a friend to children everywhere. Sure, he still managed to knock over more than his fair share of buildings while protecting mankind, but amidst the destruction he also managed to pass along lessons to his young viewership, instructing them in a wide range of topics ranging from the evils of bullying (Godzilla’s Revenge) to the dangers of pollution (Godzilla vs. the Smog Monster).

But what has that got to do with me, you might ask? More than you might guess. As longtime readers might recall, one of the primary reasons this blog was started was that it spurred me to study the Church’s teachings more, which in turn would (hopefully) make me a better teacher for the room full of high school juniors and seniors I was put in front of at my local parish. Life goes on, though, and a few years back a combination of health, work, and family issues required me to step away from my volunteer catechist duties for awhile. 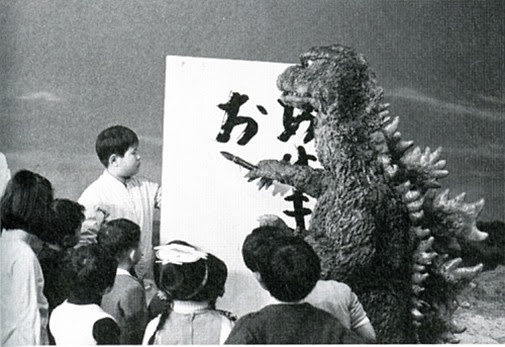 That’s right, I’ve stomped my way back into the classroom. Now it’s a bit different this time around for a couple of reasons. The first one is that, ostensibly, I’m only in there as an assistant, with the duties of formulating lessons and activities being somebody else’s responsibility. This is because my own child, who has Asperger’s, is enrolled in the class, and there’s the very real possibility that I might have to leave at a moment’s notice if he starts to have a meltdown. Thank God, after two sessions, that hasn’t happened yet. In fact, so far, he’s been the best behaved kid in the room.

Which brings up the other big difference. This time around, it’s not teenagers I’m locked up with, it’s a 5th grade class. And let me tell, you, I was not prepared for the sheer level of silliness, noise, and in-your-face disrespect we’re getting from a bunch of 10 & 11 year olds. Now I do feel a little sympathy for them. After all, it’s a 4:30 weekday class and most of the kids are picked up at school and then directly dumped into faith formation with no break, so I understand there’s some cabin fever at work. But still, the behavior I’ve seen so far goes beyond simple rambunctiousness. It’s such a tough room that the main teacher is already hinting around for a transfer to a younger age group and happily passed the second half of last week’s lesson to me to finish. It’s a mess. Or as I used to call it the first time around… business as usual.

As always, everyone involved will do their best to make sure these kids not only advance in their knowledge of the Church, but hopefully in their relationship with Jesus as well. It might be sloppy and noisy and a few buildings might get knocked over in the process, but God willing, it’ll get done. Pray for the catechists at your local Parish, folks, I’m sure they would appreciate it.

Eegah, since you chided us for not alerting you to "Sherlock"...are you reading the Galileo posts of Michael Flynn? He wrote "Eifelheim", which is so fabulous don't embarrass yourself by saying so if you haven't read it yet. Anyway, he's doing a great series right now you shouldn't miss:

The original Gojira in Japanese is indeed a fabulous movie. Available with subtitles in English, there is no longer a reason not to see it. And if it helps, I can't imagine a better Catechist than you - I do hope you are working with teens. They'd appreciate your humor.

I've been saving Flynn's series of posts into Evernote until I can give them full attention. They seem pretty dense, so I didn't want to just skim.

Alas, there are plenty better Catechists than me (thanks for the ego boost though). I'm pretty smart in front of a computer, but I fumble for words in real life just like most other people. But we're doing okay. In week one the only kid who could even name any of the sacraments was mine, coming up on week four they all actually compete to see who can blurt out all seven first. When they're not acting like wild apes that is. Baby steps.