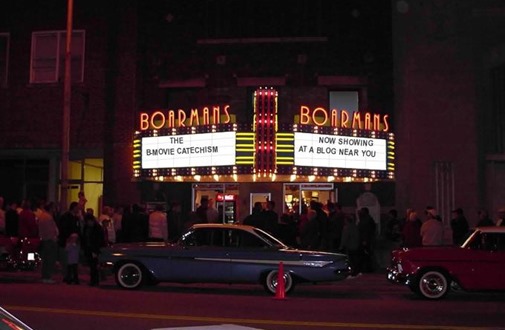 The most expensive zombie movie ever made AND a film about monsters going to college? Oh yeah, it was my kind of weekend. You can find out what I thought of World War Z and Monsters University over at Aleteia.

For whatever reason, despite it’s $200 million budget and the presence of two time sexiest man alive Brad Pitt, not a lot of Catholic reviewers out there seem to have gone to see World War Z. Or maybe they just don’t want to admit it. Monsters University, on the other hand (or claw, as the case may be), has a lot of fans. Among them are Catholic Skywalker, who also enjoyed it, and Jeffrey Overstreet, who takes the time to respond to Timothy Wainwright’s questionable concerns at Christianity Today that Monsters University may be dangerous for children to watch because monsters should be portrayed as evil, not lovable.

Meanwhile, over at Crisis Magazine, Sean Fitzpatrick appears to still be chaffing over last week’s release of Man Of Steel (which I still maintain is a good film), so much so that it’s caused him to take a critical look at the modern mythology of movie heroes. In a similar vein, Barbara Nicolosi, another non-fan of the latest Superman movie (I’m starting to feel lonely out here), has some ideas about why we don’t care about certain characters in modern movies.

If all that negative talk about what’s playing at the local cinema has you discouraged about the idea of plunking down money at the ticket booth, maybe you could rent something instead. That’s what the Happy Catholic did recently to somewhat pleasant results. She’s seems particularly taken, as have been so many others, with binge watching Doctor Who. I’m curious to see if she has the same reaction LarryD did once she reaches the later episodes where the gay marriage propaganda kicks in. After Larry had the audacity to express his displeasure at that development, some of the shows fans chimed in with some less than charitable comments.

You know what would be a good antidote to all that negativity, a short movie about seeking vocations made by nuns. And what do you know, The Daughters of St. Paul just happen to be trying to make one with a little help from SpiritJuice Studios. There’s still a few days to make a contribution over at indiegogo if you’d like.

And with that, we’ll leave you till next time. Happy reading.

The most disappointing thing about the dust-up at LarryD was the lack of basic research. Mark Gatiss, Moffett's right hand man for DW and for "Sherlock", is a publically gay man with a long-time lover. It's not exactly a mystery where this is coming from. And it's not like New DW & BBC News hasn't had some gratuitously anti-Catholic moments. None of this is news, and I'm hardly a die-hard, super informed fan. Context, anyone?

Sorry to vent, and

There's a very vocal group on numerous message boards right now demanding the next Doctor be gay. I wonder how that would go over?

I haven't seen Man of Steel yet, but it breaks my heart to think an eegah could be lonely. So here's a positive review of the same from another Catholic blogger:

Thanks for that. When I review movies for Aleteia, I purposely don't read any other reviews until mine is submitted to avoid borrowing. It can be surprising afterwards to find how someone saw the exact opposite of what I did in a film. Nice to know I've got some folks on my side out there.